In 2015 there were 36.7 million people living with HIV, the virus that causes AIDS. Over three decades, more than 25 million people have died of AIDS worldwide. Now there are finally signs of hope for an AIDS-free world.

Since the beginning of the epidemic in 1981, Maryknoll missioners in Asia, Latin America and Africa have ministered to people living with HIV/AIDS. We have accompanied people dying of AIDS, worked with children orphaned by AIDS, supported women and girls who are at risk of violence or sexual abuse, and witnessed the direct impact of debt and poverty on societies decimated by AIDS.

“If we invest just $3 a day for each person living with HIV for the next five years, we would break the epidemic for good,” said Michel Sidibé, executive director of UNAIDS. “We know that each dollar invested will produce a $15 return.”

According to the latest estimates from UNAIDS: 1.1 million people died of AIDS in 2015, a 45 percent decrease since its peak in 2005. Deaths have declined in part due to increased availability of antiretroviral drugs. Yet, HIV/AIDS remains the number one cause of death in Africa.

There were about 2.1 million new infections in 2015, a significant decline since the mid-1990s.

A growing awareness of the connection between HIV and tuberculosis has led to increased joint HIV/TB services. Between 2004 and 2014 TB deaths in people living with HIV declined by 32 percent.

Women represent half of all adults living with HIV worldwide. It’s the leading cause of death among women of reproductive age. Gender inequalities, differential access to service and sexual violence increase women’s vulnerability to HIV.

Globally, there were 1.8 million children living with HIV and 110,000 AIDS-related deaths of children in 2015. Since 2001, new HIV infections among children have declined by more than 70 percent.

The Scriptures show how people of faith should act in the face of the AIDS pandemic. Like the Canaanite woman and tax collector Zacchaeus, those with HIV/AIDS are often “outcasts.” They are paralyzed socially and economically by stigma, discrimination and exclusion. Our societies are also paralyzed when people have inadequate nutrition, national debt restricts access to education and services and trade agreements prevent access to life-saving medicines.

When the disciples urged Jesus to send the Canaanite woman away and the residents of Jericho accused Jesus of staying at the house of a sinner, Jesus demonstrated the Gospel message of inclusion. Who will love the marginalized today? Who will speak for our sisters and brothers who live with HIV/AIDS, for the children who are orphaned?

Join
the World AIDS Day prayer vigil on December 1. World AIDS Day is an opportunity to raise awareness, commemorate those who have died, and celebrate increased access to treatment and services. Sign up for a one-hour time slot during the 24-hour vigil.

Plan
a worship service on World AIDS Day or the weekend before or after. You can find materials at Ecumenical Advocacy Alliance. 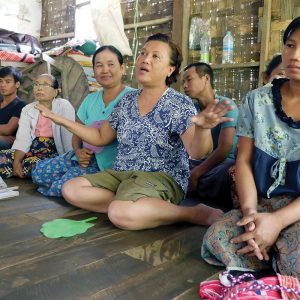 Woman from the Philippines shares spirituality and skills as a missioner in Myanmar || Emelita “Emily” Valdez is building...