" /> We Are Never Among Strangers | Maryknoll Magazine

In Christianity, the mercy of God is of such significance that Thomas Merton often spoke of God as “mercy, within mercy, within mercy.” Our whole sense of sin, forgiveness and redemption is inseparable from faith in a merciful God. Buddhism, on the other hand, does not speak of mercy in terms of a divine concept but rather as compassion at the human level as the relief of misery and suffering. Wisdom and compassion are the heart of Buddhism.

One of the Buddhist women students in the temple in Bangkok, Thailand, where I teach English, once told me a story that has stayed with me over the years. Malai said she had become a Christian at the request of her husband when they were married. Her pastor told her at that time that she must never again go inside a Buddhist temple because that would give people the impression she wasn’t a sincere Christian.

When Malai’s parents, who continued to practice Buddhism, were quite advanced in age, her father had a stroke and was unable to leave the house. Malai’s mother went daily to the temple to burn incense sticks and pray for her husband in front of the statue of Kuan Yin, the goddess of mercy, who represents the Buddha’s compassion. Kuan Yin’s name literally means, “The one who hears the cry of the world.”

When Malai’s mother herself became feeble, she needed support to walk into the temple to pay homage to the image of compassion. Malai would take her mother to the temple gate, but faithful to the injunction of her pastor, she had to ask strangers to take her mother inside the temple itself and help her light the incense sticks and worship.

It broke Malai’s heart that she had to rely on the kindness of strangers to assist her mother in this way instead of doing her duty as a daughter. An important obligation for women in Buddhism is to care for their mothers in this life. One day while waiting for her mother to return from going to her prayers on the arm of a stranger, Malai began to weep. A Buddhist nun who was sweeping the forecourt of the temple saw her and approached. Touching the crying woman’s arm gently, the nun ask why she was in tears. Malai explained that as a Christian she couldn’t go inside the temple to assist her elderly mother in worship.

Malai told me that the nun stared for some time at the ground, and then, still touching her arm gently, responded:

“Those who recognize the Holy and are moved to worship it, are never among strangers, no matter what their religion happens to be. And those who are moved by the Holy to be compassionate are already one family. Do not let your heart be so troubled. The goddess of mercy has given you the opportunity to allow someone else to perform an act of compassion towards your mother. Is that not beautiful?”

Malai said the nun’s words gave her great peace. Not long afterwards, her parents passed away, she said, but she has never forgotten this incident. Nor have I forgotten the wisdom of this Buddhist nun. Wherever we approach that which is Holy, we are never among strangers, and whenever we are moved by compassion, we recognize that we are all one family.

*Originally from the Spirituality Column Nov/Dec 2016 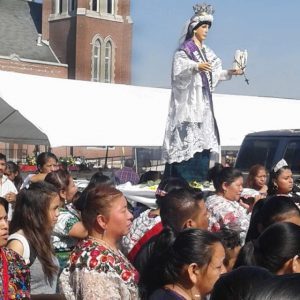