Part of the reality of being in mission in Mwanza, Tanzania, is the need to have a guard outside our home at night. My wife and fellow Maryknoll lay missioner, Ashley, and I have employed the same young man as our night guard for the past one and a half years. His name is Faraja, which means “comfort” in the local Swahili language. Every morning and every evening Faraja and I have the same conversation. I ask him how he is doing or how the night was and he joyfully responds, “God is helping me, Michael. God is with me.” These short exchanges often make me stop and think, “Who is the missioner here?”

Recently, Faraja’s wife gave birth to their second son. Aside from being given a clan or family name, many Tanzanian children also receive a Christian name. Faraja asked me if I would do him the honor of visiting his family and giving their newborn son his Christian name. Inspired by Faraja’s daily greeting, Ashley and I chose Emmanuel, meaning “God with us.”
Michael Leen, MKLM

At one time I believed that one cannot step into the same river twice since water, like time, keeps flowing. I thought that having lived and served in the Guatemalan village of San Andrés Sajcabajá from 1992 to 1998, I could not go back. Yet, while a river keeps flowing, the riverbed remains; time keeps flowing, yet life remains. So here I am, back in San Andrés.

In my first days here I was amazed at the people who recognized me and came up to me on the street. One young mother said she had danced an indigenous dance with other little girls at my farewell party in 1998. Now she has a daughter the same age as she was when I left. Nery, newly elected mayor, came up to welcome me back. He was my Quiché language teacher in 1992. Roberto, the little boy I helped during several years to get rid of a tenacious double ear infection, is now a teacher, eager to continue his studies. I am humbled that so many people remember me as they welcome me back into their river of life.
Bernice Kita, M.M.

A catechist from a remote village in Tanzania where my husband Erik and I served as Maryknoll lay missioners invited us to his home one Sunday. His wife, children and he lived in a simple mud-block two-room house. Having guests was a special honor for them. For the occasion, he borrowed small homemade wooden folding chairs. The children ran in and out of the room as we chatted and at times sat in silence. His wife graciously served us what would be for them a feast, ugali (stiff cornmeal mush) and melted lard in which to dip the ugali. After washing our hands and saying grace, we ate from the common plates. We felt blessed to be so welcomed by this family and enjoyed this special meal where love and mercy abounded.
Margo Cambier, MKLM

I was walking to the store one Saturday morning here in Mombasa, Kenya, where I serve as a Maryknoll lay missioner. I saw Asha on the street corner with her two teenage sons. Asha and her family left Yemen last year because of the war. They live downstairs from me. Since Asha was busily talking on the phone, I just passed by, deciding not to disturb her. A few minutes later I felt an arm around my shoulder. I looked to see Asha smiling broadly. I put my arm around her waist and we continued walking arm in arm and chatting. We must have made quite a picture. She is 40, and was wearing her black hijab (veil and cloak worn by Muslim women). I am 60, and was wearing white pants and a T-shirt with a picture of Archbishop Oscar Romero on the front and one of his quotes in Spanish on the back. Our friendship makes visible the love of the one God we both profess to believe in.
Susan Nagele, MKLM 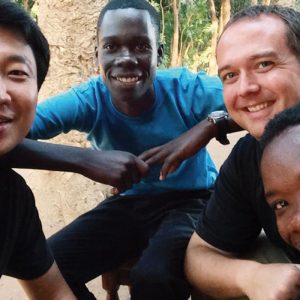 Maryknoll seminarian reflects on his overseas training experiences and mission || Mission is different for every person....