Former FBI agent carries out the mission of Jesus

As an FBI agent for almost 30 years, Jean Gray was committed to the Bureau’s mission of protecting the United States from security threats. In the course of his work, which led him around the globe, he took on another mission, the mission of Jesus to protect the world’s most vulnerable children. That has become the mission dearest to his heart.

Jean, who was born in Excelsior, Minn., a suburb of Minneapolis/St. Paul, joined the FBI in 1955 after earning a bachelor’s degree in political science at the College of St. Thomas (now the University of St. Thomas) in St. Paul and doing a stint in the U.S. Air Force.

His early stateside assignments with the FBI included working in the Washington, D.C., field office during the Eisenhower and Kennedy administrations.
After being sent to the Defense Language Institute, Monterey, Calif., to study Spanish, the young agent was assigned to Mexico in 1965. He lived and worked there for the next six years. “My territory included the whole Yucatán Peninsula,” he says. During one of his “road trips” on the peninsula, he met the late Maryknoll Father Denis O’Brien, pastor of a parish in the Yucatán capital of Mérida, and the seeds of Jean’s mission to children were planted.

“Father Denis was very concerned about the children who had Down syndrome,” says Jean, explaining that mentally challenged children in Mexico were hidden because their parents were ashamed of them. “Father Denis was able to get the use of the local public school every Saturday for these children and their parents. Volunteers would play with the children while psychologists talked to their parents about how to care for them.” Father O’Brien also developed a catechism for mentally challenged children and prepared them for their first Communion. Seeing the priest’s compassion for marginalized children was instant inspiration for Jean and he began offering his moral and then financial support. Father Denis’ project grew into a multi-faceted program known as Pastoral del Amor (Mission of Love), which includes education and medical care for mentally challenged children and is now run by a Portuguese congregation of sisters.

Jean has retired from the FBI, but his zeal for his Christian mission has deepened. He continues to support the work of the Maryknoll Fathers and Brothers, wherever there is greatest need.

He is also devoted to another worldwide mission helping orphans, NPH (Nuestros Pequeños Hermanos, which means Our Little Brothers and Sisters). Founded by a U.S. priest, Father William Wasson, in 1954 in Cuernavaca, Mexico, NPH currently provides homes, meals, education and love for 3,400 impoverished boys and girls in Mexico as well as Bolivia, Dominican Republic, El Salvador, Guatemala, Haiti, Honduras, Nicaragua and Peru. As president of NPH International USA, a non-profit corporation that distributes funds for NPH, Jean works tirelessly to ensure the welfare of the children the organization serves.

Jean says his work and extensive travels dissuaded him from marrying and having his own family. But, he says, “I have all the children in the world needing our help.” We at Maryknoll thank him for keeping God’s children safe and loved.

WONDERFUL ARTICLE ABOUT JEAN GRAY WHOM I FIRST MET IN THE EMBASSY IN MEXICO AS WE WORKED TOGETHER.STRANGE MEETING A FELLOW MINNESOTIAN AT WORK IN MEXICO. I CONVINCED HIM TO ATTEND A BOARD MEETING OF NPH AND HE WAS SOLD ON HELPING THE KIDS.
I REMEMBER ONE FUN TRIP WE MADE TO CUERNAVACO WITH 450 SMALL BOXES OF RAISINS I PICKED UP AT THE COMMISSARY FOR EACH OF THEM DURING LUNCH ONE DAY AND WHAT A TREAT AS THEY HAD NEVER SEEN SUCH A FRUIT BEFORE. JEAN IS THE MOST WONDERFUL CHRISTIAN I HAVE EVER KNOWN. HE CERTAINLY LIVES HIS FAITH. FR.DENIS O’BRIEN WHOM I KNEW WELL TOO IN MEXICO PASSED AWAY AFTER I RETIRED OUT OF THE EMBASSY IN MEXICO.
ANN ARNOLD-95 YEARS OLD NOW LIVING AT THE LITTLE SISTERS OF THE POOR
HOLY FAMILY RESIDENCE
ST PAUL.MN. 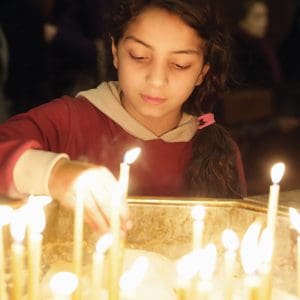 FACING FACTS I was very upset by the letter titled “Disrespectful” in the September/October issue of Maryknoll magazine....