Reaping The Harvest of Immigration


For the children of immigrant families, and especially for those of farm worker families, there are many barriers to higher education. As one of those children, Puja Saha became aware at an early age of the importance of education if she is to have a better future. Today, Puja, 19, is working toward her dream of becoming a pediatrician, thanks to her own perseverance and community support.

The daughter of immigrants from Bangladesh, she is a first-generation college student at the State University of New York at New Paltz. Puja’s father, a farm worker, came from Bangladesh two decades ago to harvest fruit in New York’s apple orchards. When Puja was 7 years old, her father brought Puja and her mother and sisters to the United States.

At first, it was hard to get accustomed to her new life, and she didn’t speak any English, she says. It took time, and the support of friends, teachers and family. Puja especially recalls missing the banyan tree at her family’s village home in Bangladesh.

“I used to sit under the banyan tree in the shade and play with pebbles and leaves,” Puja explains. “I didn’t have toys, and Bangladesh is a very poor country.” Banyan trees do not grow in New York’s colder climate. Instead, a maple tree grows outside her family’s tiny apartment in rural New York. “I had to learn to appreciate the beautiful autumn foliage in the yard of my family’s new home,” she says, recalling the little things that were important to a 7-year-old. Her face lights up as she remembers seeing snow for the first time. “When winter came, I loved the sight of the first snowfall,” she says.

Puja’s interest in medicine began on her visits to the clinic for farm workers that her family went to in rural Ulster County, New York. She was impressed by the dedication of its staff. But it was during a visit one summer to her native Bangladesh that she began to dream of a medical career.

“It was evident that he was losing his sight due to a degenerative disease,” recalls Puja. “They had no access to medical care, and since he was not getting treatment, they knew he would soon be completely blind.” The encounter solidified Puja’s career goal. “I want to help people like Priya and her father,” she says.

Last June, in recognition of her efforts to realize her dream, Puja received a scholarship intended just for the children of farm worker families, which she says will help her make it through her sophomore year at SUNY New Paltz. She became the first recipient of the Brother Daniel Denis Crimmins Memorial Scholarship, awarded by the organization Reaping the Harvest.

Brother Dan also believed that for immigrant families, education was the key. His own parents had immigrated from Ireland, and before moving to Ulster County, Brother Dan worked as a teacher and school principal. When he died in June of 2015, his friends at Reaping the Harvest wanted to continue his legacy.  What better way to keep his memory alive than to start a scholarship for students from farm worker families?Although the monetary amount of the scholarship is small, it helps pay for books and supplies. More importantly, recipients know that there is a community that supports them in their efforts to reach their educational goals.

Puja, accompanied by her mother and her sister, wore her traditional Bangladeshi dress on the day of the scholarship award. In a celebration complete with live music and a banquet of donated food and desserts, she received the grant—and the community’s blessing.

“I will do my best in my studies,” Puja promised. “I want to make Brother Dan, and the community, proud.”

I think Brother Dan would already be proud of her, just as are her family and community.

Deirdre Cornell
Deirdre Cornell is a former Maryknoll lay missioner who served in Mexico. She is author of three Orbis Books, including Jesus Was a Migrant and American Madonna: Crossing Borders with the Virgin Mary.

Mission of Love in Korea 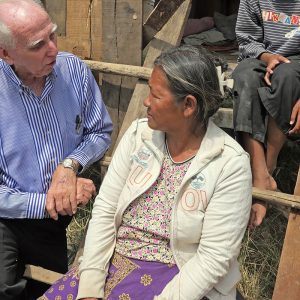 A Maryknoll priest and a lay missioner serve the elderly together in Cambodia || San Sophanna sits on the floor, cross-legged...