Before Christmas when the readings at Mass are from the prophet Isaiah, the Scriptures came to life for me. “The eyes of the blind will be opened,” Isaiah said.

Here in Guatemala, where I serve in mission, Andrea is an old woman whose eyes are so milky white that she can barely see. Since I don’t speak her Quiché language, I asked Miguel, a young teacher, to tell Andrea I would be happy to take her for an eye exam. Andrea accepted and asked if I could also take her husband, 76-year-old Antonio, who couldn’t see at all. After I made two appointments in Santa Cruz, a 90-minute drive away, Andrea said she couldn’t go, so I took Antonio and Miguel, who said he also needed his eyes examined. With Miguel’s help, Antonio hobbled along on a rustic cane.

We went in to the eye doctor, whose name is Luz, which, appropriately, means light in Spanish. Her examination showed Antonio’s cataracts were so old and thick that the right eye was inoperable, but an operation on his left eye would at least enable him to see where he was walking and what he was eating. He was ecstatic to have even that chance for sight. Miguel could only read the first lines of several eye charts. Luz said he had severe astigmatism and needed lenses so strong that she would have to gradually increase the lens power over a period of years.

Later I took Andrea for an exam. Her corneas were so deteriorated that little could be done except to give her eye drops. Yet she was happy for Antonio’s chance for cataract surgery. This year we all hope both Antonio and Miguel will experience Isaiah’s prophecy.
Bernice Kita, M.M.

Joseph, our catechist, his wife Melania and their children welcomed my husband Erik and me into their home in rural Imaleseko in Tanzania. A few days a week, we lived with them as we ministered as Maryknoll lay missioners in the local community. Together we provided catechetical leadership and development training to inhabitants of this distant hamlet and nearby locations. Water was fetched by ox cart and stored in barrels.

It was a difficult life but a good one that we shared together as companions on the journey.
Margo Cambier, MKLM

Early one Saturday morning, a couple of months after I arrived in Otsu parish in Shiga, Japan, a local man came to see me. He was not a member of the parish or even a Christian. Yet he had come to talk with me about his mother’s request to be baptized. She was living in a home for the elderly, her son said, and although she had come to church for many years, she was never baptized. But now she wanted to receive the sacrament. The man said his mother remembered the kindness and all the good work the Maryknoll sisters, fathers and brothers had done in Otsu while she was attending church. Then he added that eventually he and his wife would also like to be baptized.

A week after that conversation, I went with three parishioners to join the woman and her family for the joyful celebration of her baptism.
Roberto Rodriguez, M.M.

A local colleague and I were talking about starting an urban gardening project in Mwanza, Tanzania, where I serve as a Maryknoll lay missioner. The project would provide income for young women who dropped out of school due to pregnancy. When the topic of a site for the project came up, I suggested a plot of land near our home in the poor neighborhood of Mabatini. My colleague considered this for a moment, but then objected, saying, “Michael, you know I used to live in a slum. It’s really tough. There’s a lot of theft and desperation. Mabatini is no different. Any crops we grow there would likely be stolen.” Then he added these encouraging words: “You and your wife are missioners. The fact that you chose to live in Mabatini—a slum—speaks volumes. Your presence alone there is a ministry.”
Michael Leen, MKLM 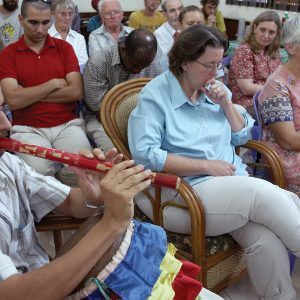 A Maryknoll priest learns about playing a mission song || When people help me find God in my life and when I help people...