Partners In Mission / May 1, 2017
ShareTweet it!LinkedinEmailPrint

Hannah Hochkeppel leaned forward in her chair as three children—Christian, Jewish and Muslim—took the microphone to pray at their friend’s Bat Mitzvah. They began, “May we see the day when war and bloodshed cease, when a great peace will embrace the whole world. Then nation will not threaten nation, and humanity will not again know war. For all who live on earth shall realize we have not come into being to hate or to destroy. We have come into being to praise, to labor and to love.” As they read the prayer for peace from the Jewish tradition, Hochkeppel beamed.

“I very much take to heart the idea that everyone is created with dignity and that God’s love is big enough for everyone,” Hochkeppel says. “Regardless of differences of opinion or faith practice, there is a common thread of humanity that binds us together.”

As program director for the Seattle chapter of the national organization Kids4Peace, Hochkeppel creates safe spaces for youth of different faith backgrounds to encounter each other, dialogue, build community and work together for peace, locally and globally.

Kids4Peace, says its website, is “a grassroots interfaith youth movement dedicated to ending conflict and inspiring hope.” When asked about her favorite aspect of working for that organization, Hochkeppel points to moments like the one that began this article.

Recently, she partnered with Maryknoll’s Seattle office, along with the Missions Office of the Archdiocese of Seattle and the Intercommunity Peace and Justice Center, to organize an interfaith prayer service. The event commemorated the 75th anniversary of Executive Order 9066, which forcibly moved 120,000 people of Japanese ancestry living on the West Coast into internment camps.

During the commemorative event, a Catholic priest, a Jewish rabbi and a Muslim faith leader all explored the teachings of their traditions in response to times of division. All stressed the importance of reflection and drawing strength from their own sacred traditions and also looking outward to be neighbors to others, especially those being persecuted. A sixth-grade Kids4Peace participant led the unity prayer. Hochkeppel and Rabbi Jaclyn Cohen led the congregation in “We Can See That Peace Is Coming,” a song written in Hebrew, Arabic and English.

Hochkeppel believes youth are the key to working for peace. They can walk into a room with few preconceived notions and work together for a common good, she says. Pope Francis has called us to engage in interfaith dialogue to build a peaceful world, and Hochkeppel sees youth leading the way through service projects, writing to elected officials and learning leadership and peacebuilding skills together.

She says working with Kids4Peace has deepened her own life as a Catholic. “Youth ask really challenging questions!” she says. “I have had to wrestle with things that are hard and challenging about my own faith. … This work is consistently pushing me to examine my faith and learn to express it in a way that I would not have been able to do before.”

Describing her mission, Hochkeppel says that as people of faith we are called to be missionary disciples.

“I want us to reclaim religion as a force for good in this world,” she says. “So often it’s seen as a force for division and conflict. My faith heavily influences my desire to do that: to model God’s love and faith in the world in the way that Christ modeled it in the Gospels.” 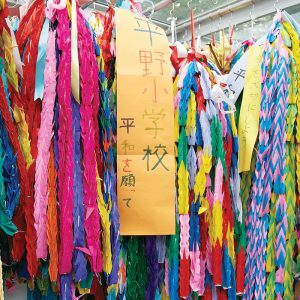 COMMON MISSIONS I am writing to thank you for Maryknoll magazine, which comes to me regularly. The November/December...