After a long meeting on prison reform for women, in downtown São Paulo, Brazil, where I serve as a Maryknoll lay missioner, I decided to walk home instead of facing the crowded, rush-hour subway. As I was passing through a small park, I ran into Grace, a young woman from the Philippines whom I accompanied for many months last year when she was in prison.

Grace had faithfully attended the workshops I gave on health issues. Recognizing me, she gave me a big bear hug and thanked me profusely for visiting her during that very difficult period of her life when she was in prison in a foreign country. She was especially pleased that I remembered her name and gave me a second hug.

One of the hardest things for me about doing prison ministry is that so very often I never find out what happens to the women I’ve grown to know and care about after they get out of prison. Prison ministry is often like planting seeds without ever seeing the fruits. That is what made this chance encounter with Grace even more special. I was so happy to hear she was working two jobs and had a safe place to live.
Kathleen Bond, MKLM

While attending a national inter-religious conference in Kanyakumari in the State of Tamil Nadu at the very southern tip of India, I had the joy of going to visit the Catholic family of a friend from home. Upon my arrival, Mr. Christal met me graciously with his wife and daughters for a delightful overnight stay with them. Early the next morning he told me that one of his teenage daughters had invented something special for my breakfast: large slices of bread, soaked in a thick egg batter and fried. Voila, “John Martin’s South Indian French toast.”
John P. Martin, M.M.

One of my many happy memories of my 12 years as a Maryknoll sister on the island of Yap in Micronesia is the annual celebration of Yap Day. The whole island would come together at the civic center for games, races, contests, music and, of course, food. One Yap Day when the national pride was at fever pitch, the field trip ship appeared on the horizon, returning from its monthly trip to the outer islands to bring medicine and supplies. A message went out from the shore: “Today is Yap Day. Put out your flags.”

With so little time left before docking, the crew ran down, pulled out all the flags and flung them across the ship. Proudly the ship came sailing toward shore, but soon received another message: “Stay out. Don’t come in.”

Surprised and chagrined, the ship’s crew radioed back: “Why can’t we come in?”

The answer from shore went out quickly: “One of your flags says you have cholera aboard!”
Rose Corde McCormick, M.M.

With terrorist attacks directed against foreigners in Bangladesh last year, a number of foreigners left the country. I believe I’m the only native-born U.S. citizen left in the huge area of Mymensingh Catholic Diocese.

At Christmastime I was able to get out to a remote tribal village in the hill country of Bangladesh, which is very close to the border with India. All went well, as more than 300 people received Communion at the Masses and I baptized five children.

But a sign of the times was the presence of five Bangladeshi police guarding the place where I stayed on Christmas Eve. The police were very polite and friendly, and a police sub-inspector came to visit me while I was hearing confessions Christmas Eve. I cannot even express how moved I was when this Muslim policewoman asked me to pray for her family and for all the police present that they would do their work well.
William McIntire, M.M 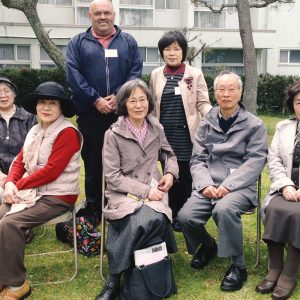