Maryknoll missioners often accompany impoverished and marginalized communities in countries where the rule of law does not exist. At times, people in these communities are imprisoned without trial, are tortured and even “disappeared.” Missioners themselves have suffered imprisonment, interrogation, torture, and at times, even death.

We remember Maryknoll Bishop Francis X. Ford and his secretary Sister Joan Marie Ryan, who, in China in 1951, were bound with ropes, and marched to prison amid insults and physical abuse by the Communist organized demonstrators. After a year of suffering and torture, Bishop Ford died in prison. The news of his death came only with the release of Sister Joan Marie in September 1952.

We remember, too, Maryknoll Sister Mary Brigida Keily who was teaching grade school in the Philippines when the Japanese invaded in 1941. She and Maryknoll Sister M. Trinita Logue were imprisoned. After sleepless nights, persistent interrogation and torture, Sister Brigida, near death, was released to Philippine General Hospital, where she stayed until U.S. forces recaptured Manila in early 1945.

Many more missioners Mary-knollers and others, religious and lay, along with the people they accompany and serve have endured tremendous suffering and terror under torture, and even died, in places where there is no one and no system to protect them.

Some call torture “enhanced interrogation techniques.” Pope Francis has called torture a mortal sin “contrary to human dignity.” In his 2017 World Day of Peace message, the pope challenged us: “I pray that the image and likeness of God in each person will enable us to acknowledge one another as sacred gifts endowed with immense dignity. Especially in situations of conflict, let us respect this, our ‘deepest dignity.’ ”

People across all faith traditions hold the conviction that all individuals are created in the image of God and endowed with basic human dignity. They believe in some variant of “The Golden Rule”: Do not do to others, that which you would not want done to yourself.

In 2014, a 500-page executive summary of the U.S. Senate Intelligence Committee’s report on its multi-year investigation into the CIA’s use of torture details terrible acts of brutality. That these reprehensible acts were done in our name should shock the conscience of every U.S. citizen. The report clearly documents that these techniques often failed to generate intelligence or produced false information.

In 2015, a law authored by Senator John McCain, himself a torture survivor, and Senator Dianne Feinstein was passed by Congress, permanently banning the “enhanced interrogation techniques,” including waterboarding and sexual humiliation, that were part of the CIA’s torture program.

President Trump says he believes “torture works” and has launched a sweeping review of how the United States conducts the war on terror, including possible resumption of banned interrogation methods and reopening CIA-run secret, so-called “black site,” prisons outside the United States.

From experience, Maryknoll missioners cry out: respect the rule of law, respect the dignity of all persons, and do not torture!

Featured Image: Maryknoll Sisters Mary Trinita Logue (left) and Mary Brigida Keily were imprisoned and tortured by Japanese military who invaded the Philippines, where the Sisters were serving, during World War II. Both Sisters were eventually released and rescued when U.S. forces recaptured Manila in 1945. (Photos from Maryknoll Mission Archives)

A refuge for Peacebuilding 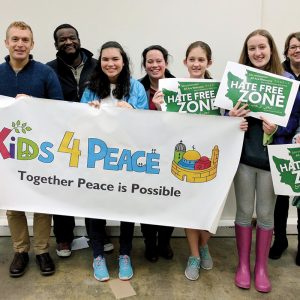 Program director for a grassroots movement brings together youth of different faiths to work to end division || Hannah...

May 1, 2017
Copyright 2020 Maryknoll Fathers and Brothers. All Right Reserved.
Back to top