Marching to martyrdom in Korea

My siblings and I were thrilled recently to hear that a commission of South Korean bishops has begun a process that could make Maryknoll Bishop Patrick James Byrne a candidate for beatification among 213 priests and laity who died for their faith in Korea. Bishop Byrne was our great-uncle. My parents, who are now deceased, often told us Bishop Byrne was a martyr because he gave up his life in compassionate service to God and humanity. I am proud to share the following excerpts of the story I wrote about Bishop Byrne 17 years ago for MARYKNOLL magazine.

When I was 8 years old, we had “show and tell” at school. I held up Ambassador in Chains, a biography of my great-uncle, Bishop Patrick James Byrne, a Maryknoll missioner. It told the story of the bishop’s life and death at the hands of the communist North Korean army.

Thirty years later, working as a newspaper photography editor, I became curious about my great-uncle. On the Internet I found there were men still living who had shared his ordeal. I talked to a veteran’s group called the Tiger Survivors, who relayed stories beyond those I had heard as a girl. I came to understand Bishop Patrick Byrne’s remarkable last days.

Bishop Byrne, who had founded Maryknoll’s first mission in Korea in 1923 and later served in Japan, was appointed apostolic visitor to the new government of South Korea, taking up residence in Seoul in 1947. Two years later, he was consecrated a bishop and named the Vatican’s Apostolic Delegate to Korea. 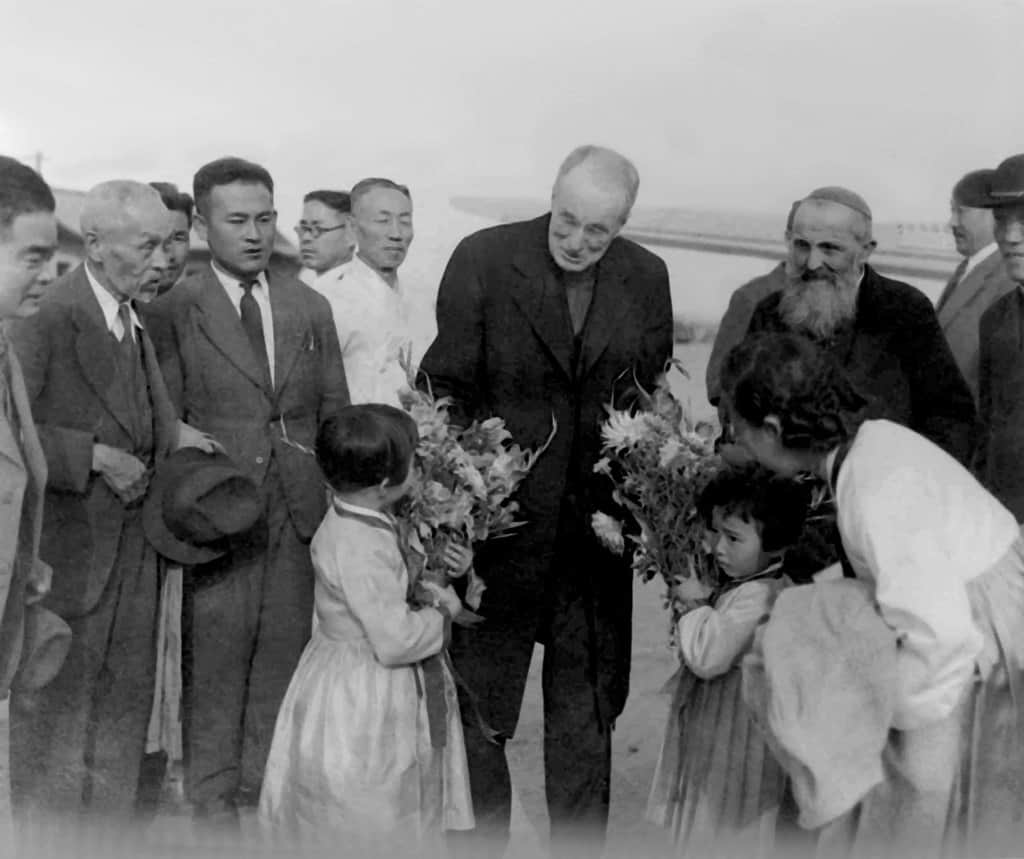 Bishop Byrne gets a warm welcome when he arrives as apostolic visitor to South Korea in 1947.(Maryknoll Mission Archives)

When the North Korean Army crossed the 38th Parallel on June 25, 1950, he had a chance to be evacuated with other Americans but refused. Two weeks after hiding indoors, Bishop Byrne was arrested and taken to a warehouse in Seoul, where other foreigners were being held and South Korean prisoners were being tortured and executed.

The North Korean army put the bishop on trial. The judge declared, “Either Bishop Byrne will broadcast by radio a denunciation of the United States, the United Nations and the Vatican, or he must die.”

Bishop Byrne replied, “There remains only one course: that I die.”

He was transported to Pyongyang on July 19. Reverend Larry Zellers, then a 26-year-old Methodist missionary, remembered, “The bishop was dragged into the room and thrown on the floor. He was half dead.”

On September 5 the prisoners were loaded onto a train and taken north to Manpo, a village on the Yalu River. The civilians were joined by American POWs who would be their companions in captivity.

After six weeks in an old quarantine station, the prisoners met a Korean major they called the Tiger. He told the prisoners they were to march north. Some protested they would die. “Then you shall march till you die,” the Tiger shouted.

The group set out on the last day of October 1950. There were more than 750 American soldiers and 59 civilians, including children. Many had been captured in the summer, and as the weather grew colder, they were not dressed for the climate. Bishop Byrne had been captured in light khakis and a cotton shirt.

The American soldiers went first, followed by Bishop Byrne and Kris Anders Jensen, a Methodist missionary, leading the civilians. The bishop wrapped one end of a rope around his waist; his friend tied himself to the other end. The two men shuffled along the pass in Korea’s Kangnam Mountains, leaning against each other for support. The snow along the trail was smeared with blood from where the bishop’s shoes had worn through.

Many soldiers collapsed. As he walked by the men at the side of the trail, the bishop repeated the Our Father and blessed them.

The Tiger was incensed at the casualties. He called some of the American officers over and shot a lieutenant whose group had the most soldiers fall out. As the march resumed, American soldiers continued to falter, and the others would hear gunshots after the column passed by.

The prisoners would walk for an hour or two along the steep mountain trail, then rest for 10 minutes. The bishop spent the rest periods in prayer; soldiers started slipping back to kneel with him. At the end of the third day, Bishop Byrne sent word to the soldiers that he would give them general absolution. They congregated on the side of the hill, and the bishop knelt down with them. When he was finished, Reverend Zellers had to help him get up.

The bishop was described by another civilian prisoner, Father Philip Crosbie, in his book March Till They Die.

“Bishop Byrne never claimed his fair share of anything, except of work; and of that he always claimed more than his due,” wrote Father Crosbie.

“Bishop Byrne was a holy man,” remembered Reverend Zellers. “He would walk among the group, and all eyes would be on him. He was so friendly, but also scholarly. The more you got to know him, the more you realized he was a person of deep feeling.” 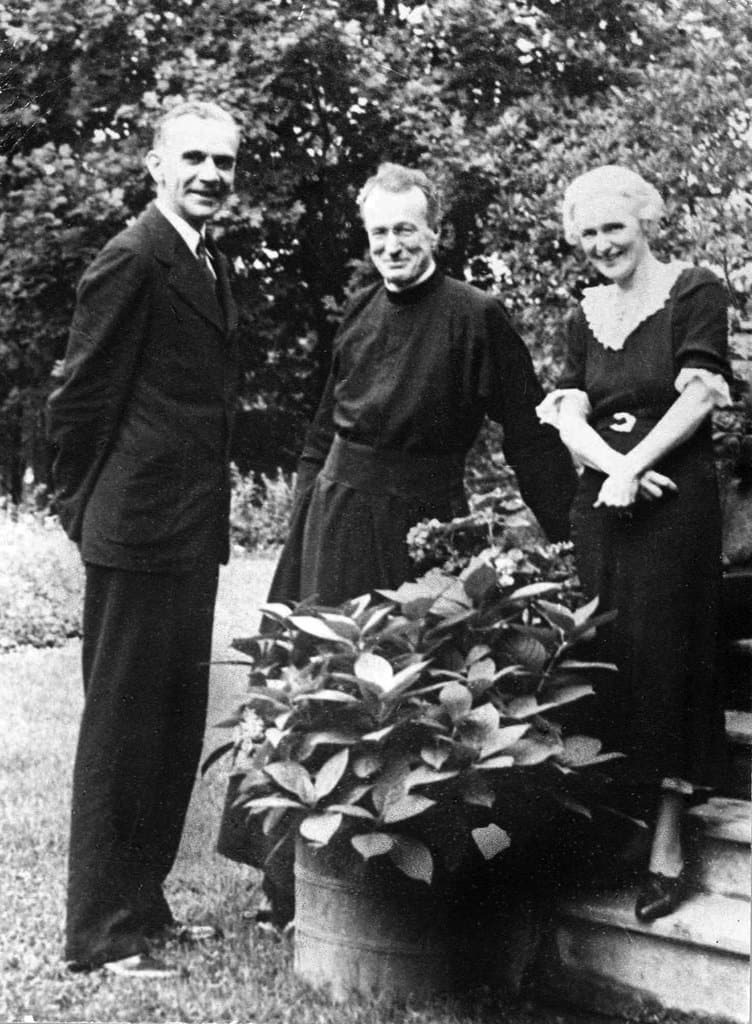 On November 8, the march came to an end. During the 110-mile trek, 98 soldiers and two civilians died. For the survivors, the next stage of the ordeal began.

The prisoners ended up in a North Korean town called Hanjang-ni, where the Tiger forced them to perform calisthenics in subzero temperatures. Bishop Byrne was showing signs of pneumonia. The other civilians reluctantly took him to the “People’s Hospital.” It had no heat and no medicine. The walls were caked with ice. The civilians called it the Morgue. Reverend Zellers said, “Nobody who went to that so-called hospital ever came out alive.”

Featured Image: Bishop Patrick Byrne served as apostolic delegate to South Korea from 1949 until his death in 1950.(Maryknoll Mission Archives)

Responding to Hunger in Africa 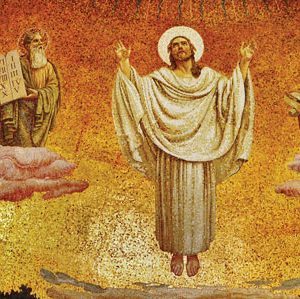 Transforming Faith || While Maryknoll missioners’ experiences overseas vary as much as the countries and cultures...