" /> Working for a world free of nuclear weapons | Maryknoll Magazine

A world free of nukes

100-plus countries push for a world free of nuclear weapons

Should we still strive for a world free of nuclear weapons in light of our current concerns about global security? Absolutely.

More than 100 countries have been meeting regularly at the United Nations throughout 2017 to negotiate “a legally binding instrument to prohibit nuclear weapons, leading towards their total elimination.” This new international agreement would place nuclear weapons on the same legal footing as other weapons of mass destruction, such as poisonous gas, which have long been outlawed.

“The fact that 132 countries came together, found common ground, and set the groundwork toward a treaty makes this a very successful beginning,” Marie Dennis, co-president of Pax Christi International, told the National Catholic Reporter after the start of meetings in March.

“How sustainable is a stability based on fear, when it actually increases fear and undermines relationships of trust between peoples?” Pope Francis asked in a letter sent to the first of the meetings in March.

U.N. Resolution L41, which calls for negotiations toward a new ban on nuclear weapons, was adopted by a wide majority at the General Assembly last December (123 for, 38 against, 16 abstentions). A core group of six nations—Austria, Brazil, Ireland, Mexico, Nigeria and South Africa—submitted the landmark resolution in recognition that the Nuclear Non-Proliferation Treaty signed in 1968 has failed to provide a path to abolition. Multilateral negotiations for nuclear disarmament have been at a standstill for two decades.

The five nuclear-armed nations in the non-proliferation treaty (the United States, Russia, United Kingdom, France and China) remain committed to the indefinite possession of nuclear weapons. Meanwhile, U.S. spending on nuclear weapons is at an all-time high, and includes a 30-year program to “modernize” the U.S. nuclear arsenal and production facilities.

According to the International Campaign to Abolish Nuclear Weapons, nine countries together possess around 15,000 nuclear weapons, with the United States and Russia maintaining roughly 1,800 nuclear weapons on high-alert ready to be launched within minutes of a warning. Most are so many times more powerful than the atomic bombs dropped on Japan that a single nuclear warhead could kill millions of people if detonated on a large city.

Pope Francis has called for a new worldwide dialogue at the U.N. “to ensure that nuclear weapons are banned once and for all to the benefit of our common home.”

Faith in action:
• Read the personal stories of the hibakusha, the Japanese word for the
survivors of the atomic bombings at Hiroshima and Nagasaki on Aug. 6 and 9, 1945.
• Learn more about “Why a ban?” on the website of the InternationalCampaign to Abolish Nuclear Weapons. http://www.icanw.org/why-aban/.
• Send Nuclear Disarmament: Time for Abolition” to your elected officials. Urge your elected officials to support the negotiations on a treaty banning
nuclear weapons.

Come to East Africa and see 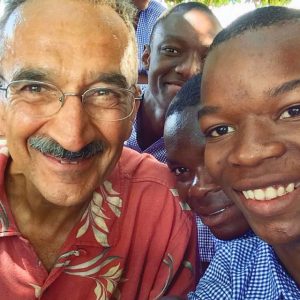 Come to East Africa and see

On a journey to East Africa a New York deacon gets gifts for ministry || A statement on the Maryknoll Society website...