In the Salvadoran town of Las Delicias, where I serve as a Maryknoll lay missioner on the outskirts of San Salvador, the capital, it is common to see police or military patrols walking the dirt roads with their weapons in hand “looking for gang members.”

Here, as in many poor communities in El Salvador, gangs are rampant. Young people, who have small chance of finishing high school and few employment opportunities, can easily be lured into the gangs. But now the youth of Las Delicias have an alternative to gang membership. It is a sports program, appropriately called “Playing for Peace.”

In 2009, with the support of the Maryknoll Lay Missioners (MKLM) and the Foundation for Development and Solidarity Castulo Antonio (FUDESCA), a nonprofit organization in the community, I helped analyze the reality of youth in the area, most of whom live in tiny houses with dirt floors and tin roofs. Discovering that a normal supper for a 5-year-old consisted of a piece of bread and coffee, I worked with the local community to address the children’s nutritional needs by opening a soup kitchen where the mothers of the children took turns cooking nutritious food.

Seeing how the adults came together to help their children, I enlisted their help in starting a development program for youth as an alternative to the violence around them and a way to promote peace through sports. Thus was born Playing for Peace. 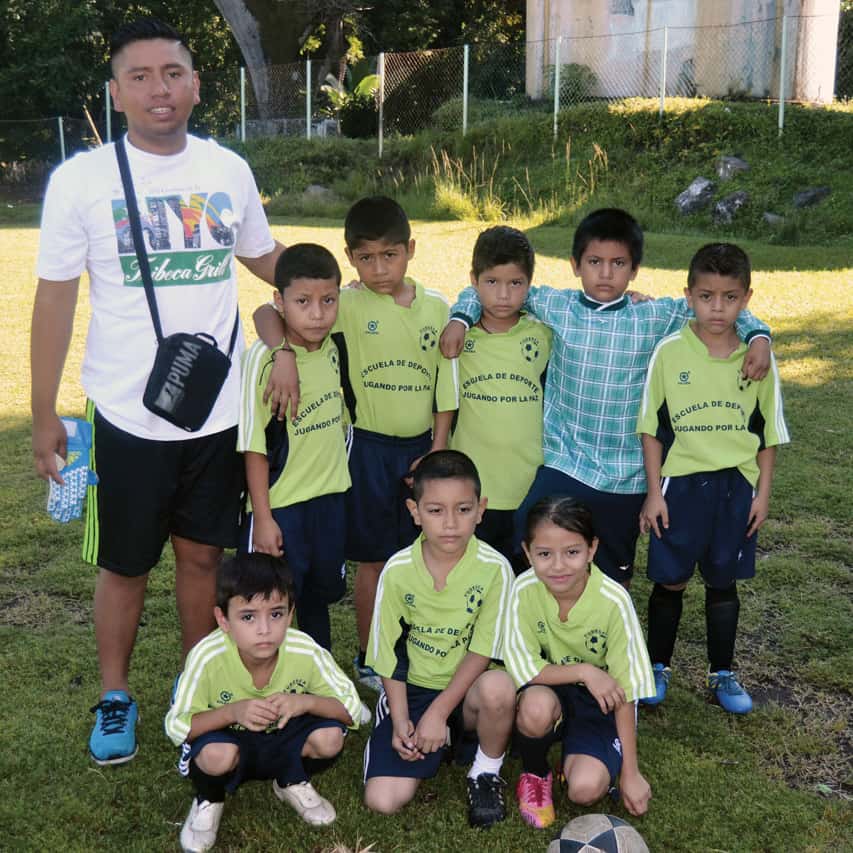 Youth in the community of Las Delicias, El Salvador with coach Juan Moreno, have the chance to play soccer and avoid being recruited by gangs. (L. Parr/El Salvador)

Five young adults from the community with a passion for soccer supported our vision and learned to be soccer coaches in Las Delicias, which is too remote for youth to have access to sports programs in bigger cities.

Our coaches are the heart of the program, who not only teach the children to play soccer but strive to be role models for them. Every weekend they conduct practices, attended by 30 to 50 youth ranging from 6 to 21 years of age. As our program has grown, we have added activities such as basketball and break dancing to our original offering of soccer.

In Playing for Peace, our youth not only find a safe place to play sports but in each practice we pray and reflect on God and our call to improve our community. Our motto is “God, Academics, Sports” because we believe that focusing on these three elements can help young people change their negative views and work to build a new culture of solidarity and love for others. They learn teamwork, friendship, creativity, discipline, the importance of education and respect and how to achieve their goals.

Many young people do not go to high school because they cannot afford money for the bus to get there. To help alleviate financial burdens, we offer eight scholarships a year for high school or college students who participate in our programs. The scholarship is worth $30 a month, which we fund through MKLM donations. The scholarship recipients give back by volunteering in our programs or in the community library. We have monthly meetings for them, where we reflect on the Bible and how we can work to build a Las Delicias with less violence and more love. 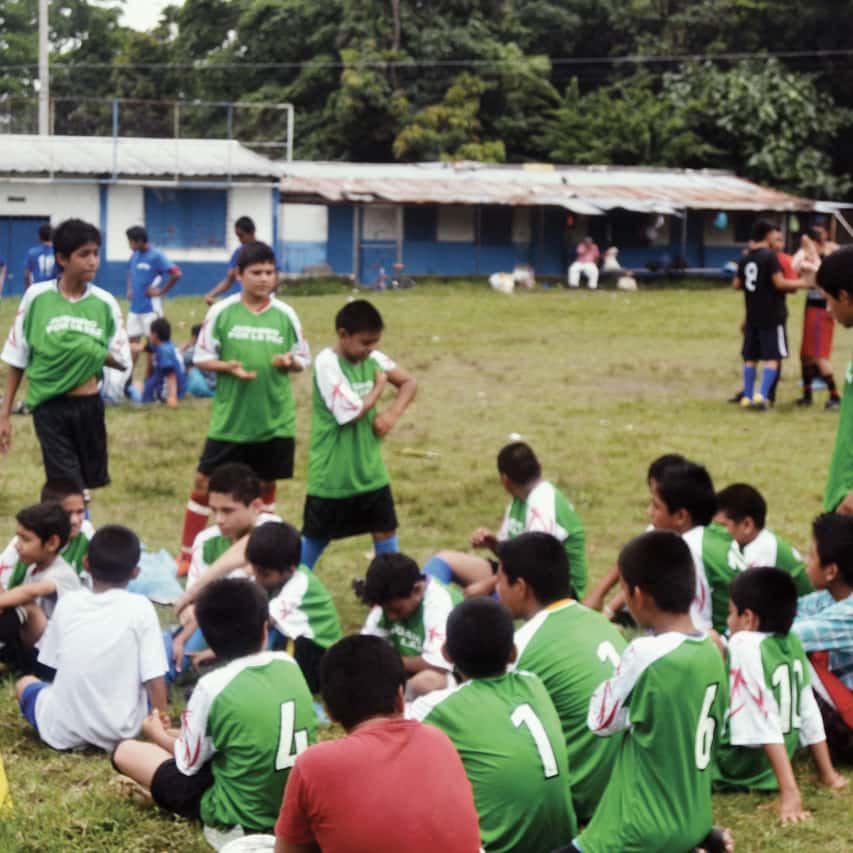 A youth soccer team that is part of “Playing for Peace” provides young people in El Salvador with a competitive activity and help them engage with the community rather than join a gang. (L. Parr/El Salvador)

A year ago at Christmastime, all the scholarship recipients helped repair the roof of the house of one of the poorest families in the town. The youth were very happy to help their community, and for me being with the young people helping their neighbors proved to be the best Christmas I have ever had.

We take pride in success stories like that of Juan Moreno, who began attending the soccer program when he was 12 years old. He is one of six brothers who lives with his single mother, a domestic employee. Juan, now 21, is in his third year of college, where he is studying to be a physical education teacher. He is a leader in our program and is working to give to others the same opportunities he has had.

“I like that we promote values through soccer, to instill in the heart of each child the construction of peace,” says Juan. 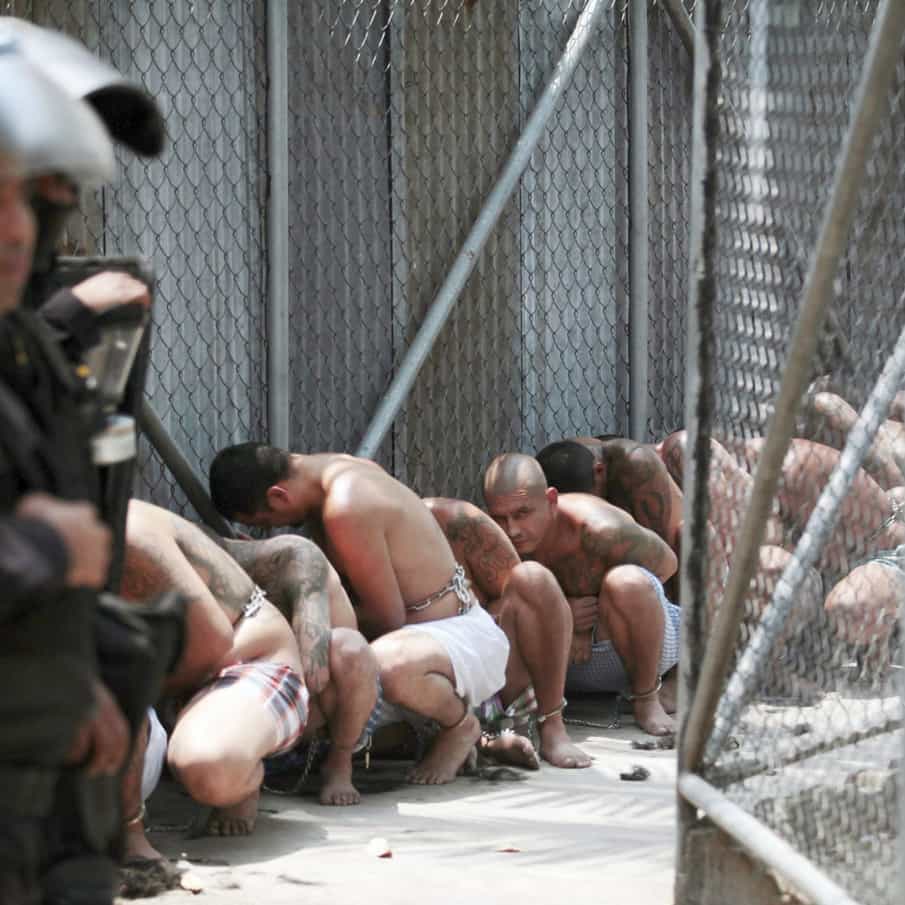 Children in the El Salvadoran community of Las Delicias have the opportunity to participate in a program called “Playing for Peace,” that seeks to keep them from joining violent gangs and ending up arrested such as these men. (CNS/J. Cabezas, Reuters/ El Salvador)

Another scholarship recipient is César Hernández. He lives with his family on a coffee plantation and walks an hour, through the coffee fields, to get to the bus to go to school. Last year César graduated from high school and is now studying mechanical engineering at the José Simeón Cañas Central American University in San Salvador (also known as UCA El Salvador, where six Jesuits were killed in 1989). César, whose passion is break dancing, introduced it into our program as a way to promote peace.

César believes that if people could release their energy competing in dance battles instead of in physical battles in the streets, there would be less violence in Las Delicias. “If we try, we can change this reality, starting in our own communities and neighborhoods,” he says.

Then, reflecting on his own participation in our program, he adds, “Playing for Peace has changed my future because it helps me to share with others what I have learned and, thanks to the program, I have achieved my high school diploma.”

The reality of young people in El Salvador can be very harsh, but I have learned that promoting a culture of peace is possible with faith in God and the support of the community.

Larry Parr
Larry Parr from Baltimore, Md., has served as a Maryknoll lay missioner in El Salvador since 2008.

Unchained at Last in Cambodia

Awesome job Larry. From firsthand experience we know how hard these kids have it. Keep doing the wonderful job you’re doing,God’s work. We’re praying for you and the kids and supporting as we can financially. Peace! 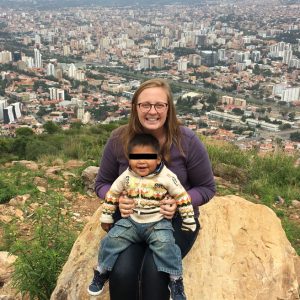