Our new mission in the southeast corner of South Sudan had just started a school where there had never been one for over 100 miles. The idea of going to school for little children who were accustomed to running wild and free, chasing the sheep and goats, was entirely foreign. However, when they heard that if they went to this “new thing the missioners had started,” they’d get three meals a day, they got interested. Every morning I delighted to see the little kindergartners racing down the road clutching their plastic plates. They couldn’t wait to get to school!
Mary Ellen Manz, M.M.

I had joined a weeklong visit to São Paulo prisons with Brazilian seminarians. As I entered the first men’s prison, my senses were overwhelmed. There were old cinderblock walls with laundry hanging from makeshift clothes lines strung for 20 to 30 yards, overcrowded cells, the smell of cheap tobacco burning from cigarettes rolled in notebook paper, and the sounds of hundreds of men talking and yelling. However, once I got past the shock to my senses, I noticed the most important part: the hospitality and warmth of the prisoners as we walked through the cellblocks.

We went to six cellblocks, spending about an hour in each. The seminarians would lead a simple liturgical celebration with a short reflection and end with singing. I could feel how much the men enjoyed our presence.
I was definitely a rookie in many ways, not the least being my poor command of the Portuguese language. As we left each cellblock, the prisoners would extend their hands and say, “Vá com Deus!” Not really understanding the phrase, I started to echo, “Vá com Deus” to the prisoners. My comfort level was growing.

Of course, like all rookies, you can quickly get ahead of your abilities without knowing it. A seminarian stepped in and explained that “Vá com Deus” means “Go with God” and is normally said to the person leaving. While it was appropriate for the prisoners to say “Vá com Deus” to us, we could not say it to them because they were not leaving. It was more appropriate for us to reply, “Fique com Deus” or “Stay with God.”

As I stood there feeling low and wondering how many men I had offended, the seminarian patted me on the back and said with a smile, “Welcome to prison ministry.”

Those two phrases and the lesson from the seminarian have stood out for me ever since. Vá com Deus or Fique com Deus, whatever your situation is.
Jim Kott, MKLM

Here in Jilin City, China, where Maryknoll Father Shaun Crumb and I serve, we went to lunch at a small restaurant. Not wanting to draw attention to ourselves, we looked at each other, made a signal and bowed our heads to say grace before the meal. After we finished praying, the owner of the place came to our table and asked, “Are you one of them?” Then she showed us her cross and said, “I am also one of them.” It felt good to meet a fellow Christian in this predominantly Buddhist land where Christians are a small minority.
Rodrigo Ulloa, M.M.

As a Maryknoll lay missioner working at our offices in New York, I go each week to the local prison to do a Bible study in Spanish with the Hispanic prisoners. We end each session with the Lord’s Prayer and Hail Mary. When I first began meeting with them, the guys would rapidly say the Our Father, finishing before I had hardly begun. Since Spanish is not my first language, I asked them to please slow down. The other evening, after I had been with them for about five years, one of the prisoners remarked that they and I were now in sync saying the Lord’s Prayer. I don’t know if I am able to say it faster or if they are saying it slower. Perhaps it is a combination of both as we have become more accustomed to each other.
Deborah Northern, MKLM 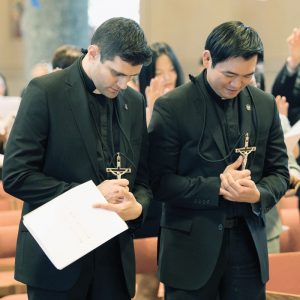 Maryknoll Society is doubly blessed to ordain two new priests who would go to mission in Hong Kong || When Daniel Siwoo...

Sep 1, 2017
Copyright 2019 Maryknoll Fathers and Brothers. All Right Reserved.
Back to top