HIV Ministry is Making a world of difference in Peru

Missioner reflects on changes to his HIV ministry in Peru

As soon as Maryknoll Father Joseph Fedora arrives at the Posadita del Buen Pastor (Little Inn of the Good Shepherd), he asks about “his children,” boys and girls who grew up in the shelter for HIV patients in Lima, Peru. Since 1998, he has been the shelter’s spiritual adviser and a father figure for its children.

Good Shepherd Sister Elsa Calero Lopez, the shelter’s director, explains that at first the Posadita’s mission was to care for mothers in the terminal stages of AIDS and to try to give their HIV-positive children a happy childhood.

That changed when Peru received free access to antiretroviral drugs (ARVs) in the early 2000s. It made a world of difference.

“There was no longer a question of when they would die but what kind of a life we could give them,” says Father Fedora. Most of “his children” are now young adults who are reintegrated into society and are leading normal and healthy lives, while continuing to take their medication. They also ask about “Padre José” when they go back to visit the Posadita. 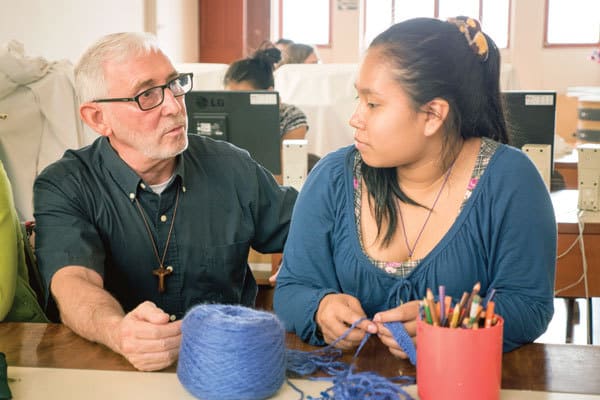 Father Fedora talks with a resident at the Posadita del Buen Pastor, a shelter
started for women with HIV/AIDS that now also houses other vulnerable women.

Talking to the teenagers currently living at the shelter, Father Fedora recalls how different things were when he started his HIV ministry 19 years ago. “This disease was not just a medical diagnosis; there was a lot of moral judgment attached to it,” he says. “People with HIV were abandoned by everyone.”

“With education, there is a diminishment of fear and where there is less fear, there is more acceptance,” he adds. “There is still discrimination … but far less.”

Early in his ministry, he wrote in a notebook he calls his “litany of saints” the names of friends he lost to AIDS, so he could remember them in prayer.

They were people like Ricardo, 26. In his final days at the hospital, Ricardo suffered from a disfiguring cancer and fever that left him spent and with parched lips. When his sister offered him a soda, he whispered, “Father first.”

“This concern for the other, even as they lay dying, moves me deeply,” Father Fedora says. “If there are tears, they are tears of appreciation for the generosity of people like Ricardo.”

Father Fedora’s “litany of saints” has 402 names. More than half of those people died during the first four years of his ministry, before ARVs. “It goes to show the radical difference ARVs make,” he says. “With this medicine, the (effect of the) virus is not only stopped, but it can revert the damage (to the immune system) caused by the virus.”

ARV therapy during pregnancy and delivery has dramatically decreased the number of babies born with HIV. Currently, the Posadita cares for an average of 25 girls and women, some HIV-positive, but also HIV-free teenagers who are survivors of domestic violence and human trafficking.

“When I came to this place, they received me with open arms,” says Rocío, 16, emotionally scarred by traffickers but now free. The Good Shepherd Sisters work with the Peruvian government to protect vulnerable women. “I’m very thankful for them. They are kind and help us in any way they can.”

Sister Elsa also thanks Father Fedora for his constant support and presence. “We consider him part of the family,” she says.

Father Fedora, who grew up in California, started his mission in southern Peru after his ordination in 1984. But when he became a chaplain for AIDS Project Los Angeles while working as a Maryknoll mission promoter in the early 1990s, he realized the need to minister to HIV patients. When he returned to Peru in 1998, after working for MARYKNOLL magazine, he was ready to minister to people with HIV/AIDS in the city of Lima.

“The last 19 years have been the happiest of my priesthood because the people invite me to be part of their lives and share the weight of their cross,” says the 64-year-old priest, who now balances his responsibilities as the Maryknoll Society’s regional superior of Latin America with his HIV ministry. His pastoral work continues in hospitals, support groups and shelters, as well as prisons, where money from Maryknoll donors helps provide medicines and food for inmates with HIV.

Besides the Posadita, he brings the support of Maryknoll to Hogar de Vida (Home of Life), a shelter that houses four women with HIV and 12 children, providing them with food and clothing, as well as continuous medical, psychological and emotional support. 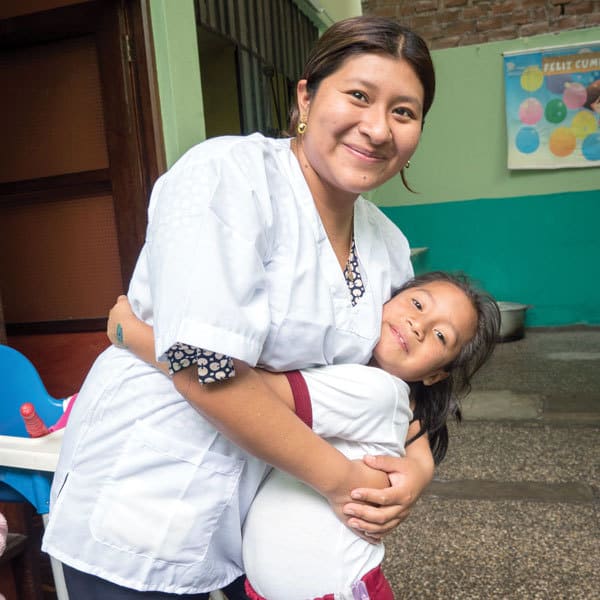 A nurse technician (photo left) gets a hug from a young resident at Hogar de Vida shelter.

“I don’t know what would’ve become of me and my children if we did not come here,” says Roxana, who lives in the shelter with her 5-year-old son and 8-month-old daughter. Like other mothers at the shelter, she says she did not have the resources to care for her family on her own. “I have to thank God because now I have a roof and food.”

Although having HIV in Peru is not the death sentence it used to be—UNAIDS reported that Peru reduced its AIDS-related mortality by 40 percent between 2010 and 2016—there is still a lot of work to be done. According to the Peruvian Health Ministry, 72,000 people live with the HIV virus, but only 60 percent are aware they have it. Even though most who are diagnosed with HIV receive free antiretroviral treatment, many end up abandoning it for a variety of reasons.

Another Maryknoll-supported program, the San Camilo Home Visitation Program, addresses these concerns by providing HIV patients and their families with psychological, nutritional and spiritual support.

“A team of pastoral agents, counselors, doctors and nurses visits homebound patients,” says Father Fedora. “These are people living in extreme poverty and this is one of the most effective programs to serve the vulnerable.”

Counselors provide a lifeline for the patients.

“Thanks to them, I have learned to accept my illness,” says Lucinda, a mother of four whose husband is also HIV-positive. Choking up, she shares that recent family problems reminded her of her painful childhood.

She says she felt like giving up, but calmed down remembering the counselor’s advice to think of the positive moments in her life to break her “chain of pain.”

“I trust them,” she says of the visitation team. 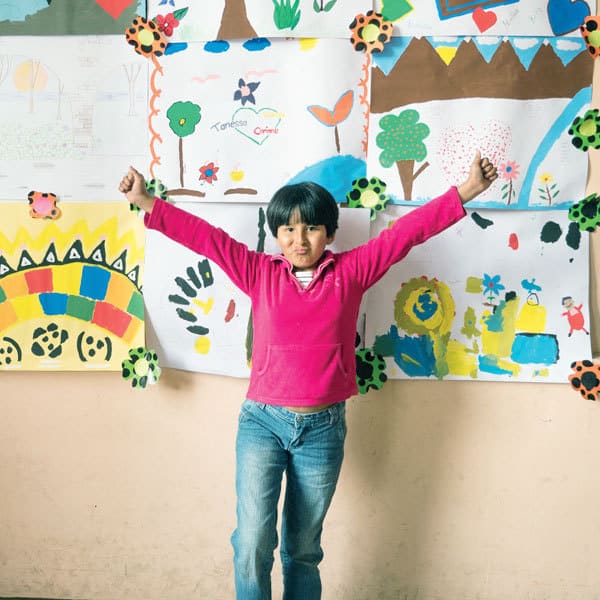 A child at the Posadita proudly shows off residents’ artwork.

On World AIDS Day, December 1, Father Fedora will continue to pray for the 25 million people taken by this epidemic in the last three decades, including the 402 saints he has known.

He will also join others in raising awareness about prevention and detection, celebrating the victory of access to treatment, fighting against the spread of HIV and standing in solidarity with the millions of HIV-positive people of the world.

(The names of the program’s participants have been changed to protect their identities.)

Son, pray for me 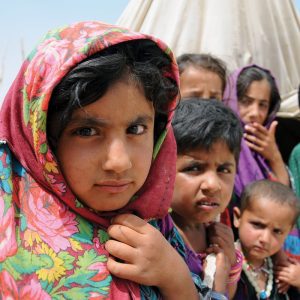