Glimmer of Hope in El Paso

Maryknoll sister welcomes migrants
at a shelter on the U.S./Mexico border

Karla La Torre, 29, fled her native Honduras with her four children and $50 her grandmother gave her to come to the United States. With tears in her eyes, she recalls the day when members of the notorious gang known as the 18th Street Gang killed her husband, brother and father because they couldn’t give the gang any more money. La Torre’s family had a little bodega in her hometown and she says gang members extorted money from them for several years. Desperate to protect her children, La Torre began an uncertain journey.

She and her two girls and two boys, all under 12 years of age, took a bus from Honduras to Guatemala and then to Mexico. This past July, after a year’s journey, the family finally made it to the U.S./Mexico border.

“I didn’t have any more options; I had to leave my country for my kids’ safety. If I stayed there, I knew I would die and my kids would be recruited by the gangs,” says La Torre. “I risked our lives crossing the border, but I hope to start a new life here.”

At the border, La Torre and her children were processed at the U.S. Immigration checkpoint. Then U.S. Immigration and Customs Enforcement (ICE) dropped them off, only 10 blocks from the border, at Annunciation House in El Paso, Texas, where they finally saw a glimmer of hope. They were welcomed with a warm meal, clothes, a place to sleep and someone to talk to them in their native language. 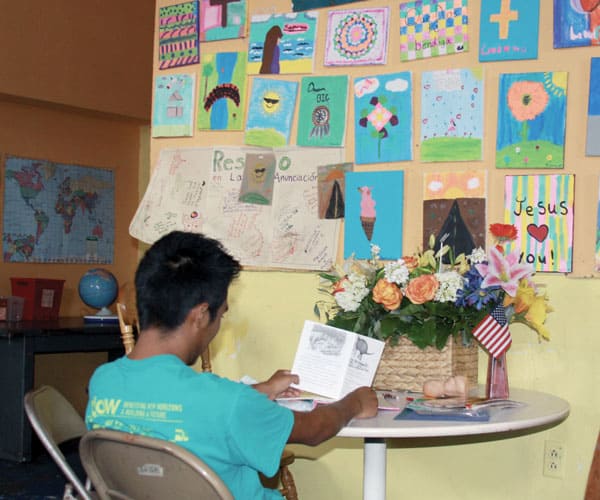 A boy reads a welcome greeting card the day he arrives at Annunciation House, a migrant shelter in El Paso. (G. Soria/U.S.)

Annunciation House is a shelter for migrants, most of whom are undocumented immigrants. It has been offering hospitality since it was founded 40 years ago by a group of religious leaders. The house and two other shelters are supported by donations and the help of volunteers like Maryknoll Sister Lelia Mattingly, who has been serving at the shelters several days a week for the past two years.

Every day, ICE drops off migrants, most of them from Central American countries.

The three-story shelter can hold about 100 guests. In a chapel decorated with religious icons on the second floor, volunteers and guests start their day with prayer and reflection. Newcomers receive orientation and volunteers help them connect with family members in the States. Most guests stay at the shelter for only a few days, but those who have no other place to go can stay up to six months.

Sister Mattingly talks to them, offers comfort and sometimes brings them to the bus station or airport to join their family. “Most of the immigrants are very religious and their faith is so great. I share only my company and tell them that God loves them and they will be fine,” she says. “I can only offer them my prayers and they are thankful for this.” 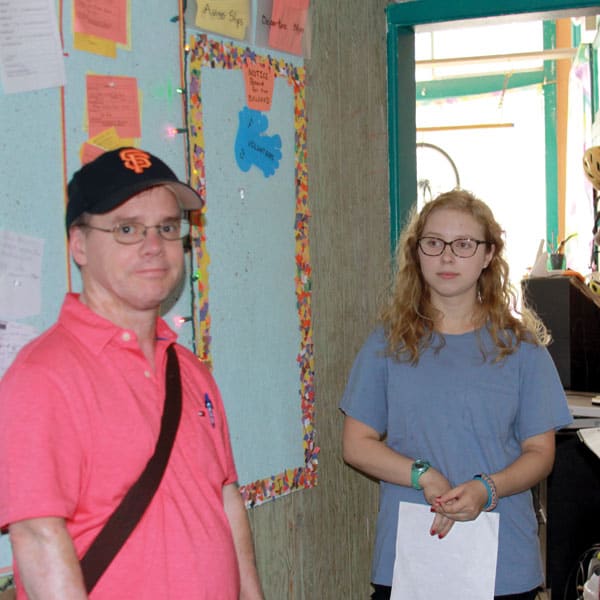 Nancy Dordio gives a tour of Annunciation House to Matt Gray, who participated in a mission immersion trip conducted by the Columban Fathers that Maryknoll participated in at the border with Mexico. (G. Soria/U.S.)

Sister Mattingly, 76, who was born in Hawesville, Ky., has been serving those in need for more than 50 years. She entered the Maryknoll Sisters in 1960 and studied to be a nurse. Her first mission assignment was to Bolivia in 1971. There she worked initially with small communities living along a river in the jungle and later in the highlands with indigenous people. She also served in Nicaragua.

In 1997, while in the States taking care of her mother, Sister Mattingly began working with immigrants in rural Kentucky who had come from Mexico and Guatemala to work on Kentucky’s tobacco farms. They earned sometimes $100 a day. “For them it was like a gold mine, because they were making only a few dollars in their poor countries,” Sister Mattingly says. “The factories found out that they were hardworking people and they wanted more to come to work.” Having the opportunity to get to know these people who, she says, were arriving with a loving heart and only the shirts on their backs was a wonderful experience. “At that time there was no antagonism and prejudice that I feel now,” she says. “Mostly everyone respected them because they worked so hard and built community.” 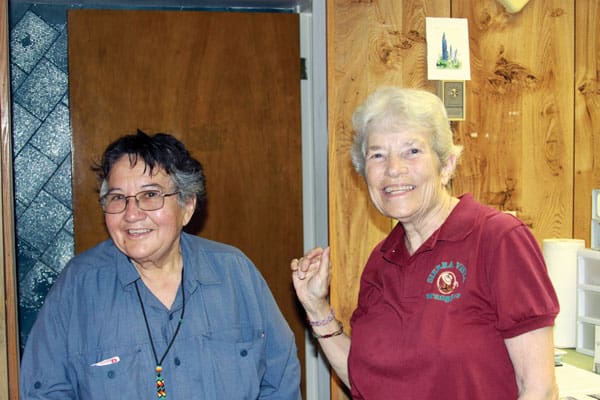 Now in El Paso, Sister Mattingly says she has seen immigrants coming to the United States out of fear. She strongly believes that migration is a consequence of problems such as violence and poverty in their homelands and we have to address those root causes. She hopes more people will realize how important it is to relate to one another as a community and love one another. “That is what Jesus is trying to teach us,” she says.

“I believe people should be treated just as humans,” says Dordio. “I did not know anything about immigration before I came here. I encourage friends and family to come and see what we do, meet the people we are helping, build a relationship with them and put a face on the issue of immigration.”

For Sister Mattingly, faces like those of Karla La Torre and her children inspire her to continue her ministry to refugees and immigrants in El Paso. “I am happy to be able to get to know God better through other people,” she says. “For me it has been a gift.” 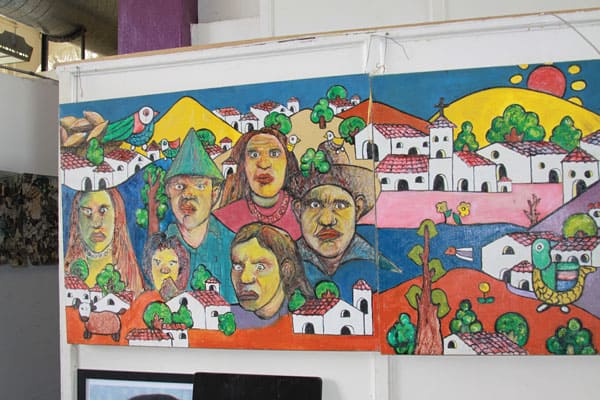 A mural in the colorful style of Mexican folk art greets visitors and guests on the first floor
of Annunciation House shelter in the border city of El Paso, Texas. (G. Soria/U.S.)

Featured Image: A girl looks at candles placed on the United States side of the U.S./Mexico border fence during 2016 interfaith protest against what activists say is an increasing militarization of the border. (CNS/J. West/U.S.)

'Finding God in all things' 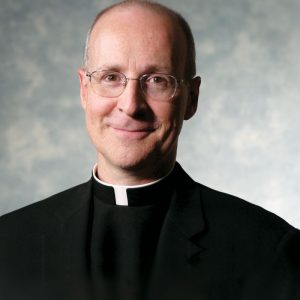 'Finding God in all things'