More than 70 years have passed since atomic bombs were dropped on the Japanese cities of Hiroshima and Nagasaki, but finally, last September, an overwhelming majority of the world’s nations voted to adopt a nuclear ban treaty. Behind this Herculean effort was the International Campaign to Abolish Nuclear Weapons (ICAN), a small non-governmental organization based in Geneva, Switzerland. ICAN coordinated with hundreds of other NGOs, including Pax Christi International, in more than 100 countries to guide discussion and build global support for the ban.

ICAN has broken the deadlock surrounding nuclear weapons by reframing the issue as a humanitarian concern rather than a national security one. The Nobel Committee recognized the importance and success of this grassroots effort and awarded ICAN the Nobel Peace Prize for 2017.

The landmark international agreement—officially called the Treaty on the Prohibition of Nuclear Weapons—bans all nuclear weapons as weapons of mass destruction, establishes a pathway to their elimination, and sets obligations to assist victims and remediate the environment harmed by the use or testing of the weapons.

“We are putting nuclear weapons in the same category as other unacceptable weapons,” said ICAN’s executive director, Beatrice Fihn. “Like the conventions prohibiting chemical and biological weapons, landmines and cluster munitions, this treaty bans an entire category of weapons. It strengthens the norm that weapons that cause unacceptable harm for civilians cannot remain legal—and that nuclear weapons are no longer an exception to these norms.”

More than 50 countries have signed the treaty but only a few have gone on to ratify it. The treaty will enter into force 90 days after at least 50 countries both sign and ratify it.

The challenge now is to bring the nine nuclear-armed nations into the dialogue. Those nations—China, France, India, Israel, North Korea, Pakistan, Russia, the United Kingdom and the United States—boycotted the negotiations leading up to the treaty and indicated they do not plan to sign it.

The Holy See, represented by Archbishop Paul Gallagher, the Vatican’s foreign minister, was the first member state to sign the treaty. “Nuclear arms offer a false sense of security,” the archbishop said. “Peace and international stability cannot be founded on mutually assured destruction or on the threat of annihilation.”

ICAN’s Nobel Peace Prize will hopefully encourage more people to support the ban on nuclear weapons and heed the message of Archbishop Gallagher: “All the diplomatic and political means of mediation should be engaged to avoid the unspeakable.

Faith in action:
•Learn more about “Why a ban?” on the website of the International Campaign to Abolish Nuclear Weapons. www.icanw.org/why-a-ban/
• Watch and share a two-minute video by ICAN explaining the nuclear ban treaty. http://bit.ly/2xO7hIi.
• Organize an interfaith prayer service for a ban on nuclear weapons Use this text written by Pax Christi International for an interfaith prayer service at the Isaiah Wall at the United Nations in New York City. http://bit.ly/NuclearbanPrayer.
• Email your country’s foreign minister to say you want your country to sign the treaty. http://nuclearban.org/#write-to-your-fm. 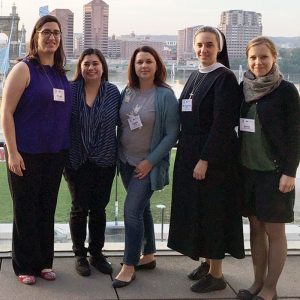 Jan 1, 2018
Copyright 2020 Maryknoll Fathers and Brothers. All Right Reserved.
Back to top