The pope says that to find peace, migrants and refugees “risk their lives” on long and dangerous trips

No one knew what to expect when Cardinal Jorge Mario Bergoglio of Argentina announced five years ago that he would take the papal name Francis. Saint Francis of Assisi, preacher of brotherly love and peace and best known for his love of nature and animals, is often quoted as having said, “Preach the Gospel at all times. When necessary, use words.”

True to his name, Pope Francis has been known to use his actions to preach the Gospel. Possibly his best known act has been washing the feet of those typically considered outcasts as part of the Holy Thursday ritual. The pope has poured water on the feet of refugees, migrants and prisoners, and kissed them to recall Jesus’ washing the feet of his apostles at the Last Supper.

Now, Pope Francis is using his annual message for the Church-sponsored World Day of Peace, held each January 1, to further teach the Church that migrants and refugees are our brothers and sisters rather than a force to be feared. He says that those who foment fear of refugees and migrants are sowing violence, racial discrimination and xenophobia, while they could be building peace instead.

In the message entitled “Migrants and refugees: men and women in search of peace,” Francis, the son of immigrants, says, “All indicators available to the international community suggest that global migration will continue for the future. Some consider this a threat. For my part, I ask you to view it with confidence as an opportunity to build peace.”

Estimates indicate that there are currently 250 million international migrants around the world, 22.5 million of whom are refugees.

The pope says that to find peace, migrants and refugees “risk their lives” on long and dangerous trips, often enduring hardship and suffering, only “to encounter fences and walls built to keep them far from their goal.”

The pope cites two pending agreements, known as Global Compacts—one for safe, orderly migration and the other for refugees—which the United Nations is scheduled to draft and approve in 2018, as the structures in which nations can meet their obligation to ensure human rights for all migrants and special protections for vulnerable migrants, such as refugees, forced migrants, victims of human trafficking, and women and children at risk. The pope says the compacts need to be “inspired by compassion, foresight and courage” to advance peace. “Only in this way can the realism required of international politics avoid surrendering to cynicism and to the globalization of indifference,” he says.

Faith in action:
• Read and share the 2018 World Day of Peace message of Pope Francis. Gather your faith community to ask: How might the Holy Spirit be calling us to respond to the needs of our refugee and migrant brothers and sisters? http://bit.ly/WDP2018.
• Learn about and celebrate the life of Saint Frances Xavier Cabrini, an Italian immigrant to the United States who became the first U.S. citizen to be canonized. Pope Francis describes Mother Cabrini as “a remarkable woman, who devoted her life to the service of migrants and became their patron saint.” https://www.mothercabrini.org
• Send a letter to President Trump. The Trump administration announced on December 2 that the U.S. government is withdrawing from the process at the U.N. to develop a Global Compact on Migration. Ask the president to reconsider this decision. http://bit.ly/USCompact

A 'golden' partner in mission 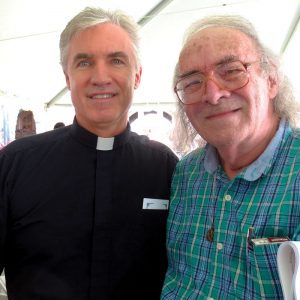 A 'golden' partner in mission

Remembering Maryknoll supporter of 50-plus years || Soon after I was ordained a Maryknoll priest in 1998, I received...