On Sunday, December 3, Cardinal Blase Cupich, archbishop of Chicago, traveled to San Juan, Puerto Rico, at the express request of the Holy Father. It was 75 days after Hurricane Maria struck the island. A casual observer might have thought that Cardinal Cupich was late. Unfortunately, it was not so. Two and a half months after Hurricane Maria left Puerto Rico devastated, the situation was becoming increasingly desperate.

More than half of the population of Puerto Rico was still without electricity and an undetermined number of people still did not have access to drinkable water. The health system was devastated, and nobody knew how many people had died because of the lack of medical services. Many schools had not been able to open, and the tourist industry practically disappeared, leaving thousands without work. 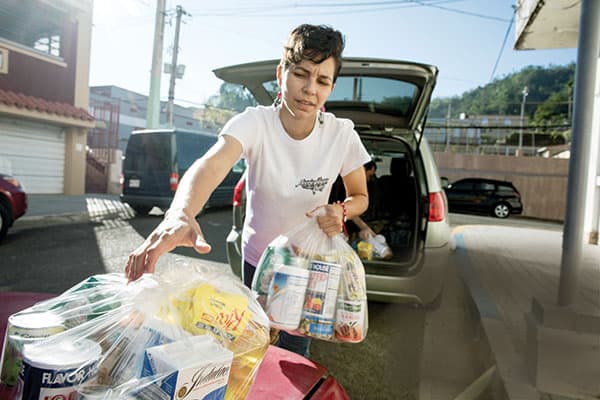 Months passed, but journalists continued reporting that as planes approached the city of San Juan, one could see blue rectangles dotting the landscape: the tents FEMA was handing out to people whose houses lost their roofs.

Under each tent lived a family that had lost everything, first their roof, and then everything that the water ruined: food, clothes, furniture and mattresses. And, after losing everything, they were living without electricity for months, and perhaps without drinking water, under a tent.

In the midst of the tragedy, Puerto Ricans have shown reserves of courage, solidarity and patience. In December, San Juan still did not have the service of traffic lights. But Monsignor Mario A. Guijarro, pastor of San Pedro Mártir parish in the area of Guaynabo, told us that motorists remained kind and patient in the midst of the daily traffic chaos.

There has even been talk of a spiritual renewal stemming from the immense pain that the hurricane has caused. When we visited Punta Santiago, a small beach town 40 miles from San Juan, the faithful of the parish seemed inspired by a sign we saw among the rubble: “Puerto Rico se levanta” or “Puerto Rico gets up.” 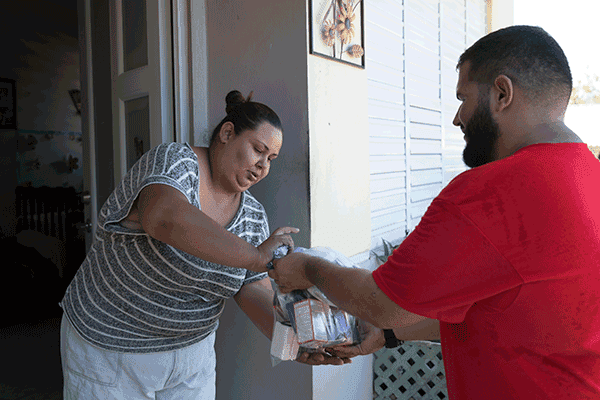 Father José Colón, pastor of the parish in Punta Santiago, said: “When I arrived here after the hurricane, it seemed as if an atomic bomb had fallen. And people said that a miracle had happened in Punta Santiago: none of the images of saints in the church had suffered any damage. But I say that the true miracle has been this religious experience, this encounter with Christ that we have seen after the hurricane. People are more united; we give a hand to each other; we feel more like brothers. The old disputes have been forgotten: now we have to give each other a hand to get ahead.”

Pope Francis has said that he wanted the Catholic Church to be like a field hospital. In Puerto Rico that metaphor became reality. The humanitarian work performed by the Church borders on heroism.

Monsignor Roberto González Nieves, who had served as a priest in the Bronx, told me in a recent interview that, although the mission of the Church is to save souls, today in Puerto Rico “not only do we have to feed the soul but also the body.”

That work has been supported by the solidarity of U.S. Catholics, as well as many other organizations and people outside the Church. Countless special coll
ections and food donations have resulted in massive aid. 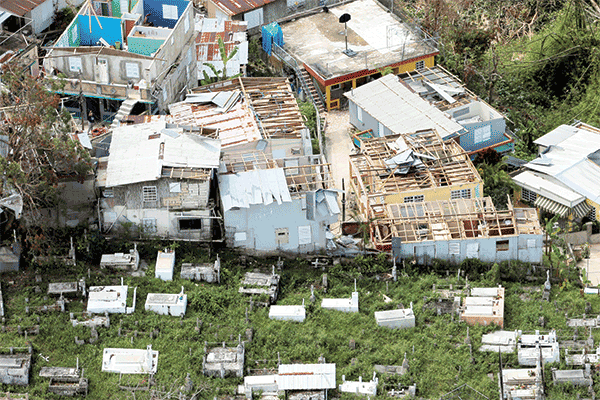 Destroyed homes next to a cemetery in Morovis, Puerto Rico. Months after Hurricane Maria, the situation remains dire. (CNS/Puerto Rico)

On October 30, Cardinal Timothy Dolan, archbishop of New York, and Bishop Nicholas DiMarzio, bishop of Brooklyn, made a pastoral visit to San Juan, carrying donations from their faithful. “Our purpose is, first of all, to show our solidarity with the local Church,” Bishop DiMarzio explained during a Mass celebrated in San Juan’s cathedral. “We come to bring much needed material help, but also a dose of solidarity and hope.”

Maryknoll Father Bob Carleton, who worked in Puerto Rico for several years as a Maryknoll mission promoter, is also hopeful for the future of the island.

“Puerto Ricans are resilient people. Hurricanes are not new to the island. However, Maria was a monster. But it was not a knockout blow,” he says. “They are people of faith. I am sure they will work together with their neighbors and will build an even better Puerto Rico in the future. May Our Lady of Divine Providence (Nuestra Señora de la Divina Providencia) guide and guard them in the months ahead.”

Featured Image: Rubble on the way to Punta Santiago, one of many areas of Puerto Rico devastated by Hurricane Maria.

Jorge I. Domínguez-López
Domínguez-López is the editor of Nuestra Voz, the Spanish-language monthly newspaper of the Diocese of Brooklyn.

Sisters' legacy of life for Salvadorans with HIV/AIDS 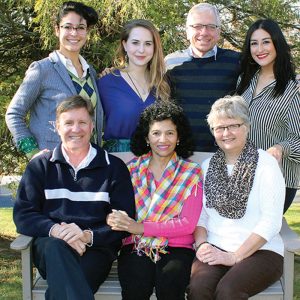 Seven Maryknoll lay missioners answer the call to walk in Jesus’ footsteps || They heard the call and responded to it.”...