A ‘golden’ partner in mission

Remembering Maryknoll supporter of 50-plus years

Soon after I was ordained a Maryknoll priest in 1998, I received a letter of congratulations with photos from my ordination ceremony. Thereafter, I began receiving greeting cards for my birthday, anniversary of ordination, Christmas and Easter each year. These were not simply greeting cards, but handwritten letters of support from a man I had never met. Four years later, I was introduced to Harry Florentine, the mystery man! I discovered Harry had been writing cards and letters to support many Maryknoll priests and brothers over the years.

Harry’s relationship with the Maryknoll Society began over 50 years ago. This excerpt from a letter he wrote to me three years ago tells the story:

It is 50 years this year I began a journey with Maryknoll. … I never became a Maryknoll missioner and never worked overseas, but I walked a parallel path beside the missioners believing totally that we are “partners in mission.” …

I knew of Maryknoll ever since I can remember because Maryknoll magazine always was on the coffee table in our living room and my mom and dad were each “buck-a-month” sponsors, having responded to a Maryknoll priest who preached in our parish many years before. Mom and Dad were proud of being individual supporters of Maryknoll and those dollars were the first “bills” paid each month.

One day the pastor of my parish asked me to reorganize the junior and senior high school religious education program. I discovered the teachers were Maryknoll seminarians. Through my contact with these seminarians, friendships developed. Letters from around the world from Maryknoll friends opened a whole new world to me and allowed me in some small way to reach out directly and help them in their overseas mission work. As the years progressed I met more and more Maryknoll missioners and was invited to ordinations and jubilee celebrations.

When I retired, I wanted to do some work as a volunteer at Maryknoll. Thanks to Maryknoll Brother Kevin Dargan, I became a volunteer in the Maryknoll Center Library, which allowed me to meet many retired Maryknoll missioners who live at the center. These “retired” priests and brothers opened me up to mission further and enhanced my thinking and adaptability to change. Without a doubt, Maryknoll has formed my thinking, brought me out of the narrow parochial world and allowed me to really see the poor, the exiled, the so-called misfits we all encounter in a new light and to realize I must play a role “to lift up all to their true worth” (words from Maryknoll hymn). Because of Maryknoll I think differently, I pray differently and I am definitely open to seeing humanity, the environment and the resources of our planet in light of the Gospel not so much in terms of charity, but in justice.

Soon after Harry wrote this letter, I had the opportunity to welcome him for a visit to my mission in São Paulo, Brazil. Later, he began sharing Sunday Scriptural reflections that he had written with Maryknoll Lay Missioners Jim and Marilyn Kott, who used them to reflect with the English-speaking women incarcerated in one of São Paulo’s prisons.

Sadly we received the news that Harry passed away suddenly on Nov. 4, 2017. But, we can be assured he continues showering us with prayers for blessings. Thank you, Harry, for your inspiration and commitment to God’s mission

Featured Image: Harry Florentine joins one of his many Maryknoll friends, Father Timothy Kilkelly, for a celebration at the Maryknoll Society center in New York. (Courtesy of T. Kilkelly) 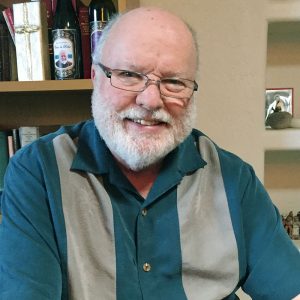 Orbis Book Spotlight || The latest volume in the Orbis Modern Spiritual Masters Series focuses on the work of Richard...

Mar 1, 2018
Copyright 2020 Maryknoll Fathers and Brothers. All Right Reserved.
Back to top