" /> Spirituality: In the Shadow of the Cross | Maryknoll Magazine

In the shadow of the cross

During my novitiate year in Hingham, Mass., a mother from the neighborhood asked a favor of us seminarians: could we take turns helping take care of her wheelchair-bound, 23-year-old son, David, who suffered from muscular dystrophy? Our duties would be to take him out of bed every morning, place him on the commode, clean him, wash him and place him in his wheelchair. In the late afternoon, we would reverse the process.

Altruistic impulses aside, we were overwhelmed by the sheer scope of the commitment. A whole year! Still, we volunteered to try and see if we were up to the task. Very soon we realized David was ministering to us. He could carry on animated conversations about religion, politics, sports and economics as well as the latest TV shows and pop culture. The time went by quickly. His mother was equally engaging—and down to earth. She’d already lost an older son to the disease. Her husband, who had helped with the boys, died of cancer earlier that year. In light of these difficulties, I asked her how she prayed. She said, “These days my prayer is simple: ‘Dear God, you’ve got to be kidding.’ ”

When David died three years later, the local parish was packed with more than 500 people. Many who had volunteered as helpers acted as honorary pallbearers, lining both sides of the aisle out into the street. Here was a young man who had touched hundreds of lives without ever leaving his house. Like St. Thérèse of Lisieux, David showed a spirit of mission from the cloister of his own paralyzed body.

Around the world during my mission career, I’ve encountered other people who didn’t just bear their individual cross; they allowed their cross to transform their lives, and by extension, to enlighten the world. I count Anglican Father Michael Lapsley as just such a person and friend. An outspoken advocate against apartheid in South Africa, he lost both hands and an eye to a letter bomb. Rather than give in to despair or bitterness, Father Michael founded the Institute for Healing of Memories, traveling the world stressing the absolute necessity for forgiveness and reconciliation, especially in our world increasingly plagued by violence and terrorism.

Donna Wienke served as a Maryknoll lay missioner teaching English at Sogang Jesuit University in Seoul, Korea. She is blind. Living on her own, she nonetheless navigated the city’s complicated bus system to go back and forth to class. One day, she lingered to prepare her lesson plan in braille. Seeing this, the cleaning woman exclaimed, “You’re blind!”

“I have a blind son at home,” the woman said. “I didn’t think blind people could do anything.”

Raphael Bae Jong Bu is autistic. Recently he traveled from South Korea with others within the autism spectrum to visit the United States to make a point: people with autism can contribute to society. He gave a flawless cello concert including Bach’s “Jesu, Joy of Man’s Desiring.”

Sickness, accidents and old age take their toll. Loved ones die. We sell our family homes. We are forced to give up not just our possessions, but our freedom. Going from walking, to using a cane, to needing a wheelchair call for enormous internal strength. Women who face mastectomies must struggle with a new understanding of their femininity. Likewise men who suffer prostate cancer often silently resent this assault on their masculinity.

While the above are dramatic examples, all of us face limitations and diminishment. And do not underestimate the psychological difficulty of forever giving up the keys to the car—symbol of freedom for so many Americans. For this reason the sign of the cross is a powerful reminder that such sacrifices need not be portents of impending death but, when embraced and joined to the cross of Christ, can in fact lead to renewed meaning and purpose. Yes, the Cross casts a shadow across all human life. But it is nothing less than the Resurrection that creates and illumines that shadow.

Featured Image: Pakistani children pray at the graves of their loved ones. (CNS/S. Akber, EPA) 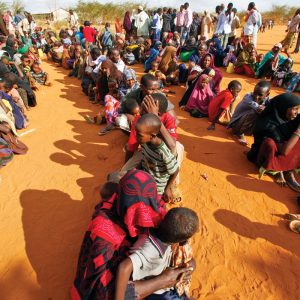 The pope says that to find peace, migrants and refugees “risk their lives” on long and dangerous trips || No one knew...