What do we do when disagreements and factions threaten to tear our faith communities apart? Certainly opposition and even persecution from the outside seem less threatening or detrimental to our Church than internal divisions. Schisms, the formal break in ecclesial communion, compromise the Church’s message and scandalize the world. Indeed, so important is Church unity that John’s Gospel records Jesus praying his followers remain one so the world might believe the Father sent him (John 17:21).

Yet divisions have plagued the Church from the beginning. The first challenge: how to welcome Gentile converts into a community made up of Jesus’ original apostles and disciples, who were all Jewish. There was one group, called the Judaizers, to whom Peter ministered, who insisted male Gentile converts first be circumcised, that is, become Jewish, before they could call themselves Christian. Paul would have none of it. As he said in Galatians, one is not saved by works of the law (or the 613 commandments in the Bible) but through faith in Jesus Christ. Paul points out if we are saved only by obeying commandments, Jesus died on the cross for nothing (Gal. 2:21). Luckily, Paul’s argument won the day.

Furthermore, Paul publicly criticized Peter for what he saw as Peter’s inconsistency and hypocrisy. When Peter was among Gentile Christians, he ate with them (ignoring the belief that a circumcised Jewish Christian could not sit at the same table as a Gentile Christian without falling into impurity), but when the Judaizers showed up from Jerusalem, Peter went back to kosher living. Paul writes in Galatians 2:11, “When Cephas (Peter) came to Antioch, I accused him to his face, for he was clearly in the wrong.” Wow. Paul, the latecomer to Christianity, had the temerity to openly rebuke Peter, who had been personally chosen by Christ to head the Church!

On June 29 we celebrate the feast of Saints Peter and Paul. It’s also the Maryknoll Fathers and Brothers’ Foundation Day, when we commemorate Pope St. Pius X granting permission to start a mission seminary to Fathers James A. Walsh and Thomas F. Price in 1911. The day has extra significance because, besides being the two pillars on which the early Church was built, Peter and Paul were also great missionaries. And although they disagreed publicly, they put aside their differences for the good of the Church, as did our founders.

Father Walsh was a no-nonsense, practical person with the vision of overseas mission, while Father Price was a mystic who wanted to focus on mission in the United States as well as overseas. Despite their differences in vision and style, both men came together to found a society of priests and brothers dedicated to worldwide mission.

Today, serious differences still threaten Church unity. A vocal minority insists Communion is more properly received on the tongue, preferably while kneeling. Some would go so far as to call Communion in the hand blasphemous. Many of these prefer the Mass in Latin. One group questions the validity of Vatican II, another group defends the changes it initiated, and yet another insists the changes went too far. We can debate what divides us, but we cannot honor the Lord’s presence in the Eucharist, whether kneeling or standing, if we ignore the Lord’s prayer for unity.

Like Peter and Paul, like Walsh and Price, let our discipleship outshine our divisions and let the blessed bread, broken and shared, become the Eucharist that unites us.

Featured Image: Huge statues of Saints Peter (left) and Paul in St. Peter’s Square at the Vatican remind all of the two pillars on which the Church was built. (Courtesy of D. Mastrogiulio)

A ministry of medicine 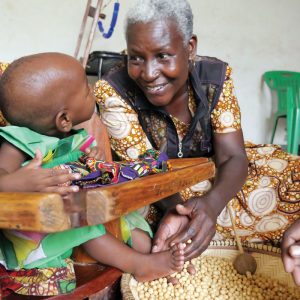 A Tanzanian woman partners with Maryknoll missioners to build a parish team in Mabatini in Mwanza || Natalia Joseph...