Four years ago, an oil spill fouled the river that was the only source of water for drinking, cooking and bathing in the Kukama Indian village of Cuninico in Peru’s Amazon basin.

César Mozombite and Flor de María Parana, leaders of the village’s Catholic community, have struggled since then to help their neighbors recover from the disaster. But their efforts to get safe drinking water and health care are mired in lawsuits and government red tape.

So when Pope Francis visited the Amazonian city of Puerto Maldonado, in southeastern Peru, and called the Amazonian forests and rivers “holy ground,” Mozombite felt the pontiff was speaking to him.

“What filled me with the greatest joy was when he mentioned the constant oil spills in the Amazon. He said they are a threat to life and a concern to families, and that they have harmed communities in the Amazon,” said Mozombite, who was among some 3,000 indigenous people from Peru, Brazil and Bolivia who met with the pope on January 19.

In a weeklong trip to Chile and Peru between January 15 and 21, Pope Francis urged his listeners to be united in hope as they face their countries’ many afflictions, including natural disasters, corruption, organized crime and domestic violence. He called for politicians to listen to the people who are on the “periphery” of society—indigenous people, the poor, the elderly, children, migrants. 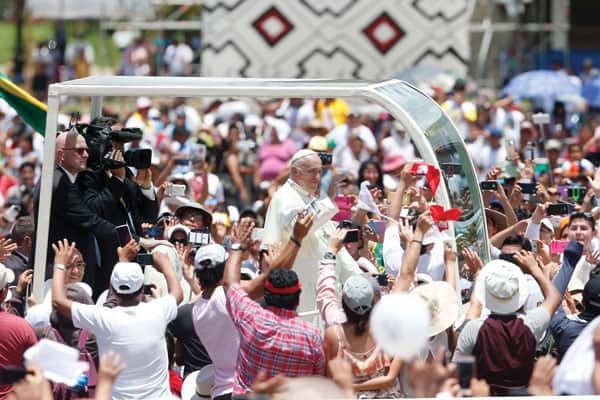 Pope Francis arrives for a meeting with the people at Jorge Basadre Institute in Puerto Maldonado, Peru, during his apostolic visit in January. (CNS/P. Haring/Peru)

He saved one of his most supportive messages for the indigenous people of the Amazon. “Those of us who do not live in these lands need your wisdom and knowledge to enable us to enter into, without destroying, the treasures that this region holds,” Pope Francis told his listeners, “and to hear an echo of the words that the Lord spoke to Moses: ’Remove the sandals from your feet, for the place on which you are standing is holy ground.’ ”

Before the pope’s speech, two Harakbut women and an Awajún man described the threats that their communities face from loggers, miners and other outsiders who strip their lands of their natural wealth. They told Pope Francis they feared that their cultures would disappear if the devastation continued.

“The native Amazonian peoples have probably never been so threatened on their own lands as they are at present,” Pope Francis said. “Amazonia is not only a reserve of biodiversity, but also a cultural reserve that must be preserved in the face of new forms of colonialism.”

Governments and companies engaged in oil and gas production, mining, logging, industrial agriculture and even conservation programs too often fail to take into account the indigenous peoples on whose lands they operate, the pope said. (See World Watch.) 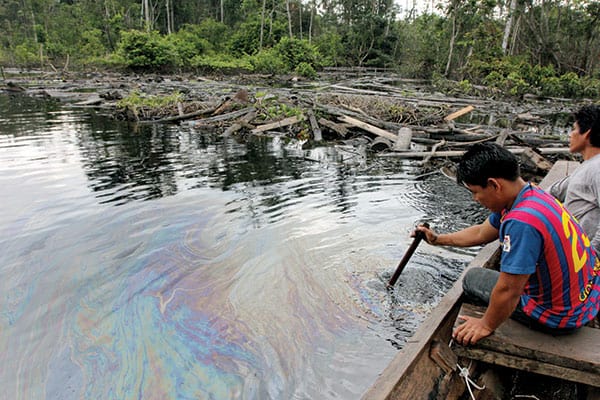 A Kukama man examines an oil slick after a pipeline spill occurred near his village in the Peruvian Amazon. (B. Fraser/Peru)

He called for special protection for semi-nomadic tribes that live in the heavily forested area along the border between Peru and Brazil, shunning contact with the outside world. Those groups are “the most vulnerable of the vulnerable,” he said, because they can be decimated by illnesses like the common cold, to which they have no resistance, and they cannot speak up for their own rights.

Pope Francis particularly wanted to meet with Amazonian peoples because he has called a Synod for the Amazon, a special meeting of bishops, for 2019 to address the urgent environmental and social issues affecting that region and its people.

“The defense of the earth has no other purpose than the defense of life,” the pope said. His words resonated far beyond Puerto Maldonado.

“He could have been speaking to the indigenous men and women of the highlands,” said Maryknoll Sister Patricia Ryan, who works with lawyers and educators in Puno, Peru, to defend the human and environmental rights of Aymara and Quechua people high in the Andes Mountains. (See July/August 2017 issue.) “It’s so key that he chose to shine light on issues involving the environment and indigenous people, which are usually kept in the dark and not talked about.” 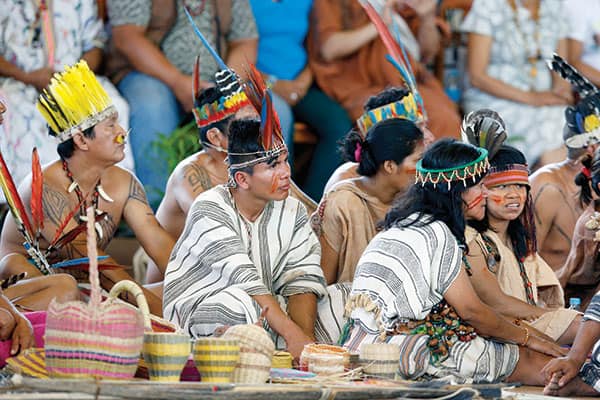 Indigenous groups from the Amazon region listen to Pope Francis during his meeting with them at Madre de Dios stadium in Puerto Maldonado. (CNS/P. Haring/Peru)

The way Pope Francis drew connections between environmental and social problems was especially important, she said.

On his journey to the Amazon, the pope flew over an area where illegal gold mining has turned the landscape into a moonscape, with huge, water-filled craters forming scars visible from outer space. That type of mining, he said, has been accompanied by the trafficking of people for sex and labor. Sister Ryan has seen the same tragedy in the highlands.

In Andean towns and cities where jobs are scarce, young people answer advertisements seeking people with a “nice appearance” for jobs that supposedly pay well, she said. Once they accept, they are trapped by traffickers who confiscate their identity documents and take them to places like the sweltering Amazonian gold fields or frigid mining camps high in the mountains.

Girls as young as 12 or 13 are forced into prostitution, as are some boys, Sister Ryan said. Other boys and young men are put to work in the gold mines. “They’re lost there, pretty much forever,” she said.

Even legal mines are a magnet for traffickers who force women into prostitution, Sister Ryan added. “No matter where there is mining, you’re going to have human trafficking.”

Pope Francis said all of society must answer for the scourge of human trafficking for labor and the sex trade.

“Where is your brother or sister who is enslaved?” he asked. “Let us not look the other way. There is greater complicity than we think. This issue involves everyone.”

Indigenous people’s lives are closely interwoven with the land, forests, rivers and lakes, Pope Francis said, but they often have no say in how their land is used. Peru has a law requiring that indigenous communities be consulted about projects that would affect their communal rights, but enforcement is inadequate, Sister Ryan said. 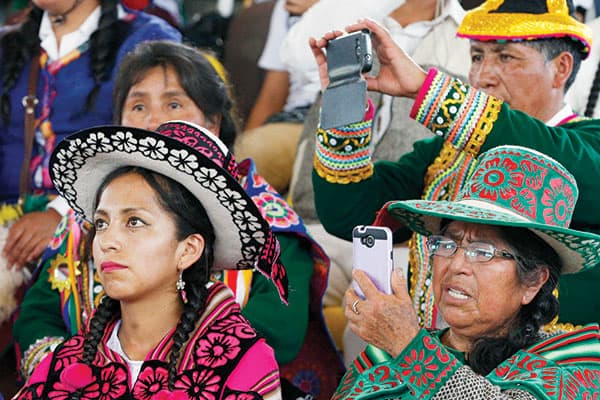 People in traditional clothing take photos during a meeting with Pope Francis, where
he talked about the environment and the need to protect the people. (CNS/P. Haring/Peru)

“It’s where indigenous people are, in the jungle or the mountains, where you’ll find minerals and oil and gas,” she said.

Conflicts between those industries and local communities could be avoided if indigenous people’s rights were respected, Sister Ryan said. But when indigenous communities protest oil, gas or mining concessions on their lands, government officials sometimes accuse them of blocking the country’s development.

Pope Francis told his listeners—including the Peruvian and other officials who had front-row seats—that the accusation is not true.

“If, for some, you are viewed as an obstacle or a hindrance, the fact is your lives cry out against a style of life that is oblivious to its own real cost,” he told his indigenous listeners and the church workers—many of them missionaries—who accompanied them.

In countries like Peru, which still depend heavily on the export of raw materials such as timber and minerals for the revenue they need to reduce poverty, Pope Francis’ words are a wake-up call and a challenge, Sister Ryan said.

“Development has to sustain life, not just of the human population, but all of Mother Earth,” she said. “We are all interrelated. We need to protect Mother Earth if there is to be a future for the generations to come.”

Featured Image: Pope Francis greets members of an indigenous group from the Amazon region during his visit to Puerto Maldonado, Peru. (CNS/P. Haring/Peru) 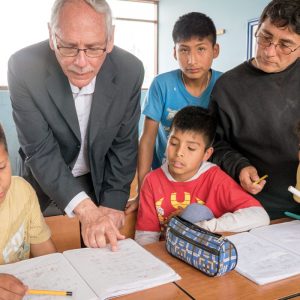 Maryknoll affiliates carry on the work of retired missioner in Lima, Peru || Fiorela Gonzales remembers how she and her friends...