As a teacher in southern Sudan during the 1980s and 1990s, I recall the first time I was writing on the blackboard and turned around to discover my whole class had left. The children could hear the drone of a dreaded bomber long before I did, and, like a flock of birds taking off, they were gone, out into the trenches they had dug around the school for safety.

That scene would play out many more times during those days when civil war was raging between the northern government of Sudan and the southern Sudan People’s Liberation Army, fighting for independence.

Of course, the bombing would end classes for the day. But the next day all the children would be back in school as if nothing happened.

People asked us sisters serving there, “Why do you stay?” We often asked ourselves that question. The answer always came back to us: “We stay because we love these people, who have known nothing but war.”

For me, that was particularly true with regard to the children. I arrived with other Maryknoll sisters to begin my new assignment in southern Sudan in January 1983. Just a few months later, civil war broke out. Initially the fighting was far from where we were serving, just outside the city of Juba.

The village school had closed several years before. My job was to start it up again. On registration day, 125 children, ranging from 5 to 13 years old, appeared. We divided them by age into three groups. A mother, a catechist and I became their teachers. What amazed me was how anxious the children were to come to school even though at first all we had were notebooks, pencils and blackboards. By 1992 we were a school of over 400 students. 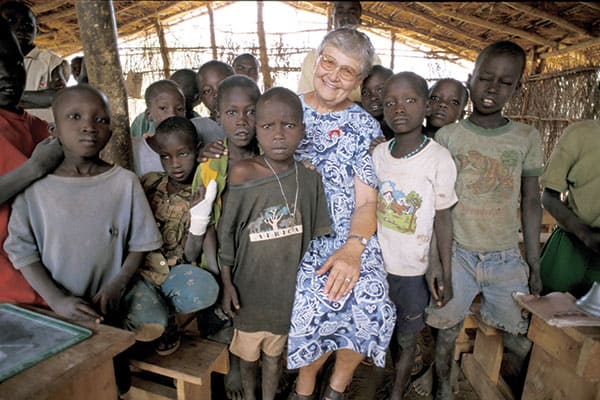 Maryknoll Sister Mary Ellen Manz smiles with students in southern Sudan. The missionary was a teacher in that African land for 25 years. (S. Sprague/S. Sudan)

As war got closer to us, we were forced to evacuate. I can still see those villagers walking stoically with their children, each one carrying whatever they could. They had to camp in empty fields for two months before returning to the village.

Eventually, we all had to leave for good. A camp for the displaced was set up outside Juba and the people lived there in makeshift tents. The principal of the parish school in Juba welcomed us to use the school to teach the displaced children in the afternoon after his students went home. To my surprise, all but two of my students came back to class, even though they had to walk several miles in the heat of the day from the camp to school. They never complained.

Often Juba was being shelled, and I feared the children would panic and trample each other, but the older ones looked out for the younger ones and each child knew where to go during the raids. Thankfully, not one child was hurt or killed.

Each day our oldest boys lit the fires and filled drums with water ready for the mothers who came to make porridge, which kept our children alive. Wood was scarce, so we asked each child to bring one piece of wood to school each day. I must admit I looked the other way when some of the little ones arrived with slats from people’s fences.

After years of terror and many forced evacuations for us and the people we served, the civil war finally came to an end in 2005, and in 2011 South Sudan became an independent nation. But now ethnic fighting is tearing the new country apart.

I think of the children, who remain so much a part of me. Jesus said, “Let the little children come to me, and do not stop them.” I pray that war and fear in South Sudan will come to an end and that the children there may know that the Kingdom of God belongs to them. 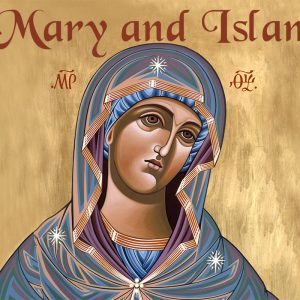 Maryknoll priest reflects on Muslim reverence for the Virgin Mary || In the city of Zamboanga on the island of Mindanao...