Two years after gaining independence as a new nation in 2011, South Sudan once again slipped into civil war, the third time in more than 60 years. This time the conflict is between the country’s two largest ethnic groups, the Dinka led by President Salva Kiir and the Nuer led by former Vice President Riek Machar. More than 2 million people have fled South Sudan to escape the fighting. Among them is Ocan Robert, 31, a clan leader of the Acholi tribe. A Catholic, like the majority of the Acholi, Robert strives to be a peacebuilder in his divided community from the town of Pajok who are now in the Palabek Refugee Settlement in Uganda. He spoke with Lynn F. Monahan, editor-in-chief of Maryknoll magazine, there in January.

“Everybody is here. The ex-combatants from both sides are here. And then you have the civil population. … We don’t know when the war will end, and so if we allow the rift to continue, by the time the war ends, we’ll be having a lot of wounds in the heart that cannot be healed. … ‘Oh, you’re the one who did this. It was you who made my brother to be killed. It was you who looted.’ So, we need to be closing some of these small, small chapters immediately as they come out. 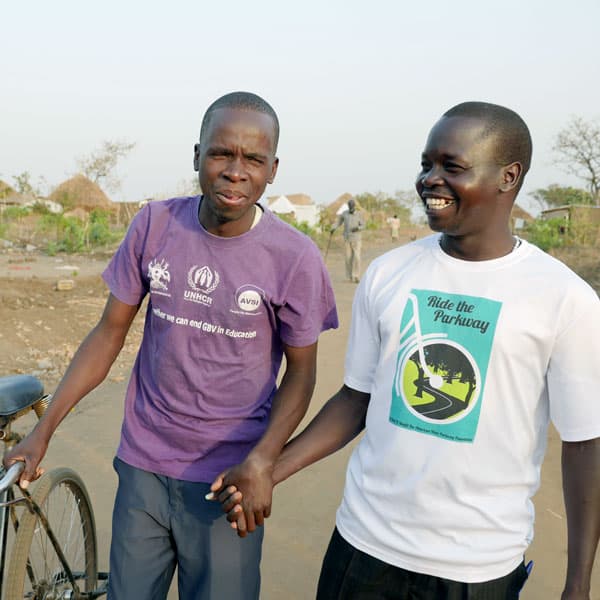 Ocan Robert, a clan leader of the Acholi people of South Sudan, chats with friend at a
refugee settlement in Uganda.

“This politic broke the Acholi as a tribe in two. So, you are either for the government or you are treated as a rebel supporter. … Our community is strategic. It is close to the border. There’s water flowing. The community is an agricultural community; there’s a lot of food. And then there’s some mountains. So (the rebels) chose our area to be their base. … There are times when the government comes and attacks them. … The community sort of changed hands between rebels and the government forces.

“I personally found myself knocking heads with the rebels and with the government until at one point the rebels came and arrested me with other leaders who worked with me in South Sudan. We were detained for three days, thrown down a big hole. I personally was given 100 lashes with some of the leaders. … Then they released us.

“The community was on a knife edge and all depended on me. If I were to go with revenge and hatred, that would mean the community would take that direction immediately. So, I opted to go for forgiveness.

“For example, when we came in April, some of the rebels left and fled with us. Among them was one who executed the order of this commander who gave me the 100 lashes. … The police told him, ‘With this we cannot let you stay in the reception (area) with the rest of the community because it will be risky. Some people will know you are on the rebel side, and some ex-combatants from the government side who are here will not see you well, so we will take you to the house of the refugee leader.’

“He was brought to my house, the one who lashed me. … So, I accommodated him, gave him water, he bathed, he ate and the next morning we took breakfast. … It was not easy for my wife anyway. But I calmed her down and I explained to her. At last, when he was leaving in the morning, he told me, ‘When you offend an individual and you don’t reconcile, it’s the worst offense.’ I told him, ‘This is life. You and I have to lead the process of forgiveness again.’ So, he’s here in the settlement and we are living with him. … It’s not an easy step but you have to do it so you have the courage and the energy to speak to people and challenge them to reconcile and forgive each other.” 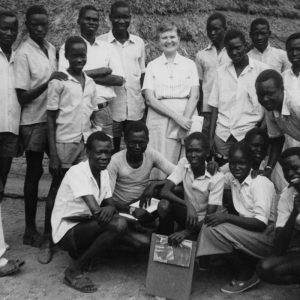 Sister Mary Ellen Manz remembers the students she taught in the 1980s and 1990s in war-torn southern Sudan || As a teacher...