On March 24, 1980, we Salvadorans wept when a killer’s bullet silenced the voice of the voiceless, Archbishop Oscar Arnulfo Romero, head of the Archdiocese of San Salvador, El Salvador.

We will cry again on Oct. 14, 2018, but this time, it will be tears of joy in recognition of the priceless and powerful voice Romero became for us, the little people. That day, he will be canonized a saint, not just for the poor and oppressed of El Salvador but for all who share their suffering.

In his three years as archbishop, Romero defended his people from the repression of a military government. He did that from the perspective of the Gospel. In simple but deeply theological language, he wrote homilies that were understood by the poor, but often misunderstood by the powerful.

The Sunday Mass was prime time for all of us because Archbishop Romero incarnated the word of God in the reality the country endured. He brought hope to the families of those who disappeared. He challenged the government to explain the crimes committed against the people.

Like the prophet Ezekiel, Archbishop Romero listened to the Lord: “Son of man, stand on your feet that I may speak with you!”

The archbishop taught us that a person who listens to the Lord will never be dominated. “They can kill me,” he said, “but not the voice of justice.” 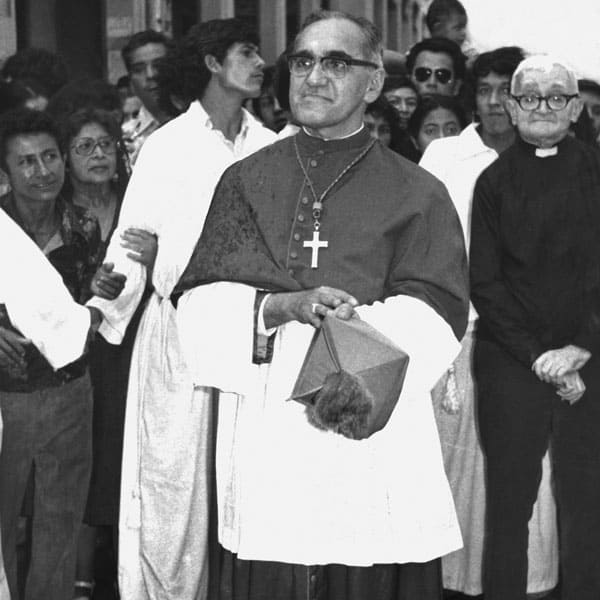 Archbishop Romero joined his beloved people in a procession in San Salvador.

By nature, he was a man of few words: discreet, timid, introspective, fearful at times. But he was also a man of prayer, which led him to become an outspoken defender of human rights.

That was the Romero I met on this earth, the one who embraced me, shook my hand, scolded me, and challenged me to be a better human being.

He was killed while celebrating Mass to honor the memory of his friend’s mother at the Divine Providence hospital.

El hospitalito (little hospital), as those who worked with the archbishop know it, provides palliative care for people suffering from cancer. It was home for him as well.

In his apartment there he received politicians, religious, diplomats, military officers, leaders of popular organizations, and everyone who sought his help. There he prepared his Sunday homilies and recorded his audio diary.

I frequently spent time there during my days as a seminarian, when I documented the archbishop’s life and work in photographs and radio interviews. I remember interviewing him one day after he had received a death threat. The Catholic radio station had been bombed and many other radio stations refused to play that interview. Finally, one station manager had the courage to broadcast it. That interview was heard throughout five Central American countries, and the outpouring of solidarity in a matter of days was overwhelming.

Today the archbishop’s little apartment is a museum and holds some of the items belonging to him, including the vestments he wore at the moment of his death. There, visitors can see some of the many photographs I took when I traveled with him on his pastoral rounds. 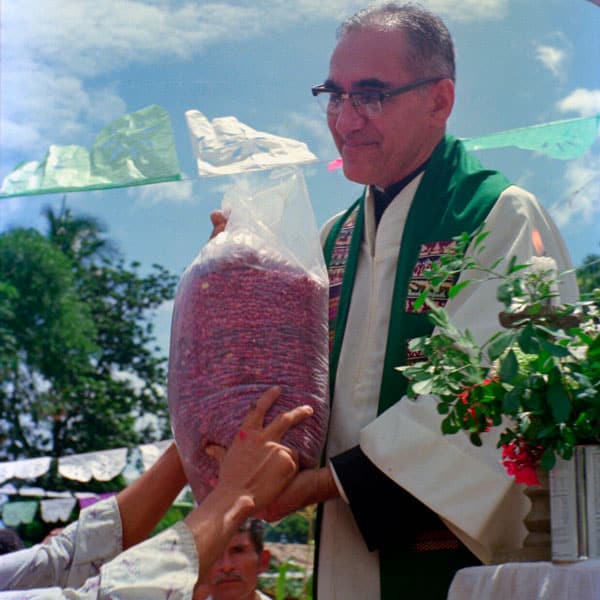 Archbishop Romero receives a sack of beans from Salvadoran parishioners outside the church of San Antonio Los Ranchos in Chalatenango.

The Carmelite Missionary Sisters of St. Therese have done a wonderful job of preserving these relics. Most people still wonder why the archbishop ended up living on the grounds of a hospital. Quite simply, the archdiocese did not have a house for him and the sisters provided him with a place to rest.

These sisters witnessed his martyrdom and cleaned the blood spilled on the floor behind the altar where he fell when he was shot. Some of us close to him still keep little pieces of cotton stained with the blood of the martyr, a precious relic, now that we are approaching his canonization.

Archbishop Romero stood by his people to the very end. He recognized that it was the duty of the Church to defend the dignity of all human beings. That was the real meaning of his weekly radio program, in which I had the opportunity to participate.

“The Church,” he said, “the defender of the rights of God, of the Law of God, of human dignity, of the person, cannot remain silent before such an abomination. … In the name of God, in the name of this suffering people whose cries rise to heaven more loudly each day, I implore you, I beg you, I order you in the name of God: stop the repression!”

On the day of his canonization, I will shout with joy. Romero is present among us, like all the holy people we venerate. Romero is a saint for the world.

Featured Image: Archbishop Oscar Romero prepares to deliver a radio homily in which he defended the rights of all people. 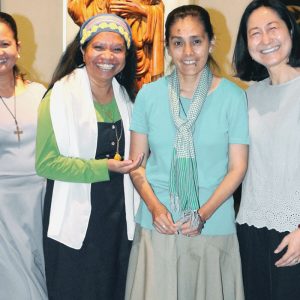