The Maryknoll Society celebrates a century of going forth in mission

When Maryknoll priests and brothers mark the 100th anniversary of their first mission sending on September 7, one missioner in particular will be basking in the joy of this milestone: Father Lawrence Schanberger.

“The anniversary means recalling my very reason for being here,” says the 96-year-old missioner, who was on his way to becoming a diocesan priest in Baltimore, Md., when Maryknoll Bishop James E. Walsh came to visit the diocesan seminary. 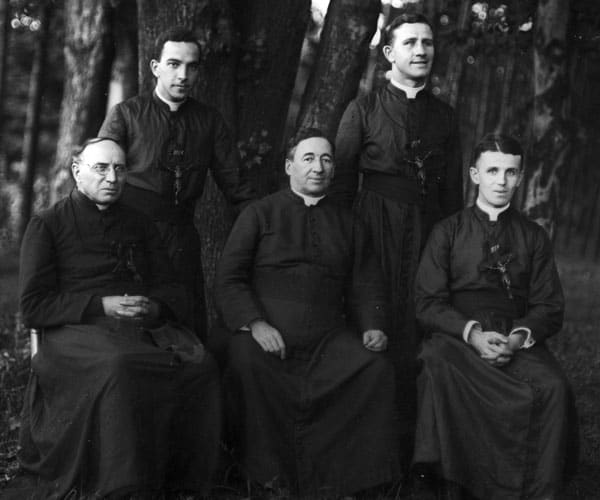 That was 1942, just 24 years after Bishop Walsh, then a newly ordained priest, went forth with Maryknoll Fathers Francis X. Ford, Bernard F. Meyer and Maryknoll co-founder Father Thomas F. Price as the first group of U.S. Catholic missioners “to bring the Gospel” to southern China.

It was not the bishop’s tales of evangelizing in a far-off land that most impressed young Larry Schanberger but the witness of the missioner’s life. “The priest who went to pick up Bishop Walsh at the train told us how the bishop spied an old man shivering in the station and went over to him and talked with him,” says Father Schanberger. “Then the bishop placed his coat on the man, gave him a blessing and said, ‘Please forgive me, but I have to leave to go and give a talk.’ ”

Father Schanberger’s eyes well up with tears as he continues, “When I heard that story, I said, ‘I want to follow someone who would care so much about the poorest of the poor.’ I knew God was calling me to Maryknoll.”

Few if any of today’s missioners have been so directly influenced by one of Maryknoll’s pioneers. But all strive to carry on their legacy, whether in China or other countries in Asia, Africa and Latin America. 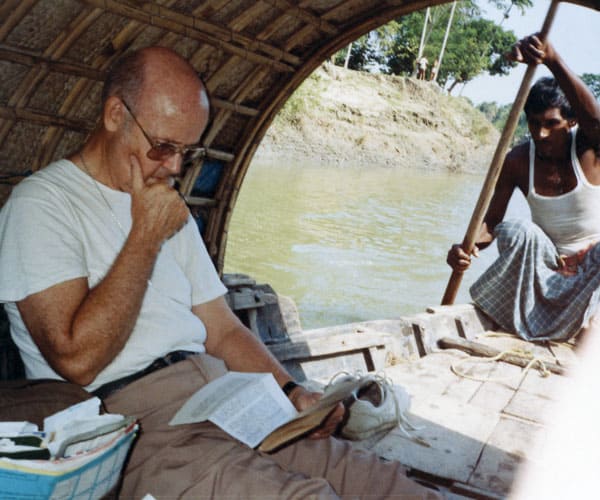 Serving in Bangladesh, Maryknoll Father Lawrence Schanberger regularly got a ride from Sultan, a Muslim boatman who became his friend. (Maryknoll Mission Archives)

He says it was young Father James E. Walsh who painted the picture of the people Maryknollers seek to serve by describing a poor farmer boy he saw working in a rice field in China: “ ‘I choose you,’ sang in my heart as I looked at my awkward farmer boy, perfect picture of the underprivileged soul … the overworked and overlooked, the forgotten and despised … I choose you and dedicate myself to you and I ask no other privilege but to devote the energies of my soul to such as you.”

That commitment has echoed through the ages as Maryknoll missioners have met “farmer boys” who changed their lives.

For Father Robert Jalbert it was a blind grandmother in Tanzania named Elizabeth who offered him two eggs and taught him that the poor have gifts to share and he must be open to receive them.

For Father Stephen Judd it was two Aymara catechists, Mariano and Pedro, whose witness of faith in remote communities in Peru opened to him the spiritual treasures of indigenous people.

In Thailand a dying Buddhist monk named Sanaan prayed with Father Michael Bassano and said, “Jesus and Buddha are brothers,” reminding the priest that all religions can learn from each other. 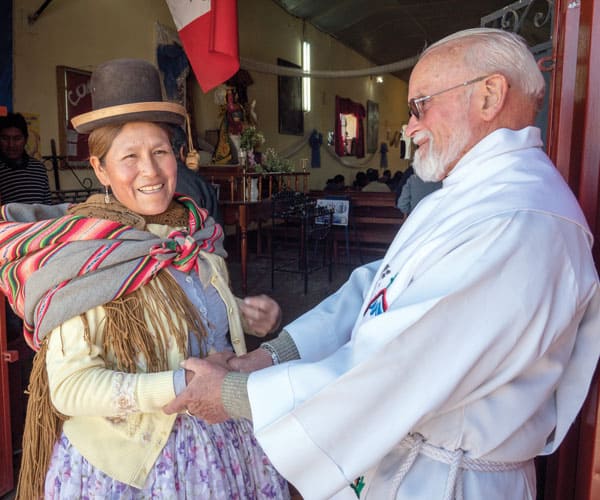 Such testimonies reveal an understanding of the missionary vocation that has evolved over the last 100 years. “Mission is not just from the ‘Catholic’ world to the ‘pagan’ world,” says Father Finch. “It is not only from the West to the East, from the North to the South. Today mission is from everywhere to everywhere.” Hence, he says, the Maryknoll Society has begun to welcome new members from overseas countries where Maryknoll missioners serve, such as John Siyumbu, from Kenya, a Maryknoll seminarian now doing his overseas training in Bolivia.

“When the first group of Maryknollers went overseas in 1918, in the eyes of the Church, the only missioner was the priest,” says Maryknoll Brother John Blazo. “Laity and religious sisters and brothers were seen as auxiliaries, doing whatever was necessary so the priest could do his ministry, which was primarily sacramental.”

Early on, however, one of the Maryknoll pioneers, Father Francis X. Ford, recognized the need for women religious to minister to the women of China. At his request, the first group of six Maryknoll sisters joined the mission in China in 1921. So indispensable was their contribution that Father Ford wrote: “I think … there is very little future for any mission that has not sisters working there.”

The role of the brothers gradually expanded to include catechesis and social justice work as well as ministries to youth and young adults, such as those Brother Blazo undertook in Central America. 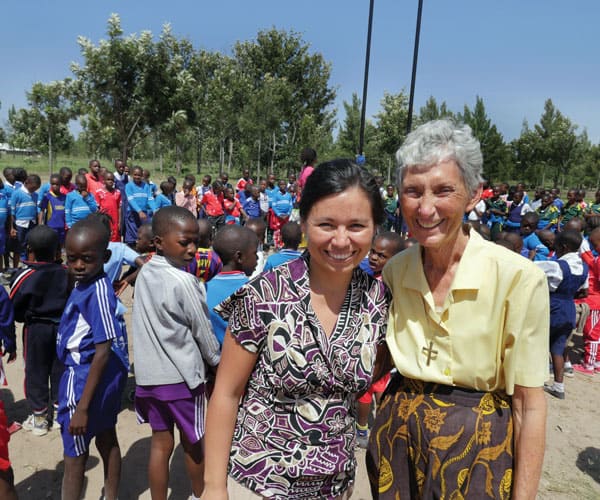 The Second Vatican Council (1962–1965) affirmed that mission is not the sole prerogative of clergy and religious but that all are called to mission through baptism.

In 1975 the first Maryknoll lay missioners were sent overseas and eventually became the third expression of Maryknoll. In 1991 Maryknoll invited those interested in mission to form local chapters to support each other in service ministries at home and overseas. The Maryknoll Affiliates was born, and now includes 50 chapters in 10 countries.

Deacon Matt Dulka and Anna Johnson, Maryknoll mission promoters, say that perhaps the greatest advocate today of the missionary vocation of all Christians is Pope Francis. They cite the pope’s 2013 apostolic exhortation The Joy of the Gospel, which, they explain, “challenged the Church to reorient itself in its understanding of mission to what the bishops called for in Vatican II: namely a better grounding in the model of missionary discipleship set by Jesus and the early Church.”

Encounter is the heart of missionary discipleship, Dulka and Johnson say. They quote Pope Francis: “Whenever we encounter another person in love, we learn something new about God.”

“The average person in the pew will still point to a priest, brother or sister as the missioner who is sent to evangelize in a place faraway,” Father Jalbert adds. “We at Maryknoll are working to help people realize their own call to be missionary disciples wherever they are.” 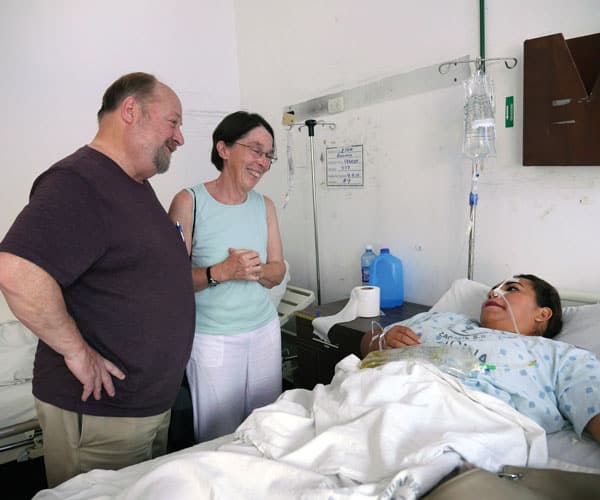 Some, like Magdalena Arellano, who works in the Los Angeles Mission Office, have come to understand their missionary vocation through encounters with colleagues.

Others discover their vocation in retreats and workshops and on short-term immersion trips the Maryknoll Society sponsors, often with other missionary groups, at home and abroad. Rosina Hendrickson, who worked at the Department of Evangelization and Catechesis for the Diocese of Sacramento, Calif., went on an immersion trip to Jamaica. There she saw the face of God in several of today’s “farmer boys,” including 9-year-old Jevaughn, a child with developmental disabilities “giving hugs to everyone.” She concluded, “The people I encountered during my week in Jamaica reminded me that I am called to be the face of God to others and that I must be joyful and loving to all those I meet.”

As Maryknollers give thanks for what has been and go forward to continue meeting God on the margins of society, Father Schanberger shares these words of wisdom: “Mission starts with the spiritual life, asking God, ‘What do you want us to do today?’ As long as we listen, God will show us the way.” 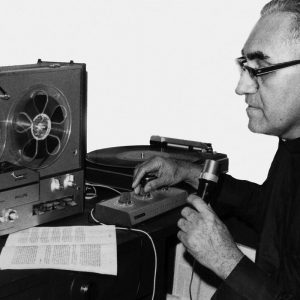 A Franciscan brother recalls his time and work with the living saint || On March 24, 1980, we Salvadorans wept when...