Making do is sometimes all you can do inside the United Nations camp for internally displaced people in Malakal, South Sudan, where I serve as a Maryknoll missioner. Recently, that meant improvising a one-wheeled ambulance to get a couple of ailing women to the camp’s Doctors Without Borders hospital.

The Catholic community at the camp, which was established after civil war broke out in the fledgling country in 2013, called on Nyacong Achol, a 60-year-old woman who lives in a tent with her two older sisters. She had been sick for a while and unable to eat much. When I asked her sisters if I could take her to the hospital at the camp, they agreed to come with us.

Because there was no transportation available on a Sunday afternoon, our only other option was to take her by wheelbarrow. A young man there brought his wheelbarrow with a blanket in it and she lay down with all of us supporting her on each side. Nyacong was diagnosed as having tuberculosis and, fortunately, is recovering gradually with the medicines prescribed by the doctors.

A few days later, we went to visit a young woman in another tent whose name is Christina Oyai. She is 24 years old and had just given birth to a stillborn child. She was suffering from a swollen abdomen as well as an infection in her right leg. We also brought her to the hospital by wheelbarrow. The doctor told me that she has ovarian cancer that is spreading throughout her body. Christina remains at the hospital with little hope of recovery. Her mother and family members are with her daily caring for her.

I remember the lines of the poem by William Carlos Williams, “so much depends upon a red wheelbarrow,” and I will never forget the wheelbarrow journeys of these two women, who are continually in my prayers.
Michael Bassano, M.M.

To enhance the nutritional and economic situations of poor rural families in El Salvador, where my husband Erik and I were serving as Maryknoll lay missioners, the parish had an active Pelibuey sheep program. Pelibuey are short-haired sheep that do not grow wool and thrive in hot, tropical conditions.
Shortly after we started working in the parish, we participated in an animal husbandry program that preceded the distribution of sheep to 30 prescreened families. One of the terms of agreement for receiving a sheep was that the families return the firstborn lamb to the project at two months of age to help keep the program going. Although most people had no experience breeding animals, the ewes given that day were all pregnant. We were part of the Pelibuey committee that met regularly to address the needs of the sheep owners and provide ongoing training. When visiting families in the area, we were always thrilled to see the docile sheep and the lambs grazing on their homesteads.
Margo Cambier, MKLM

The many coral island atolls in the Marshall Islands are widely scattered in the vast Pacific Ocean. When I first arrived there for mission in 1981 as a Maryknoll sister, the only means of transportation between the island atolls was by a government ship. Desiring to learn the Marshallese language on an atoll that would immerse me in the language, I joined Maryknoll Sisters Rose Patrick St. Aubin and Joan Crevcoure on their next journey from Majuro Atoll to Jaluit Atoll. I learned quickly what a poor sailor I was when I indecorously “lost” everything I’d eaten during the first day and had a hard time even keeping myself balanced for the duration of the trip.
I served in the Marshall Islands for 12 years. I gradually learned how to speak Marshallese with the help of patient Marshallese tutors, but never became proficient in ocean travel. Amazingly, each time my feet landed on the coral shore after every inter-island trip, I was cured of all ocean travel symptoms immediately!
Aurora de la Cruz, M.M. 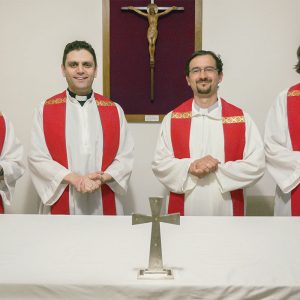 The Maryknoll Society celebrates a century of going forth in mission || When Maryknoll priests and brothers mark the 100th...

Sep 1, 2018
Copyright 2019 Maryknoll Fathers and Brothers. All Right Reserved.
Back to top