Walking toward peace in Central America

Before the current wave of gang violence began driving hundreds of thousands of people, mostly youths and mothers with children, from Central America in search of peace and refuge, a courageous Maryknoll priest from Connecticut was working to counter the influence there of the criminal gangs called maras.

Caminando Por La Paz, meaning “Walking for Peace,” was founded by the late Maryknoll Father Thomas Goekler as a program to help pull young people in Central America out of the poverty and violence there. Although Father Goekler passed away from a heart attack in 2010, his legacy lives on in an impoverished, inner-city neighborhood in Guatemala City, through the Maryknoll Affiliates chapter that he started.

“One of the biggest tasks that we are dealing with, and doing in indirect ways, is giving a better sense of values to the people in the neighborhood and teaching them to be responsible to themselves,” says Ron Covey, an 81-year-old member of the Maryknoll Affiliates, who has been working with the young people of Caminando for the past 15 years. 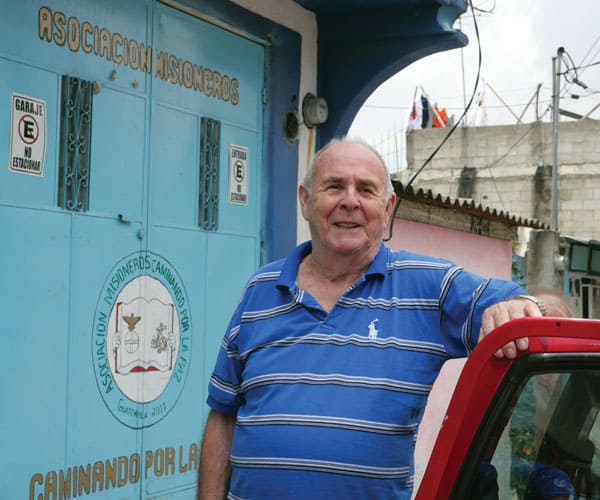 Ron Covey, a Maryknoll affiliate from Texas, stands outside the metal doors to Caminando
Por La Paz in Guatemala City.

Father Goekler became a figure of hope and peace there, and gathered a core of dedicated Catholic youth. He discouraged them from joining gangs by offering education and social action in their community to keep them busy. They constructed houses for the poor and ran a daily soup kitchen in Chamelecón.

When the Maryknoll Fathers and Brothers closed its mission in Honduras in 2008, Father Goekler and some of his young Honduran followers relocated to a dangerous area in Guatemala City, called Zone 18. The MS 13 and MS 18 gangs are also active in the area. The missioner from New Haven, Conn., purchased a ruin of a house that was basically a garage with double metal doors from which he continued the group’s work and function as a Catholic Worker house.

Father Goekler made each of those living and working voluntarily at the house a member of the Maryknoll Affiliates, an organization of people who identify with the Maryknoll movement and its vision, spirit and charism, while remaining in their own communities. The Maryknoll Affiliates are organized into some 50 chapters, located mostly in the United States but also in Central and South America, Asia and Africa.

Thus, the philosophy of Caminando is based on the same four guiding pillars of the Maryknoll Affiliates: community, spirituality, global vision and action. The members of Caminando carry out that vision by continuing Father Goekler’s ministry of offering hospitality, feeding the hungry and providing educational opportunities for those in the community.

Covey has for years flown down monthly to Guatemala from Houston, Texas, to help out while also doing fundraising for the group in the States. He says his fundraising is just enough to keep the group going, calling that “God’s miracle.”

“I do my best when I’m down here, but it’s really the young people who run the place and make the decisions,” he says. “I am totally amazed by this young group, none of whom are over 30 yet, and the things they do.” 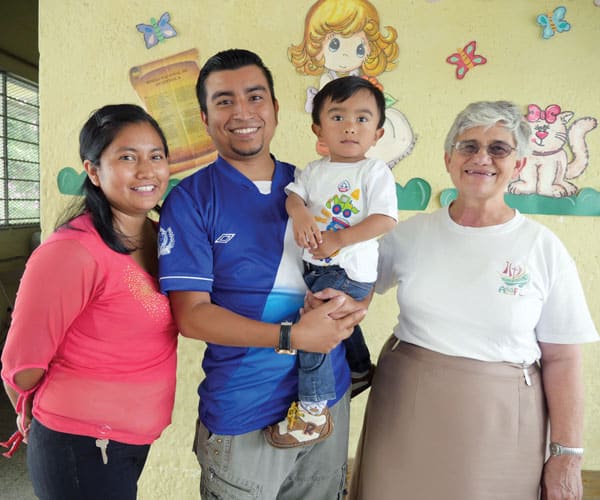 Caminando today has close to 80 participants, for whom the house is a sanctuary from the dangers of the street. Children of all ages come four days a week for tutoring, or in many cases to receive their only schooling, and enjoy a hearty meal cooked on the premises. They hold daily prayer sessions and a holy hour every Friday.

Covey says two dozen students are supported financially, some by sponsors in the States, to attend school. Another four are going to university. For children whose parents can’t even afford the books, pencils and uniforms required to attend the otherwise free state schools, the Caminando program may be their only chance at an education.

“I give supplementary lessons to the adolescents who attend our morning sessions, while a qualified teacher often comes in the afternoons to instruct the younger ones,” says Carlos Miranda, the current president of Caminando. Miranda is one of the lucky few who were put through university. Now he is paying back the opportunity by helping lead Caminando and by tutoring older children.

Miranda and his Guatemalan wife, Karla, and their 2-year-old son Andry, stay in one of the cubby-hole bedrooms in the house. Karla is also attending university.

“Everyone at the house, except Andry, is in school,” Covey says. “Father Tom taught that education is the window to a better future and their schooling is the reward for their program participation.” He says the work Caminando does also has a positive influence on other local youth in the neighborhood, helping them to learn “to be the people they want to be.”

Father Goekler, no doubt watching from on high, would be very happy. 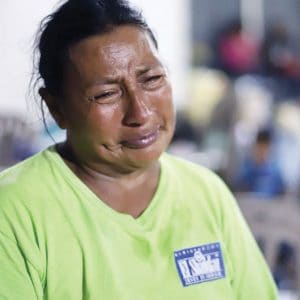 Sorrowing Catholics have two models to inspire them: Jesus suffering on the cross and Mary standing at the foot of the cross || As...