For over a decade, the nonprofit organization Human Rights and Environment (known by its Spanish acronym DHUMA) has combined education and legal aid to defend the rights of Quechua and Aymara peoples of Puno in southern Peru.

“We hope that their rights will not only be recognized, but actually respected and enforced in the country,” says Maryknoll Sister Patricia Ryan, 72, a founder and current president of the organization, which is supported by both the Maryknoll Sisters and Maryknoll Fathers and Brothers.

This year, DHUMA has received the Institute for Policy Studies’ international Letelier-Moffitt Human Rights Award, named after human rights activists assassinated in Washington, D.C., as victims of the Pinochet regime in Chile.

Although her team celebrates the award, Sister Ryan says their real reward is in the success DHUMA has achieved in empowering the indigenous people of Puno to defend their rights to clean water, a healthy environment and their way of life. Recent examples include two landmark rulings upholding the right of Quechua and Aymara communities to be consulted before the government can grant mining concessions in their territories. 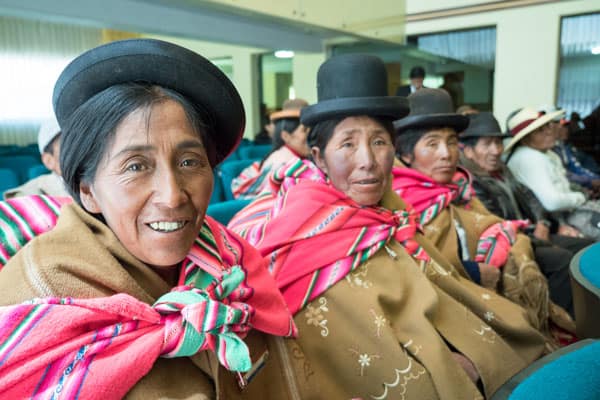 Aymara women in the altiplano of southern Peru participate in a workshop on protecting the environment in Puno, Peru. (N. Sprague/Peru)

Peruvian law and international treaties like the International Labor Organization Convention 169, which Peru ratified in 1994, guarantee these rights. But, Sister Ryan says, they are often ignored.

“The government office just goes ahead and they approve the request to have the mining claim without recognizing that this land is home to the people. It is the source of their livelihood and sustenance,” Sister Ryan says. “(Communities) were never informed that mining claims have been made in their territories, and they certainly never gave their consent.”

These mining concessions overlap with lands where indigenous families have lived for generations, including their rivers, their fields and often sites they consider sacred. The missioner adds that, not consulting the indigenous communities whose health and livelihood might be affected by the mining claims “renders these communities invisible.”

The issue of mining claims coupled with the concerns ancestral communities have over serious water contamination as a result of sewage and industrial pollution and irresponsible mining in the region have led to protests and socio-environmental conflicts, Sister Ryan says. Recent reports show that Puno is one of the regions of Peru with the most conflicts over environmental issues.

Some Aymara and Quechua communities in Puno, empowered by DHUMA, have been taking non-violent legal steps to make known their concerns. “Learning about the laws and how institutions can assert their rights is their armor,” says José Bayardo Chata Pacoricona, one of DHUMA’s lawyers. “They can take ownership of their case and can be the main actors in the defense of their rights.” 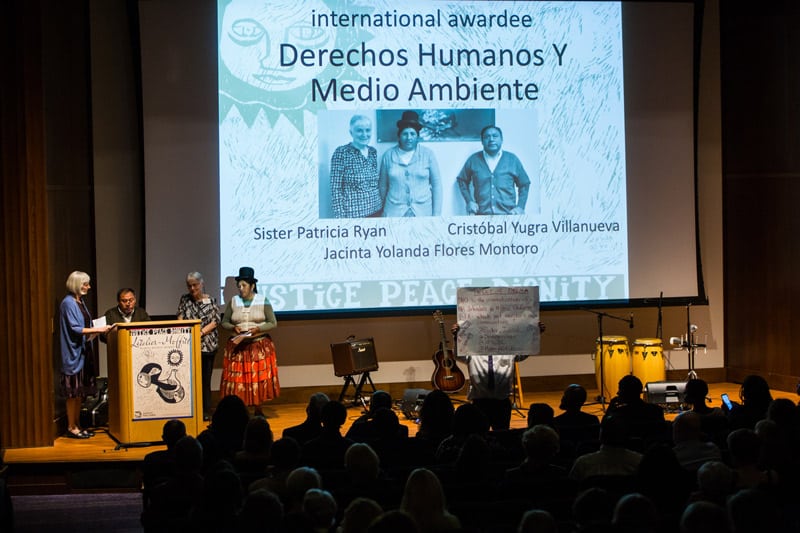 This October, the DHUMA team was the international recipient of the Letelier-Moffitt award. (Photo courtesy of the Institute for Policy Studies/Photography by Lancer Photography @kaz_tography)

In 2016, for example, Aymara and Quechua leaders accompanied their DHUMA lawyers to a court hearing in the capital of Puno, after they found out their land had been concessioned without their knowledge. “We asked the government to recognize us as ancestral communities and to respect our rights as citizens, as humans, as holders of the land,” said Laureano Apaza, an Aymara leader from Chila Pucara. “We live off the agriculture and husbandry so for us this land is worth more than gold.”

Eleven Quechua communities in Atuncolla also sought legal recourse because they found out that nearly 100 percent of their land was concessioned. Later that year, the court ruled in favor of these indigenous communities.

This ruling helped to pave the way for the landmark decision obtained in the case of the Aymara community of Jatucachi in December 2017, where the Third Civil Court of Puno annulled 13 previously approved mining concessions that had been obtained by international and national mining companies without consulting people living in Jatucachi. This decision also reaffirmed that the right to prior consultation must be enforced before approval can be granted for any mining concession in the country, setting a historic precedent in Peru.

“Now rural communities can use the constitutional process of protection as a mechanism to enforce their rights in similar cases,” says Sister Ryan.

After these successes, she adds, they are asking, “Where does it say that we have the right to be consulted? Would you come out to our communities and explain that to us?”

This has increased demand for another key aspect of DHUMA: education. DHUMA had to increase the number of workshops it organizes on indigenous rights and the laws that protect the indigenous communities and Mother Earth (known as Pachamama).

When their “dedication to the promotion of indigenous culture, autonomy and self-determination” was recognized at the Institute for Policy Studies in Washington, D.C., in October, Sister Ryan was proud of her team. She was also proud of the indigenous people they serve, who—now knowledgeable of their own rights—are making their voices heard.

A lifeline for migrants in Taiwan 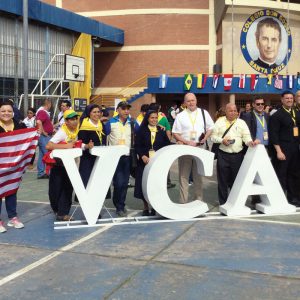