Among the many gifts Mary D’Arcy shared with her beloved Maryknoll family was her remarkable ability to be present. “When Mary sat down with you, it was as if you were the only person she had ever worked with, or even, the only one in the world!” says Sam Stanton, former director of the Maryknoll Lay Missioners.

Mary served as staff psychologist for MKLM from 1976 to 2004 and after her retirement, volunteered her services.

She died on Aug. 2, 2017, but her contributions to mission are not forgotten.

After completing a bachelor’s degree in education from Maryknoll Teachers College, Mary spent 11 years as a missioner in Peru and Bolivia. Returning to the United States, she earned a master’s degree in psychology from Fordham University.

Eventually she left the Maryknoll Sisters and married Paul D’Arcy, a former Maryknoll priest. They had a loving marriage and raised two sons.

Mary maintained a lifelong connection to the Maryknoll Sisters through the Congregation’s “Full Circle” association for former members. She also belonged to the Maryknoll Affiliates’ Subway Chapter in New York City.

As a psychologist with MKLM, she was adept at family dynamics, says her friend and co-worker Teresa McGee, adding, “She could assess a person’s gifts and vulnerabilities for mission placements.”

Recalling Mary’s skills as a group facilitator, McGee says, “No matter how complex an issue might be, Mary broke it down into manageable pieces, and helped others do the same.”

But perhaps McGee sums up Mary’s greatest gift to Maryknoll in these words: “Mary had a huge heart that held all of our stories as a sacred trust.”

Deirdre Cornell
Deirdre Cornell is a former Maryknoll lay missioner who served in Mexico. She is author of three Orbis Books, including Jesus Was a Migrant and American Madonna: Crossing Borders with the Virgin Mary.

Spirit of Mission: The Greatest Story Ever Lived 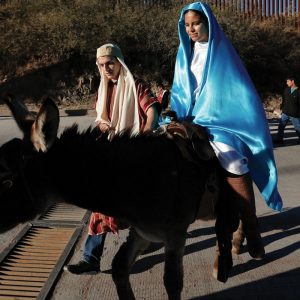 Spirit of Mission: The Greatest Story Ever Lived

Christmas calls us to celebrate God at work in everyday events of human life || A young woman, Mary, engaged to marry,...