Tears of a mother on the U.S.-Mexico border

“Please, my son needs me! I have never been separated from him. I beg you to help me. I’m not lying. I am here because of fear. I am desperate. I can’t go back to my country because my son and I are in danger.” This is the letter Maria Herlinda from Honduras sent to the Columban Mission Center while she was held in a detention center in El Paso, Texas.

“I need someone to talk and listen to me. I can’t live in my country. I am afraid of the murderers of my husband. The only other place I could go was to my sister’s house, but someone abused me there. I am scared!” her message continued. “I ask for your help and blessings. I know a family from my country that belongs to my parish; they live in New Jersey and are willing to take me in.”

Maria was among the more than 2,300 parents separated from their children after they illegally crossed the U.S.-Mexico border following the implementation in April of the U.S. government’s zero-tolerance policy on illegal immigration. (Immense public political pressure ended the separations on June 20 but not the policy.) 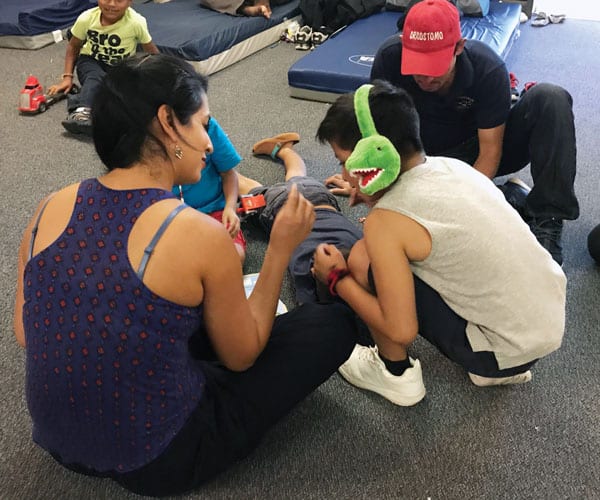 When Father Robert Mosher, director of the Columban Mission Center, received Maria’s letter, he welcomed the opportunity to be of service to a person suffering because of this policy. “I thought it was important to be a witness to how this affects people and wanted to make sure this person knew there are people who were concerned with her case,” he says.

Father Mosher, a member of the Columban Fathers who has served in El Paso since 2011, visited this mother whose 9-year-old son, Alex David, had been sent to a care facility for unaccompanied minors in New York. “There’s no greater pain,” Maria told Father Mosher as tears streamed down her face, “than to be apart from your child.”

“That kind of human tragedy is so moving, and the effect on the children is even worse, but the parents’ experience is trauma too,” says Father Mosher, who partners with the Maryknoll Fathers and Brothers to take U.S. Catholics on short-term mission trips to the U.S.-Mexico border to hear stories like Maria’s and meet other migrants. He says he hopes participants will begin to see things in a new way and hear what God is telling them to do. 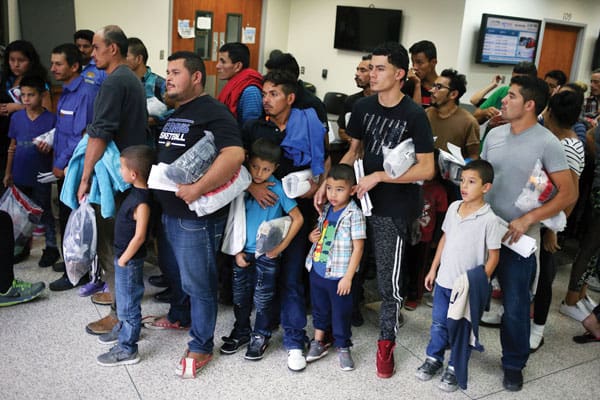 Immigrants released from detention in McAllen,Texas, are reunited with their children but these families face a future of ongoing fear and uncertainty. (CNS/L. Elliott, Reuters/U.S.)

Deacon Kevin McCarthy, a Maryknoll mission educator, joined Father Mosher in leading a group of 10 participants to the border this summer as the federal government was reuniting thousands of separated children with their parents just days before the July 26 deadline.

“For the most part the parents were interacting with us, but the kids were different. You could feel the apprehension and their worry,” says McCarthy, explaining that participants spent time assisting newly reunited families at Loretto-Nazareth Migrant Center, a temporary shelter in El Paso run by the Sisters of Loretto.

McCarthy emphasizes that as Christians, we are called to embrace the stranger. “Jesus, Mary and Joseph were refugees and fled for their lives,” he says. “These families in many cases are fleeing for their lives too. Our call is to welcome, provide shelter and refuge for those most in need.”

Gerry Lee, a trip participant and executive director of the Maryknoll Office for Global Concerns (MOGC), says encountering the reunified families was bittersweet. “It was wonderful to see them reunited,” he says, “but it was also painful.”

Lee recalls meeting one father from Guatemala and his 10-year-old daughter from whom he had been separated for three weeks. While the father could talk about his experience, the daughter never smiled or cried. She was completely expressionless during the whole conversation, Lee says and adds, “It was really obvious that she was deeply upset.” 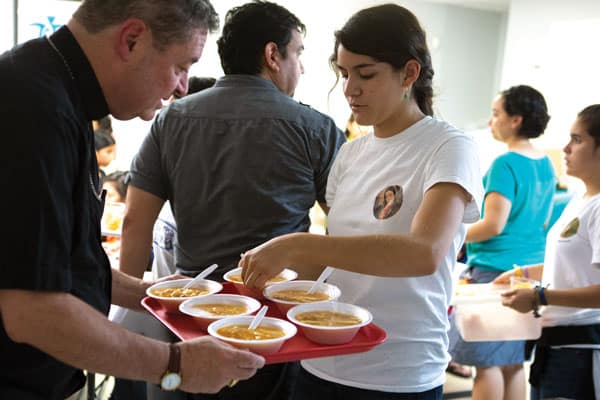 The heartbreaking moment for Lee came when he heard another little girl say to her father, “I will be good; I will be good! Don’t leave me again,” because she felt she had done something wrong that caused her father to leave her. “Oh my God, how can they understand?” Lee says in a voice choked with emotion.

Maryknoll Sister Lelia Mattingly, who volunteers at various migrant shelters in El Paso, further testifies to the traumatized children she has met and tried to comfort. “I noticed the children who had been detained were kind of quiet and very solemn,” she says. “They were not running around like the kids from other times. Kids who had not been detained are playing, running around and are not afraid to play alone.”

Father Mosher and advocacy groups from El Paso report that in addition to separating families, CBP (Customs and Border Protection) officers were stopping asylum seekers at ports of entry all along the U.S.-Mexico border and asking them to go back and come back another day or try another border of entry because they were too crowded to receive them.

“We suspected that they actually did have the capacity but wanted to discourage people who were asking for amnesty by refusing to allow them to come into the United States and hoping that they would get tired and eventually go away and go back to their countries,” Father Mosher says. “In fact, it is against international and national laws to turn people back.”

According to the Hope Border Institute, as of August there were at least 410 cases of ongoing family separations involving parents who have already been deported and 68 cases of parents who are within the United States but have not been located. There are approximately 200 parents who have been either deemed “ineligible” for reunification or the government claims “waived” their rights to reunification. 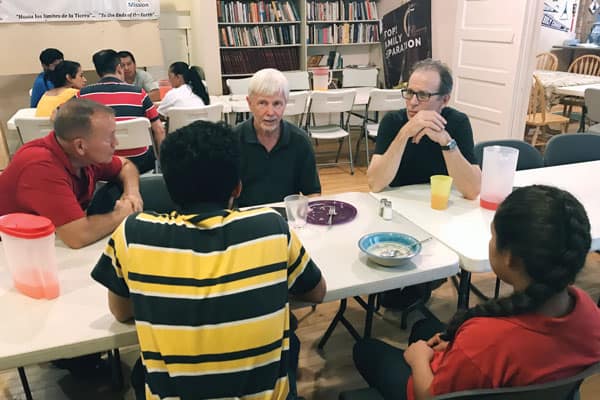 On immersion trip (l. to r.) Chuck Peabody, Scott Wright and Gerry Lee talk with an immigrant and his daughter reunited at Annunciation House in El Paso. (D. Kelly/U.S.)

Meanwhile MOGC, a joint office of the Maryknoll Fathers and Brothers, Maryknoll Sisters and Maryknoll Lay Missioners, has issued this statement:

“To criminalize those who come seeking asylum, to escalate their trauma in terms of detention and confinement, and to routinely separate children from their parents is extreme, inhumane and contrary to our core Christian values to welcome the stranger and safeguard the sanctity of the family.”

MOGC staff members and supporters have joined demonstrations and public prayer vigils calling on the U.S. government to seek more just and humane solutions to the immigration crisis and to address the root causes of migration from Central America, including violence, corruption and impunity.

As for Maria, advocacy organizations in El Paso helped her find a lawyer and after more than two months, she was transferred to New York and reunited with her son. A judge from El Paso has allowed her to stay in the United States and await her day in court to request asylum with the family she knows in New Jersey.

“Maria, a woman with a lot of faith, was grateful to have me and other advocacy groups on her side,” says Father Mosher. “People often don’t understand what resources are available to them. Just by being a human being asking for asylum, they already have certain rights that are guaranteed by our constitution.”

Featured Image: Anita Areli Ramirez Mejia, an asylum seeker from Honduras, is reunited last summer with her son Jenri, 6, after being separated at the U.S.-Mexico border. (CNS/L. Elliott. Reuters/U.S.) 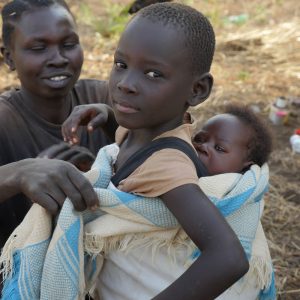 A Salesian priest sees the plight of Jesus, Mary and Joseph reflected in South Sudanese refugees in Uganda today || Christmas...

Nov 1, 2018
Copyright 2020 Maryknoll Fathers and Brothers. All Right Reserved.
Back to top