In Venezuela, I lived in barrio Nueva Tacagua. One of my neighbors was an elderly woman named America Lopez, who lived in a one-room shack with her daughter and three grandchildren. People called America La Loca, “the crazy one,” because she often acted out of touch with reality.

One day, the late Maryknoll Lay Missioner Jim Sweeney came to our pastoral team to request help for America. We asked the Sisters of Charity in Caracas, who ran a home for the elderly and needy, if they could care for America. They did. After several weeks, Jim and I went to visit her. America wore a clean dress, had her hair combed, and her hollow cheeks were filling out. She asked about her daughter and grandchildren and expressed ideas on how to raise children. With a big toothless smile, she said, “I am going to the dentist to get new teeth!” With the right food and care, La Loca emerged as a sound person with keen insights. With so many people in need today, the story of America Lopez answers the question, “Where does one begin?” The answer: with one person at a time.
Leo Shea, M.M.

With a group of Salvadorans, my husband Erik and I climbed onto an old school bus for an all-day pilgrimage to Esquipulas, Guatemala. The basilica there hosts a black Christ and is the most frequently visited shrine in Central America. People, many in native attire, wait in line for hours to file past the huge crucifix, to which miraculous healings have been attributed. Holding lit candles, the pious faithful process on their knees the whole way to the shrine behind the altar. Benedictines, who oversee the care of this sacred place, offer a warm welcome to all. It was a day to be remembered.
Margo Cambier, MKLM

One day, as I was giving a lesson in a school in the altiplano of Peru, an area more than 12,000 feet above sea level, all of a sudden, there was a thundering noise! It sounded almost like machine gunfire on the tin roof. Every student jumped up and ran outside, some across the tops of the desks, shouting granizos, which meant nothing to me at that time.

They ran into the potato fields that surrounded the school, taking off their shawls and ponchos. They quickly spread these on top of the potato plants that were in flower, which I was told indicated harvest time was near. I discovered later that granizos means hailstones, which would have hit the flowers and knocked them off the plants, ruining the harvest. In this one-crop economy—potatoes—students were saving their food for the year. I added granizo to my vocabulary and learned something about potatoes.
Helen Phillips, M.M.

The day after the canonization of Saint Oscar Romero in Rome on Oct. 14, 2018, the Bishops Catholic Conference of El Salvador celebrated a Mass of thanksgiving at the Vatican for the Salvadoran community that had come to the canonization. We were told that right after the Mass the Holy Father would give an audience to the community.

I got a spot where I knew the Holy Father would come through. Right behind me was Jesuit Father Jon Sobrino. He was the only Jesuit teacher at Central American University in San Salvador, the capital of El Salvador, who was not killed by soldiers on Nov. 16, 1989, for defending the poor during the Salvadoran civil war. Father Sobrino was out of the country the night his six fellow Jesuits and their cook and her daughter were murdered.

As Pope Francis entered the hall and came down the main corridor, I was afraid he might miss Father Sobrino. I began to shout in Spanish, “Jon Sobrino is here! Jon Sobrino! Jon Sobrino!”

The Holy Father looked at me. I pointed to Father Sobrino. The pope came over and greeted him and they talked. Those of us standing there also got to greet the Holy Father. In doing a good deed, I was given the blessing to touch and talk with Pope Francis at the thanksgiving Mass for the canonization of the archbishop of my homeland.
Roberto Rodriguez, M.M. 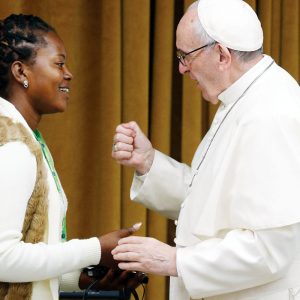 Church’s openness to listen to young people signals they are considered a priority || When Pope Francis goes to Panama...