Yuyu, a tall young woman wearing the traditional dress of the Watatulu people of Tanzania and cradling an infant in her arms, had dreams.

A few years ago, Yuyu was living and studying in an all-girls school, where she had running tap water, a comfortable bed, decent food and was learning English, a required language in Tanzania for those planning to finish high school and perhaps attend college. She was a good student.

Then, overnight, her dreams were shattered. 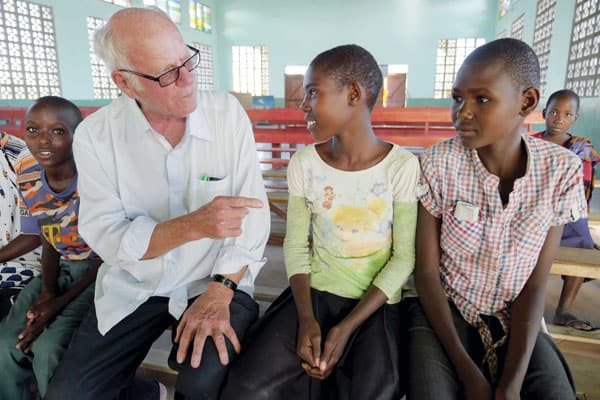 Father Schoellmann chats with children in the church he built in Bukundi, Tanzania.

“She was yanked out of school into a forced marriage,” says Maryknoll Father Edward Schoellmann, who explains that Yuyu’s dowry meant wealth in the form of cows paid to her father by her husband’s family. “For all practical purposes, her father pulled her out, got his dowry, shipped her off and that was it.”

It fell to Father Schoellmann to counsel the young woman, who struggled emotionally after her marriage.

“She was going to school and all of a sudden someone takes her out and she’s put into a mud house, she has to go five miles for water, find firewood, take care of kids and everything like that and it was just a complete shock to her life,” says Father Schoellmann, pastor of the church in Bukundi in the Diocese of Shinyanga.

He could do nothing to undo what had happened, but was able to support Yuyu emotionally as she adjusted to life with a husband and two young children.

Yet, Father Schoellmann hasn’t given up on helping young Watatulu women like Yuyu and other young people to pursue their dreams of learning. 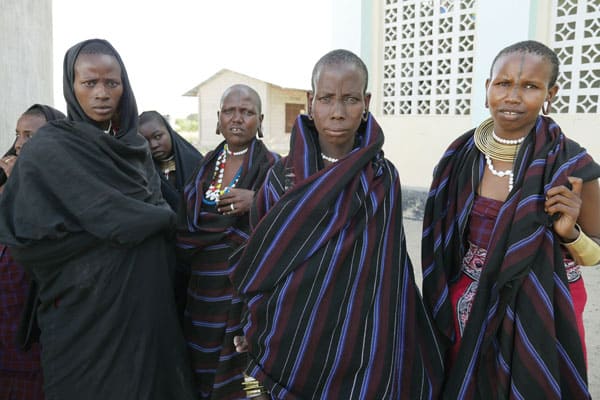 At the large compound that he has built in Bukundi, the center of a “future parish” that also has five outstations or chapels across a large stretch of bushland, he supports several education programs, ranging from a preschool and feeding program for the little ones to providing housing and schooling for teenage students.

The 81-year-old missioner from rural Nada, Texas, had a modest plan in 2006 when he came to the isolated Bukundi, about a day’s drive from the southern shore of Lake Victoria, much of it over dirt roads. He had previously worked in another area of Tanzania before doing mission stints in Ethiopia, Russia and on mission promotion in the States. “I figured I would live in a local house and have a local church and everything like that, but then things began to develop,” he says.

“Bukundi is a town that keeps growing,” he says. “If you went around, you would see 60 houses in various stages of being built, which means it continues to grow, so I said, ‘It’s going to need a big church.’ ”

Relying on funds from the Maryknoll Fathers and Brothers and direct donations from personal supporters, Father Schoellmann has built a compound with seven buildings of varying sizes, including a large church, houses for some of the parish staff, dormitories for students, a cookhouse, and a “seminar house” with classrooms and meeting spaces as well as four bedrooms.

He’s hoping to get an order of African sisters to come and live in the “seminar house” to teach the secondary school students on the compound. 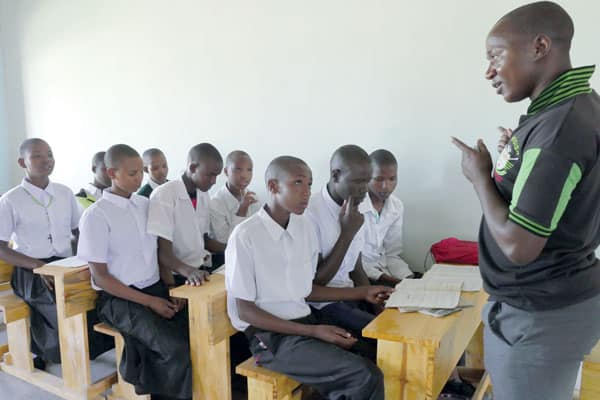 In addition to his sacramental ministry at the Bukundi church and the outstations, and the ad hoc education programs he has started, Father Schoellmann is constantly responding to local crises, from driving people for emergency medical treatment in a larger town an hour away to helping feed the hungry during droughts. Of particular concern are the Watatulu, a semi-nomadic herding people who regularly appear at the Bukundi compound looking for food.

“I’m getting a lot more people coming in now because there is so little food,” he says. “The famine here is bad because for two years there were no rains.”

The missioner has developed a voucher program whereby he gives the needy a slip of paper that they take to a local merchant who gives the people grain. “He gives me the slips and I pay him,” the Maryknoller says.

At times Father Schoellmann appears overwhelmed by the pleas from the hungry Watatulu. The missioner says that when he started trying to help feed people a few years ago, he had 30 people show up for food the first day. “The next day we had about 400. So, I was ‘eaten up.’ I tried to stop it and I said ‘no more, we can’t,’ but they continue to come,” he says. “You know when people haven’t got anything, it’s hard … so you give them what you have when you have it.”

He compares the dozens, and at times hundreds, of people coming to his door for food to refugees. 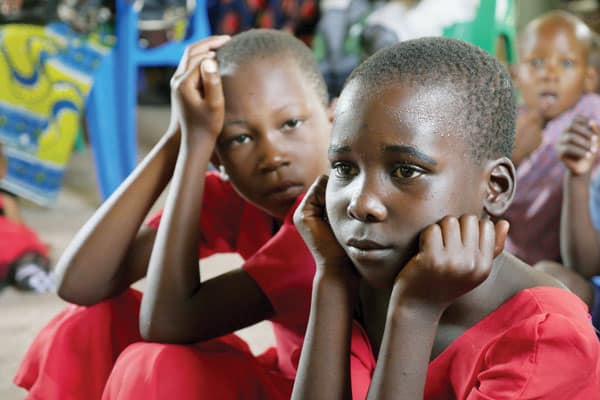 The Watatulu are particularly hard hit by the famine, he says, because as pastoralists they depend on grazing goats and cattle, but have been pushed to the most marginal land in the foothills as farming people cordon off land for crops. Some Watatulu are trying to learn to cultivate, but they lack land, farming equipment and even basic knowledge of farming, such as where to get seed. “Most of the tribes will recover, but I’m worried about the Watatulu, because they haven’t got hoes to cultivate when the rain comes and they haven’t got crops, so I’m afraid it’s going to be a chronic problem,” he says.

Meanwhile, he tries to respond to those also clamoring for education. Just as women with children come looking for food, young people show up looking for a chance to study. Like Yuyu, these youths live on the cusp between the world of their ancestors and the contemporary world pushing in on them.

Father Schoellmann has two groups of teenagers living on the compound. A dozen or so live in a house originally built for a catechist and attend the local public high school. They come mainly from Tanzania’s dominant Sukuma people, who are agriculturalists, but they live too far away to walk to school every day. “The parents technically are supposed to take care of them, but I know I’m going to end up feeding them,” he says wryly.

Another eight to 10 students, boys and girls, are mainly Watatulu who are working with a Watatulu teacher toward earning a certificate equivalent to a high school degree—Tanzania’s version of the General Education Development diploma, or GED, in the United States. Because of the sporadic elementary education in their rural villages, these students were unable to qualify for secondary school. 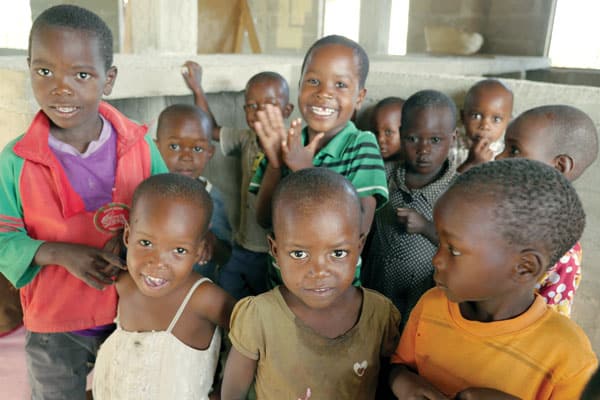 Children at Bukundi church, where there is a nursery school and feeding program.

Among these students is Usuriga, who also uses her baptismal name of Mary. At age 16, she is about the same age Yuyu was when she was pulled out of school and married off. Mary is one of the oldest of the group and Father Schoellmann says “she looks after them like a bigger sister.”

Mary says her life in her village was “every day keeping animals” with her father, his two wives and her eight siblings and half siblings. She now studies history, biology, Swahili and English, and dreams of being a nun, or a doctor, or an engineer.

Father Schoellmann says Mary is of marriageable age and if she were not studying in Bukundi, she too would probably be married off within the year. He and the other adults on the compound, standing in for parents, try to keep a close eye on the students, who are there because their families—or at least someone in their family—wants them to have opportunities not available to most Watatulu and other pastoralist children.

As for Yuyu, whose sister-in-law works on the compound, she still visits regularly, sometimes coming to Mass with an infant in her arms. Father Schoellmann says she married into a good family, and she tells the priest that her husband is respectful toward her and very good to her.

Still, the missioner, who has become a father figure to Yuyu, recognizes the sadness in her eyes when she meets to talk with him.

Featured Image: A Watatulu woman and her child attend Sunday Mass at the church in Bukundi, Tanzania. 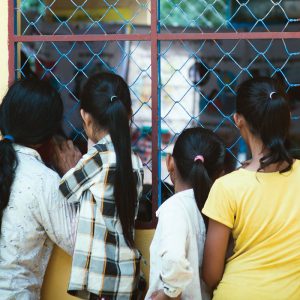 Jan 1, 2019
Copyright 2020 Maryknoll Fathers and Brothers. All Right Reserved.
Back to top