John Siyumbu was 13 years old when he, his two sisters and some 80 other young people received the sacrament of confirmation; and he felt the missionary call of Jesus: “Go out to the whole world; proclaim the Good News” (Mark 16:16).

That June 6, 1998, the Church of St. Mary Magdalene in the village of Kimatuni in Kenya was filled with families accompanying the youth being confirmed. Monsignor Emmanuel Okombo, who presided at the ceremony in the absence of the bishop, asked the parents to educate their children in such a way that the Church could have priests and religious sisters to serve the people of God.

“Vocations are nurtured in the family,” said Monsignor Okombo.

Siyumbu recalls turning to his mother, standing behind him, and saying: “Mama, nataka kuwa padri” (Mom, I want to be a priest).

Years went by and young Siyumbu entered Kenyatta University in Nairobi, Kenya, to pursue a career in education. There he met the university chaplain, Maryknoll Father Lance Nadeau. 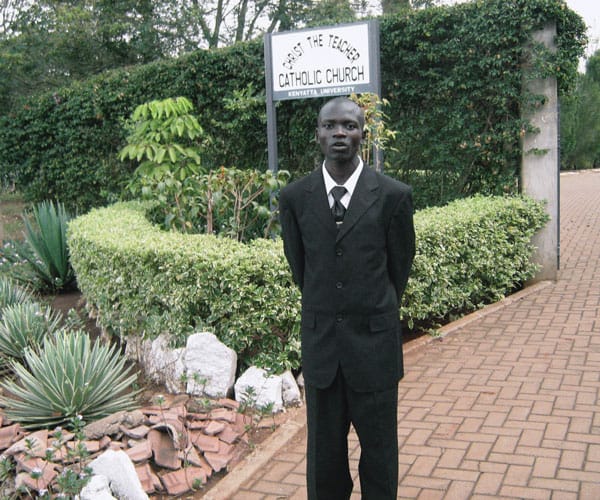 As a student at Kenyatta University, Siyumbu was attracted to Maryknoll. (Courtesy of J. Siyumbu/Kenya)

The young man joined the Catholic community on the university campus and, through Father Nadeau, met other Maryknoll missioners in East Africa.

Father Nadeau describes Siyumbu through a decision the young man made regarding his required teaching practice. “He chose to do it in Thika, the geographical heartland of the Kikuyu, an ethnic group that historically has had a very tense relationship with his own Luhya community,” says Father Nadeau. “John wanted to challenge his own prejudices through living with the traditional adversary. He was open to change.”

With a population of about 50 million people, Kenya has some 50 ethnic communities speaking 69 languages.

“I spent three months in Thika,” Siyumbu says. “At first, I felt insecure, but I was able to get to know and integrate myself with this community.”

Close to completing his undergraduate studies, Siyumbu told Father Nadeau of his desire to become a priest.

“Have you told your parents?” asked Father Nadeau.

When Siyumbu called them, his mother reminded him what he told her on his confirmation day.

“My mother had kept my desire to become a priest in her heart for all those years,” says Siyumbu. “That strengthened my desire to join Maryknoll and follow a vocation to missionary priesthood.”

Although the Maryknoll Society was founded to train U.S. priests and brothers for mission overseas, it has begun to accept vocations from other countries, where men like John Siyumbu, who have come to know Maryknoll missioners, also feel called to serve beyond their own borders.

Siyumbu’s parents, two sisters and three brothers supported his vocation, but when it came time for him to apply for a visa to the United States, his mother, reluctant to see him leave, talked to him about his friend: “Look at Vincent,” she said. “He’s a missionary priest and he’s here.”

But the mission model her son saw in Father Nadeau was like a seed growing in his heart.

“I wanted to be a priest like my chaplain at Kenyatta University,” he says. “Through his priesthood Father Nadeau showed me that following Jesus was attractive.”

Siyumbu flew out of Africa for the first time in February 2017 and arrived in Chicago, where he began his training as a seminarian, and in December that year he left for the two-year Overseas Training Program Maryknoll has in Bolivia for priest and brother candidates.

“I am studying Spanish for the purpose of mission, having cross-cultural experiences and carrying out pastoral activities,” says Siyumbu. “The hospitality of the Bolivian people has been enormous and also their patience when I struggle with the language.” 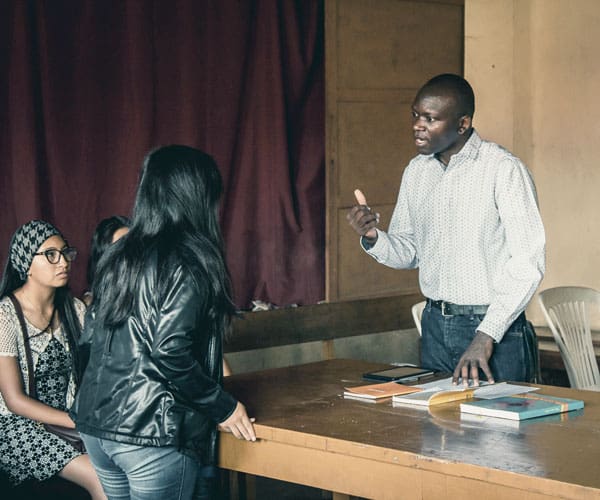 Siyumbu is now sharing his faith in Bolivia (above) during his two-year Overseas Training Program. (C. Salinas/Bolivia)

His training includes visiting the homebound, helping to transcribe books for the visually challenged, sharing theological reflections with Maryknoll volunteers in Bolivia, participating in biblical readings with a small Christian community and tutoring children. He has also taken on the direction of a confirmation program at Saint Pius X parish in Cochabamba, where he serves.

Siyumbu says he finds Jesus in people like Maria Luisa, a parishioner at Saint Pius X with whom he visits the homebound. She is, he says, one of those who proclaim with their lives the words of the Gloria, “peace to people of good will.” A woman they visit, Doña Balbina, is another.

“Doña Balbina was in bed after surgery and welcomed us with such pleasure that I felt it was she who was preaching to us the joy of the Gospel,” Siyumbu says.

In such moments, Siyumbu says, he is learning lessons of God through another culture, and through Maryknoll he is learning to love and serve people. “Mission is a transformation based on the Gospel that Jesus continues to preach to us and make alive in each one of us every day, wherever we are in this world,” he says.

After completing his overseas training, Siyumbu will return to the United States for six years of theological studies before being ordained a priest. 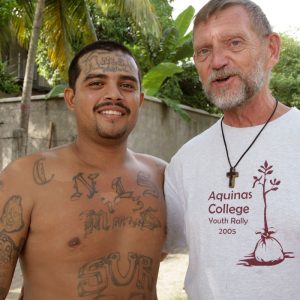 Recalling the gangland barrio from which migrants flee || The names of the places jumped out at me as I read articles...