" /> Father Mullan champions the rights of Mayan people in Guatemala

Father Bill Mullan and his young driver pull up in a 4×4 at the dirt-floored wooden chapel of Limon, El Remate, a Mayan village in the Petén region of Guatemala. The Maryknoll missioner from Brooklyn, N.Y., has come to celebrate Sunday Mass in the Q’eqchi’ language, as he has done countless times before. Villagers arrive: women in embroidered blouses and hand-woven skirts, babies carried in shawls, men dressed in their best, if shabby, Western-style clothes, children playing on the wooden pews—all waiting for the Mass to begin. A scrawny dog strolls through while a couple of altar servers help Father Bill put on his white alb and colorful stole.

A threesome choir and badly tuned guitar start to crank out hymns of praise. Then a village elder swings a thurible around the simple table of an altar, oozing dense smoke from the burning resin of an indigenous pine tree. Father Bill steadies himself against the lectern while studying passages in the Q’eqchi’ Bible before beginning the Mass. He coughs slightly as he is enveloped in a cloud of incense. Aside, he says his doctor is always telling him to stop smoking, but he doesn’t smoke. “The people smoke me,” Father Bill jokes, explaining his cough results from years of breathing excessive incense at Mayan village Masses!

The missioner has lived among the Mayan Indians on and off for more than 35 years since first setting foot in Guatemala in 1962. He was there witnessing the genocide of the 1980s when the army massacred thousands of indigenous as well as Catholic religious, whom the wealthy elite of such an unequal society feared would become revolutionary guerrillas, and then in the good times of peace and reconciliation that followed.

His love for the Mayans and their strong faith is plain to see. As a photojournalist, I have had the privilege of documenting his service to the people of Guatemala more than once. 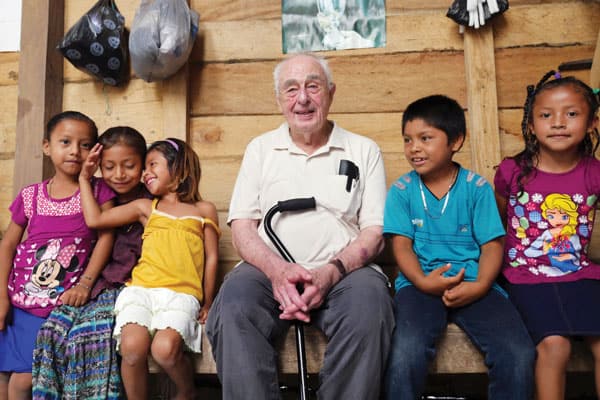 After celebrating Sunday Mass in El Remate village, Father Bill Mullan enjoys chatting with the children in their Q’eqchi’ language, which he has mastered over the years. (Sean Sprague/Guatemala)

The first time was in 2001 during the week leading up to Christmas. I trekked with Father Bill, at that time a fit 67-year-old, for five rainy days through the Petén jungle of San Luis, ankle deep in mud while a mule carried our belongings. He celebrated Mass in Q’eqchi’ nine times in nine villages, day and night. After feasting on chicken soup, claws and all, we slept in the churches, making our “beds” from a couple of pews pulled together, draped with mosquito nets! What struck me was the solemnity and beauty of the Mass, a blend of Catholicism with spiritual practices that predate the Church’s arrival in the region by many centuries.

Father Bill explains how the Mayans prepare for the church ceremonies: “The elders go to the jungles to collect sap from special trees for the incense, and special wax from special bees to make special candles for the feast, and then they play sacred music with flute, marimbas and drums.”

He jokes about bringing his local bishop, an Italian whom he considered to be a very good man but lacking experience among the Mayans, to such a celebration and how shocked the bishop was observing some of the Q’eqchi’ customs at Mass.

“After the Mass,” Father Bill recalls, “the bishop said, ‘Did you notice the lady who put a bowl of chicken soup in front of the tabernacle? That was awful!’ So I replied, ‘Bishop, if they put a flower there, what would that mean?’ ”

Explaining why chicken soup is such an expression of faith for these people, Father Bill says, “Thanking God, the Creator, they are praying with all their hearts and offering this food, which is so precious for their own lives and for their children. … It’s the way they express themselves and there’s nothing wrong with that. In fact, it’s beautiful!” 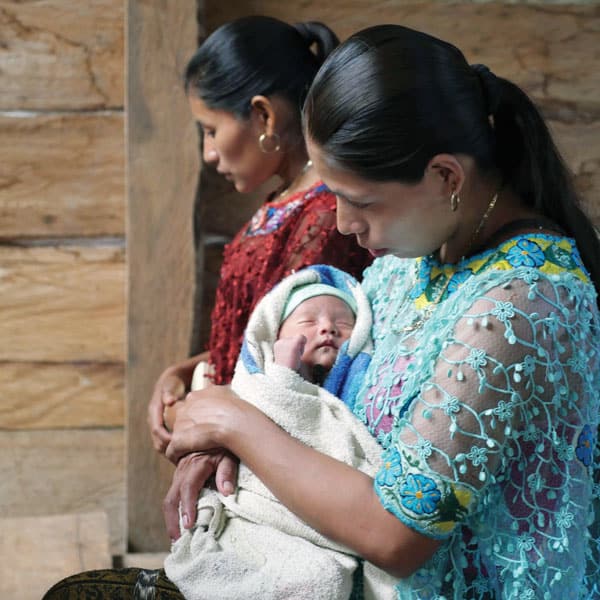 Wearing her native dress, a Mayan villager cradles her infant as she prays at Mass. (Sean Sprague/Guatemala)

When Father Bill Mullan first arrived in Guatemala, he didn’t speak Spanish very well, let alone the difficult Mayan languages, of which there are many, but in time he became an expert linguist, able to celebrate Mass and converse in several dialects.

“I remember going up this steep dirt road through the mountains,” he says, recalling his start. “The bishop was driving and Sister Rose was with us. We get to the end of the road and there’s a horse and a mule waiting. ‘The horse is for me,’ says Sister Rose, and she encourages me to get my backside into the mule’s saddle. Off we go for four hours and people are speaking the local language. That’s when I started to study Jacalteco.” Mastering other dialects developed as he lived among the people.

Father Bill describes how some of the Mayan villages were more Catholic than others, and explains the significance for them of baptism and marriage. “In San Mateo Ixtatan at first it was about 90 percent Mayan religion and maybe 10 percent Catholic,” he says. “Now it’s changed a lot, and there are also Evangelicals. With Catholics, it wasn’t baptism that made people Catholic, because they all wanted baptism. They felt that baptism really helped a child to get a human spirit as opposed to an animal spirit, so I always baptized the child. In that community, they expressed being Catholic by being married in the Church and not necessarily by having been baptized. After I’d been in San Mateo a few years, a good number of couples were getting married in the Church, which was very satisfying for me.”

In the spirit of Bartolomé de las Casas, the 16th century Spanish missionary famous for championing the rights of indigenous people in the Americas and decrying the destruction of their culture and traditional beliefs, Father Bill has promoted the culture of the Mayans he has served for so many years. It is reassuring to see him in his mid-80s still presiding at Mass in remote Mayan villages, then joking with the locals in their own language. 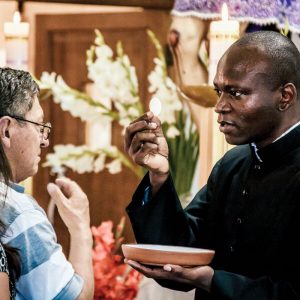 Kenyan Maryknoll seminarian learns "lessons of God" in Bolivia || John Siyumbu was 13 years old when he, his two sisters...