When I was living among the Aymara women in the Andes Mountains of Peru, it was not uncommon to see a woman walking along with her hands in constant motion. Under her arm she would have a large ball of newly shorn wool from an alpaca or sheep. In her hands she would be holding a type of wooden spindle, which was likely homemade.
She would grab a piece of the wool and wrap it around the spindle, securing it there, and then wind some wool around the spindle until it had some length. She would then lower the wool down the front of her long skirt and begin a motion with her hands—left to right, right to left—and the spindle would go on wrapping the new wool.
After having walked a distance, she would have a large skein of knitting yarn all ready for her to make into a sweater or blanket or poncho or whatever she wanted. The woman would stop along the way to do her shopping in the markets or converse with friends, continuing her spinning as she went. Such women taught me how not to waste a minute.
Helen Phillips, M.M.

On the main street through Shariatput town in Bangladesh I made a U-turn on my bicycle and, unwittingly, forced a pedestrian off the road. It was Nanny, a solitary, mentally challenged woman. She spends her days shuffling up and down the road, with a bundle in one hand and a stick in the other, eyes downcast and talking to herself. I quickly apologized for the inconvenience I had caused her. Nanny bared her teeth at me and raised her stick as if to strike. Smiling, I again apologized. Months earlier I had tried to converse with Nanny, but she would not even look at me. However, now she looked me squarely in the eye, with indignation. An apology had caused her to blossom, that is, to acknowledge another person.
Robert McCahill, M.M.

As my husband Jim and I walked to visit the women at the federal women’s prison in São Paulo, Brazil, where we were beginning our ministry as Maryknoll lay missioners, we spotted a life-sized statue of Saint James the Greater. We were surprised.
Saint James is the patron saint of Spain and, according to legend, his remains are buried there in the city of Santiago de Compostela. That city is the destination of a popular pilgrimage known as Camino de Santiago, the Way of Saint James. The statue in Brazil is a clear connection to what you’ll find on the Camino de Santiago more than 5,000 miles across the Atlantic Ocean.
That trail in Spain contains all sorts of tributes to Saint James. Just like the statue in Brazil, he is usually depicted as a pilgrim from the Middle Ages, with a long cloak, a hat, a walking stick, a gourd for his water, sandals for his feet. He will also be wearing a scallop shell, the “badge” of a pilgrim. Saint James the pilgrim carries nothing more, relying instead on the hospitality and kindness that he will find along The Way.
What was most amazing was that Jim and I had completed the Camino de Santiago exactly a year to the day that we were visiting the women at the prison. That was our first day in mission.
Our encounter with Saint James in São Paulo that day was for us an indication that our pilgrimage hadn’t ended in Spain, but that we were still on the right path.
Marilyn Kott, MKLM

One morning after liturgy, I stopped at a shopping plaza in Nairobi, Kenya, to do my shopping. I finished shopping and was returning to my car when a woman hand-in-hand with a toddler approached. She asked if I remembered her. I had to confess I did not. She reminded me that I had prayed with her that her daughter would be able to conceive a child. “This young boy is my grandson,” she told me. “I am very grateful to God and to you.”
John Conway, M.M. 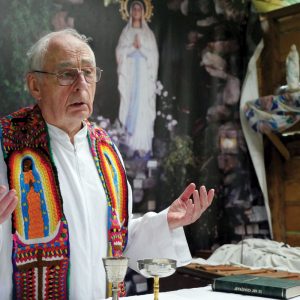