Recalling the gangland barrio from which migrants flee

The names of the places jumped out at me as I read articles over the past months about the caravans of migrants walking from Central America to the United States to seek asylum. One of the migrant caravans that include families and children started out last October from San Pedro Sula, Honduras, one of the most dangerous cities in the world. I was not at all surprised to read accounts of people in this caravan coming from San Pedro Sula’s infamous Chamelecón neighborhood. I’ve been there.

I’ve walked the dirt lanes of that gang-ridden barrio with the late Father Thomas Goekler, a priest originally from the Hartford Archdiocese who had joined Maryknoll and was then working to counter gang activity in Chamelecón. As we walked, he pointed out the homes of young men killed by rival gangs and the spots in the streets where people had been gunned down. At a vacant lot he said a house once stood where two sons who belonged to rival gangs lived. Both were murdered, and the family dismantled the house and left.

We prayed at the wake of a slain 18-year-old gang member, whose closed casket had a small glass viewing window over his face, his nostrils stuffed with cotton. Some of those at the wake snickered as we prayed. The dead youth’s older brother glared at Father Tom as the Maryknoller read the riot act to the gang members. The priest said the young men had made their choices in life but he was worried about the little children in the room. “Is this what you want? Because in a few years this is where they’re going to be,” he said, nodding toward the casket. I feared the brother might take out a gun and shoot the priest on the spot. Father Tom was unfazed and didn’t blink.

Later, he told me how the gangs regularly use gang rape for revenge and to celebrate victories and accomplishments. He’d been threatened with death and escaped crossfires.

We met one of his successes, a young man named Henry Aguilar with gang tattoos on his arms, chest and face, who had found faith and left the Mara Salvatrucha, or MS-13 gang. It was hard to imagine this friendly, warm-eyed, charismatic man doing what he must have done while in the gang.

Within a year after I returned to the States and had written about Father Tom and Henry for MARYKNOLL magazine, Father Tom called me in tears: “They killed Henry.” His former gang members had marched into Henry’s house, past his wife and child, and shot him in the shower. He had failed to help his ex-gang mates in a fight after a soccer match. Once you are in, you rarely leave alive. This was more than a decade ago. Father Tom has since passed away, blessedly in his sleep.

I have thought a lot about Chamelecón since news of the migrant caravans began last fall. As a journalist with MARYKNOLL, I’ve traveled the world. Chamelecón is one of the most dangerous places that I’ve ever been.

If I lived in Chamelecón, I would do anything to protect my children from being recruited into a gang, murdered by a gang or gang raped. Walking more than 2,000 miles to the U.S. border? You bet. Until I dropped from exhaustion and had to be carried.

Are there some people in the caravan who need to be screened by immigration and not admitted? Of course, but that does not warrant vilifying everyone and ignoring the plight of the desperate innocents. It is not illegal to seek safety through asylum.

Catholic leaders from Pope Francis to the U.S. bishops to the greater Maryknoll community have called for U.S. leaders to respond with compassion toward the migrants fleeing “violence, hunger and persecution.”

This is a humanitarian crisis, not on our southern border, but in Honduras, Guatemala and El Salvador. And it requires leadership from the United States, Mexico, Canada and Central America to find ways to address the violence and poverty of our southern neighbors so that families aren’t driven to flee their homes. They are our neighbors, and in our tradition of welcoming the tired and poor huddled masses yearning to breathe free, we can do better.

“Inspired by love, we call on the United States to act with compassion toward migrants,” Maryknoll leadership said in a joint statement responding to the caravan in November, “and to work to transform our relationship with our southern neighbors to enable livable communities to flourish everywhere,”

Working for migrants in Los Angeles 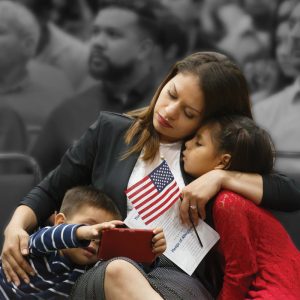 Working for migrants in Los Angeles

Former undocumented immigrant helps migrants today in Los Angeles || "What are we going to do if one of us doesn’t...

Mar 1, 2019
Copyright 2020 Maryknoll Fathers and Brothers. All Right Reserved.
Back to top