Priest reflects on how to see the Holy Spirit at work

Faced with life-changing decisions, as people of faith we’re supposed to ask the Holy Spirit for guidance. But how can we know for sure the ideas that pop into our heads are from God? Obviously, when the choice is between good and bad, there’s no contest. But what do you do when the choices are both good?

Growing up, I thought of becoming an architect, a veterinarian, an interpreter, a teacher, a priest. Career choices came and went. The priesthood idea kept coming back. I felt especially drawn to the Franciscans. After much prayer and advice from various people, I decided to apply. Only one problem: they didn’t accept me. They said I was too dependent on my parents. I thought God was calling me to the Franciscans. Now what?

I finished college and joined the Peace Corps, teaching English in Korea. While I was there, another Volunteer asked me to help teach English to Korean seminarians on Dok Cheok island. There I met Maryknoll Father Ben Zweber. He seemed so full of life—and happy. He told me about Maryknoll missioners. I was immediately attracted, but given my rejection by the Franciscans, I was gun-shy. Plus, it felt strange to join a group I hadn’t heard of before. I couldn’t sleep. I asked God for a sign, but none came. No falling star. No thunder. I prayed: “God, I’m going to apply to Maryknoll. If this is your will, help me. If not, stop me.”

A profound peace came over me and I slept like a baby. Here I am a Maryknoll priest for 40-plus years. Ah, but God wasn’t finished letting me see the Holy Spirit at work.

After serving as a missioner for 12 years in Korea, I was called back to the States to write for Maryknoll magazine and help give vocation retreats for those looking into becoming Maryknoll priests, brothers, sisters or lay missioners. Maryknoll Seminarian Pablo Talavera was helping with the retreats while he studied for the priesthood.

Among those discerning a call to lay mission was Abigail Grim. Pablo was attracted to her. Now it was Pablo’s turn to wrestle with the Holy Spirit.

Was God calling him to missionary priesthood or marriage to Abigail? On the advice of his spiritual director, Pablo went to prayer. There he found his answer. “I discovered my call to service was not necessarily a call to priesthood,” he said. He left the seminary and six months later married Abigail.

Abby’s journey with the Holy Spirit was more circuitous. Her parents had been Baptist missionaries in China. They also missioned in Germany, Kazakhstan, Malta, Saudi Arabia, Hong Kong and the United Arab Emirates. Increasingly disappointed with the Baptist church, the family eventually converted to Catholicism! Abby’s father said he and his family felt at home in the missionary spirit of Catholicism.

Abby and Pablo now have two children and still strive to respond to the call they feel to serve others. They have implemented a program in their parish to help refugees and immigrants. Some day they hope to do mission work overseas.

There you have it. People of faith struggling but always seeking God’s will for them. It’s the least—and best—we can do. 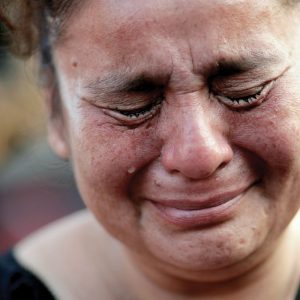 A mix of push and pull factors force people to migrate || There are about 11 million undocumented immigrants in the United...