During my first month in Shariatpur town in Bangladesh, where I visit the sick poor and often accompany them to the hospital, a woman gently turned down my invitation to take her, her husband and their disabled son to a Dhaka hospital. I later returned to see them and learn if there had been any change in the 9-year-old boy’s health. No, nothing. Kulsum, the mother, staggered out of their hut holding awkwardly the overweight, mentally challenged lad. I took some photos to show at a wheelchair-making workshop. If they can make the chair using these photos for measurements, good, because the boy cannot go to them. Kulsum is all for that plan. She lugs her son everywhere, and her back is at stake.
Robert McCahill, M.M.

A few months after beginning my ministry in El Salvador, the nonprofit organization where I worked had an overnight team-building retreat. We were divided into groups to act out a TV cartoon show. My group had “The Flintstones.”
Since my Spanish was not fluent, the group decided my role should be Dino, the pet dinosaur. As in the beginning of the show, I greeted “Fred” by yipping and jumping on him. The guy who played “Fred” was pretty large, but I ended up knocking him down, much to the delight and surprise of the audience. By enthusiastically embracing my role and making a fool of myself, I was able to be accepted as a full team member. Plus, I was voted the best actor!
Deborah Northern, MKLM

There is a wonderful grocery store on Halsted Street in the Bridgeport neighborhood of Chicago. They have very fresh fruits and vegetables at a reasonable price. Many of the shoppers are of Hispanic or Chinese descent.
I went there to buy some fruit and was following a Chinese woman to where the oranges were displayed. I heard her quietly say in Cantonese, “Ten oranges, one dollar ninety-nine, hmmm, unbelievable.”
Standing behind her, I said in Cantonese, “Yes, ten oranges, one dollar ninety-nine, and a very good price!”
The woman turned around to look at me and with a big smile exclaimed, “We can communicate! I can talk with you and you can talk with me. How wonderful!”
Then she called her friends to tell them that we could communicate with each other. They were all talking at once. One of them asked me, “What kind of a person are you?”
Replying in Cantonese, I told them that I was Sister MaryLou, a Maryknoll sister and a missionary. They replied, “Oh, you are that kind of a person!”
I did not ask what they meant by “that kind of a person.” I just know there were a number of us who parted that day with big smiles and as new friends. What a blessing to be able to communicate in so many ways, wherever we find ourselves, in whatever language we may speak and especially in the language of love.
MaryLou A. Rajdl, M.M.

In the fall of 2017 I gave an “African Show and Tell” in the third-grade class of my grandniece, Cate Healey, in Packer School in Brooklyn, N.Y. I used material from my years of mission in Africa.
We had a lot of participation and interaction by the girls and boys to my presentation, which included: African storytelling, a clapping song, finding African countries on a spinning globe, an imaginary meeting with a Tanzanian girl and boy in the third grade, learning a few words in the local African language of Swahili, a hands-on display of African crafts and trinkets and so on. I gave out small pieces of fair trade African chocolate from Ghana to each girl and boy.
This year I asked Cate if her classmates remembered anything about my class on Africa. She said the only thing they remember is the chocolate.
Joseph Healey, M.M.

Pope Tells World Youth: You Are 'the Now of God' 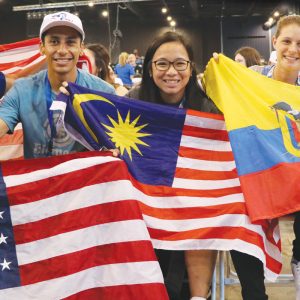 Pope Tells World Youth: You Are 'the Now of God'

Young people at World Youth Day encouraged to say "yes" to the Lord's call || As the sun rose above a field filled...