A mix of push and pull factors force people to migrate

There are about 11 million undocumented immigrants in the United States. Many of them live in families with mixed immigration status, that is, with some family members who are legal residents or citizens. Undocumented immigrants have become a source of fierce political debate, while much less attention has been given to what forces people to flee.

In Latin America, a series of interrelated factors have contributed to fundamental reasons people are leaving their homes to journey across the U.S.-Mexico border. Most of the reasons are known as “push factors.”

With regard to the security push factor, in 2016, the Northern Triangle, composed of Guatemala, Honduras and El Salvador, was named one of the most violent regions in the world. All three Northern Triangle countries record thousands of crimes by local and international gangs and armed criminal groups, and most crimes are met with impunity.

Looking at the economic and environmental push factors, research says 95 percent of displaced persons come from low- and middle-income countries dependent on ecosystems easily affected by natural disasters such as hurricanes, volcanic eruptions and extreme weather patterns (drought, flooding, etc.). According to the Central American Commission for Environment and Development, four Central American countries—Honduras, Nicaragua, Guatemala and El Salvador—are among the world’s 15 most vulnerable states in the face of extreme climate-change events.

Push factors, such as family separation, combine with pull factors in causing people to migrate. The primary connection that many people from Latin America have with the United States is family. Strong family ties and often religious values push people to leave their homelands and pull them across borders in the hope of settling with siblings, parents and relatives who have already crossed the border.

Pope Francis has said, “Migrants and refugees are not pawns on the chessboard of humanity.They are children, women and men who leave or who are forced to leave their homes for various reasons, who share a legitimate desire for knowing and having, but above all, for being more.”

Here are some questions to consider: When and why did your family emigrate to the United States? What was the mix of push and pull factors that made your family decide to migrate?

• Read and share the two-page flyer “Root Causes of Migration” produced by the U.S. Conference of Catholic Bishops http://bit.ly/RootCausesFlyer.

• Find U.S. policy recommendations based on lessons learned from the federal response to the growth in migration from Latin America from 2011 to 2016 in this new report published by the Center for Migration Studies entitled “Moving Away from Crisis Management.” http://cmsny.org/publications/cutlip-mason-crisis-management/

Featured Image: Carmen Aguilar from El Salvador cries in Guatemala en route to the United States in hope of working to provide for her three children. (CNS/U. Marcelino/Guatemala)

From Woundedness to Wholeness in Taiwan 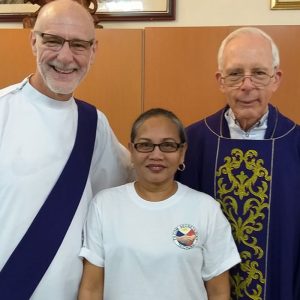 From Woundedness to Wholeness in Taiwan

Cecil Zamora, a migrant worker in Taiwan, learns to forgive by helping others || Cecil Zamora could easily be a bitter...