" /> Ryan Thibert: Called to Care as a Brother | Maryknoll Magazine

Ryan Thibert, from Canada, takes his permanent oath as a Maryknoll brother

Recalling his first visit to the Maryknoll Society campus in Ossining, N.Y., Ryan Thibert says, “I felt I had finally arrived at my home, the place I was called to be.” After eight years of study and service, he will take his permanent oath on May 31, committing himself to a lifetime of service as a Maryknoll brother among the world’s most vulnerable people. He has been assigned to the Latin America region.

Brotherhood is natural for the 37-year-old native of Ontario, Canada, who was born a minute after his twin brother, Aaron, and four years after their sister, Jennifer. “My brother was supportive and encouraging,” says Thibert. “We challenged each other, but he always had my back.”

Growing up in a strong Catholic family, whose faith was nourished at All Saints parish in the city of Strathroy, Ryan Thibert says that early on he felt an attraction to religious life. He sought direction from his parish priest, who knew Maryknoll and thought it might be a good fit for his mission-oriented parishioner.

Maryknoll Society members like Brother Robert Butsch put a human face on the missionary vocation for the Canadian. He recalls being enthralled by Brother Butsch’s stories and photos of his work in China: making special footwear for people with Hansen’s disease. “I was blown away by his passion and how the Holy Spirit was working through him,” says Thibert, adding that he could see himself following this path, using his own educational background and artistic talent to help people be the best they can be. 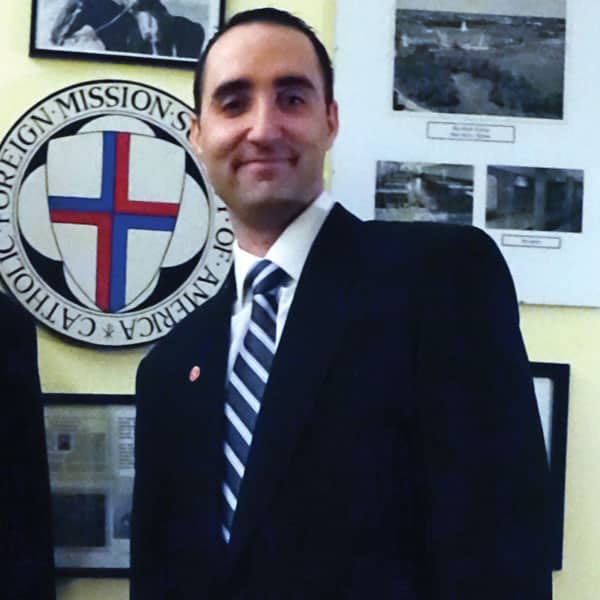 Maryknoll Brother Ryan Thibert will soon take his permanent oath, pledging a lifetime of service to the world’s most vulnerable. (M. Sim/U.S.)

A short-term mission trip to Jamaica with three other prospective Maryknoll candidates sealed his decision. The four visitors, he says, volunteered at Blessed Sacrament Orphanage in Montego Bay, where they helped children who were not only orphans but also suffering from various physical ailments. During the immersion trip, one of the children died. “The child had no family member to be a pallbearer,” says Brother Thibert. “The three other prospects and I were the pallbearers. I was honored to honor the memory of this child I didn’t even know.”

That experience, he says, brought to mind the Franciscan brother who had come to console his family when his grandfather died. He also recalled a Canadian saint, Holy Cross Brother André Bessette, who, Thibert says, “served the poor as a doorman and gatekeeper and had a spark to be open to people’s needs.” Thinking of those men of mercy, Ryan Thibert came to an important conclusion: “Being present, giving life to those who need love, that is the essence of the brother’s vocation.” That’s what he felt the Holy Spirit was calling him to do. He joined the Maryknoll Brothers’ formation program in 2011.

In addition to deepening his spirituality through prayer and theological studies, he completed his undergraduate degree in art at St. Xavier University in Chicago. Then he traveled to Cochabamba, Bolivia, for his overseas training program, now a two-year program in which young missioners are immersed in language study and life in another culture as well as various pastoral works as they continue to discern their call to cross-cultural mission.

Over the course of his OTP, which then consisted of three years, Thibert lived with two different host families as he learned Spanish. He also lived with a Maryknoll community as he worked in parishes and assisted in specialized ministries, including a senior care center, an after-school program and an HIV/AIDS support center. The whole OTP process, he says, was “transformative.” 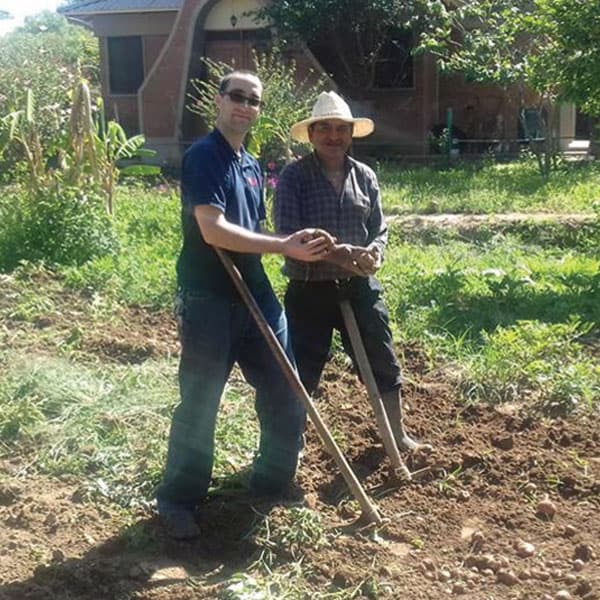 “I have learned from the Bolivian people and culture that it is crucial to have personal, meaningful friendships and relationships that are developed and nurtured over time,” he says. “These relationships make the bonds of connection stronger and more meaningful in ministry and daily life.”

He also learned a lot from the people he ministered to, such as Carlos, an elderly man at the senior center who never had visitors and sat apart from the other residents. “One day I introduced myself and we talked,” says Brother Thibert. “Carlos talked about his family and he cried. He said he missed his children. My showing an interest in him gave him strength to share his feelings. He began praying with the group. He just needed somebody to show him, ‘You are a person God loves. You matter.’ ” 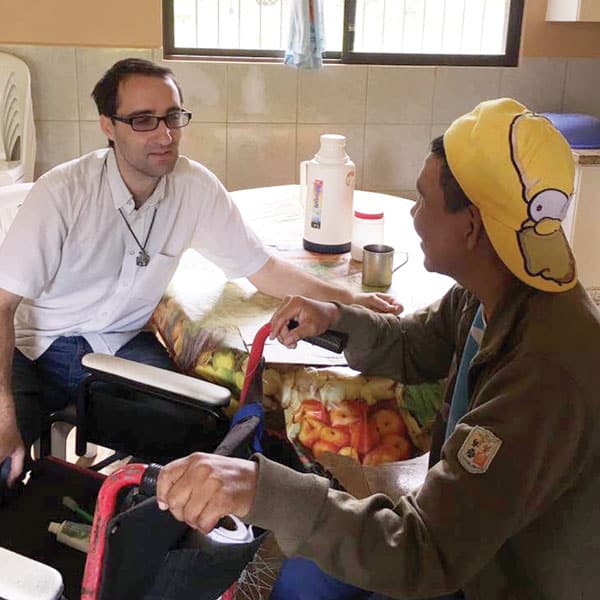 Ryan Thibert listens to a resident’s concerns at a senior care center in Bolivia. (Courtesy of R. Thibert/Bolivia)

Brother Thibert sees that thread running through all his ministries in Bolivia. “People need to know someone cares about them,” he says, adding that being present to people is the greatest tool missioners have to share God’s love.

Art has also been helpful to him in mission. “Art,” he says, “allows people to communicate and express their feelings in a safe and loving environment.” He remembers how he used it to help Tito, a Bolivian man in the HIV center who was paralyzed on his left side and couldn’t speak. “He was usually angry,” Brother Thibert says, “but when I asked him to create a type of design called a mandala, he became so peaceful as he focused on the design.”

Back in Chicago, where he has been studying psychology during the past year, he has used art projects to help immigrant children express their anxieties as they adjust to a new home. 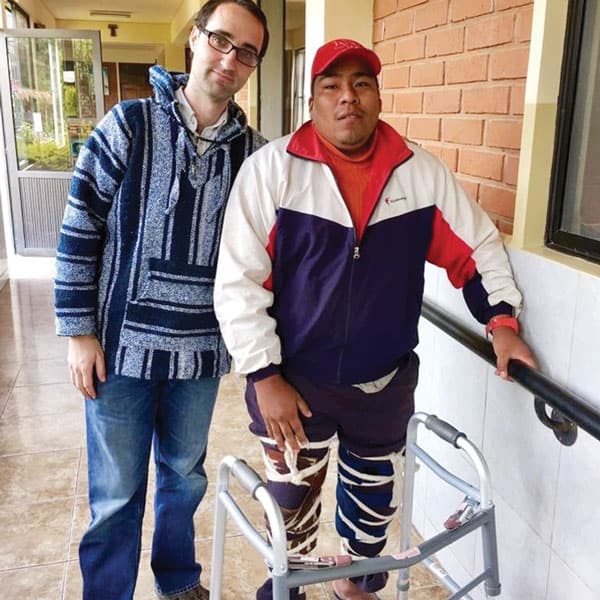 Maryknoll Brother Mark Gruenke, who served as Thibert’s mentor during formation, says, “Ryan is not afraid to be a brother to those who lack the brother or sister they so badly need.”

Ryan Thibert gives credit to his parents, Larry and Rox-Ann Thibert. “I am who I am because of their unconditional love,” he says.

He is aware that not many young men today are choosing the life of a religious brother, but he gives a simple reason for doing so: “I realize that it is in living for others through Christ where I feel truly happy and at peace.” 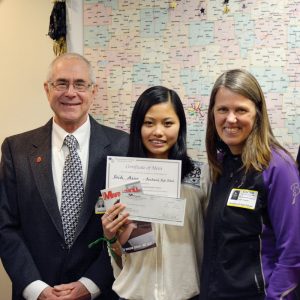 Our theme, “Love in Action,” referenced Pope Francis’ letter Rejoice and Be Glad in which he reminds us we are called...