Sister Jeanne Rancourt answers a call to care for asylum seekers in a U.S. border city

The appeal that went out to all congregations of sisters across the United States last fall was urgent. The president of the Leadership Conference of Women Religious (LCWR) was pleading for volunteers to come to the aid of Central American refugees in dire need on the U.S. southern border.

Almost immediately 350 sisters offered their services. Maryknoll Sister Jeanne Rancourt was one of them. A registered nurse who served more than 50 years in Chile, Sister Rancourt knew her experience and skills would be useful. “After praying about it,” she says, “I decided to volunteer for a month at San Juan Diego Center in El Paso, Texas.”

This art and faith formation center for youth had been turned into a temporary home for refugees who had been released by the Immigration and Customs Enforcement (ICE) to make room for the steady stream of new arrivals in ICE’s overflowing detention centers. ICE had given the released asylum seekers temporary legal status while they waited for the courts to decide their future, but left them to fend for themselves as they looked to connect with friends and relatives in the United States.

Moved by the plight of these desperate people, Ruben Garcia, who runs a homeless shelter, Annunciation House, in El Paso, called on churches, parishes, community centers—any organization that could help—to open their doors to the refugees. He was able to coordinate the establishment of 15 temporary shelters between El Paso and nearby Las Cruces. LCWR asked the sisters to help in these shelters.

Arriving at San Juan Diego Center in mid-December, Sister Rancourt joined three other Maryknoll sisters preparing bags of toiletries for 43 men, women and children being sent by ICE that day. Recalling the refugees’ arrival, she says, “Their quiet descent from the ICE bus was heart-wrenching for us all as we watched them come slowly, fearfully toward us. As I greeted each one, looking into their eyes, I could see the suffering endured on a long journey and the uncertainty of the future that still lay ahead. A toddler stretched out his arms to me in trust, and I tried not to break down.”

Sister Rancourt got into the routine of a typical day. “An ICE bus arrives usually in the afternoon, with about 40 adults plus their children,” she says, adding that all the adults must wear a tracking device attached to their ankle until they get their day in court, when a judge will decide if they can remain in the country or be deported. “Immediately, they are all brought into a big room and served hot soup and tortillas. Then, they move into another room, where each family or individual meets with a volunteer who takes the information needed to contact their sponsors, who must be notified that they have arrived.” Sponsors, she explains, may be relatives or friends who must agree to be responsible for the migrants and buy the tickets for the bus, train or plane that the migrants will take to their destination. 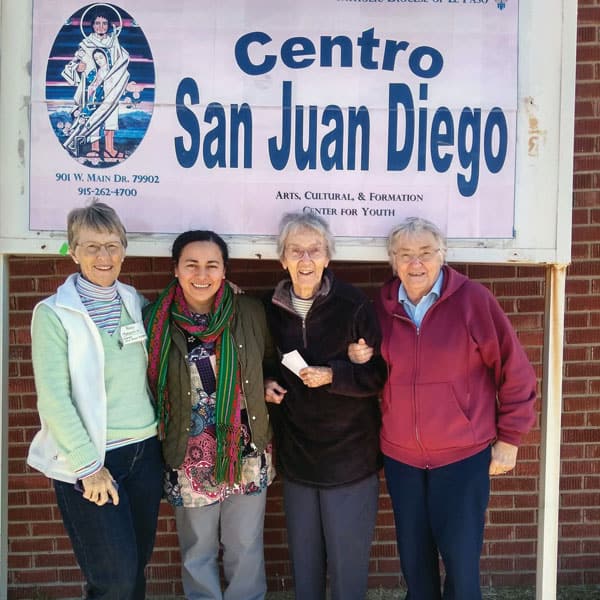 As they finish the paperwork, she says, the migrants move to another room where they can pick out clothing for themselves and their children and receive a bag of toiletries and access to a shower. “Then they are led to a hall where volunteers from El Paso have come with a hot meal for them. Volunteer groups are notified of the number to be fed and they arrive with a delicious supper all prepared!” says Sister Rancourt. “You can imagine that by now the tension is broken and there is laughter and camaraderie among people who were strangers.”

Two large rooms are provided for sleeping—men in one and women in the other, and children with a parent. “There are not enough cots, so some sleep on the floor with a blanket,” says Sister Rancourt. “The day ends for the volunteers at about 11 p.m.”

Sister Rancourt calls the constant stream of volunteers who give of their time and resources to aid their brothers and sisters “nothing short of miraculous.”

She also witnessed other miracles, she says. She recalls the day she and two other sisters were making a spaghetti meal for 20, when suddenly a bus with 30 more asylum seekers arrived. “The meal was cooked and we had no more spaghetti,” says the missioner from Woonsocket, R.I. “We prayed that everyone would be fed enough.” She happily reports, “All were fed and there was still a spoonful of sauce and spaghetti left!” Reminded of Jesus’ multiplication of the loaves, she calls this the “Multiplication of the Spaghetti.”

Another day, when the center coordinator was concerned that they needed more pillowcases, Sister Rancourt reassured her: “God knows, before we do, what we need.” Later a box arrived anonymously with new pillowcases.

Many refugees arrive with colds, sore throats, fevers or dehydration, says Sister Rancourt, who was able to address most of their medical conditions, though she says a few required hospital care.

She says most of the refugees are ready to travel after a night’s stay at the center. Volunteer drivers come to take them to their transportation. Each migrant is given a card saying: I don’t speak English. Can you please direct me to the right gate? Somehow, says Sister Rancourt, they find the right places and eventually are met by loving relatives or friends.

The missioner was moved by one refugee who came to the volunteers before she left the center. “We want to thank you for all your kindness to us,” the woman said. Such memories remain with Sister Rancourt as she says, “I saw the face of God in the faces of these people.”

Featured Image: Central American migrants who were dropped off at a bus station in El Paso line up for food before being taken to emergency shelters. (CNS/J. Gonzalez, Reuters/U.S.)

Learn More:
To read reflections of Maryknoll priests who also volunteered on the U.S.-Mexico border, go to “With Asylum Seekers in McAllen”  and “With Refugees in El Paso.” 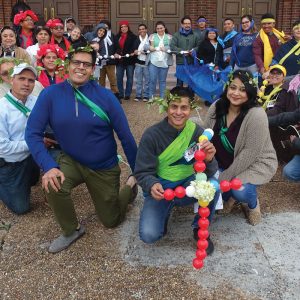 Maryknoll helps Hispanic youth in Texas to serve in mission || During a short-term immersion trip to Bolivia organized...