Reflection: With Refugees in El Paso

“The chimes of freedom are flashing for the refugees on the unarmed road to flight.” Long before I hit the ground running in a hospitality center for refugees and migrants in El Paso, Texas, Bob Dylan had captured, in a line in his song, what I would see and feel in that center between February 26 and March 6 this year. During that week we received people from Guatemala, Honduras, El Salvador and Brazil, a family from Angola, and a father and son from the Congo.

Each day, as 60 to 90 refugees and migrants got off buses from government detention centers and entered our door, tired and dirty, anxiety and uncertainty were evident in their faces and movements. We would first assure them that we weren’t immigration officials but their friends, not paid employees but rather volunteers, and our building was not another detention facility but rather the Pastoral Center of the Catholic Church of El Paso. 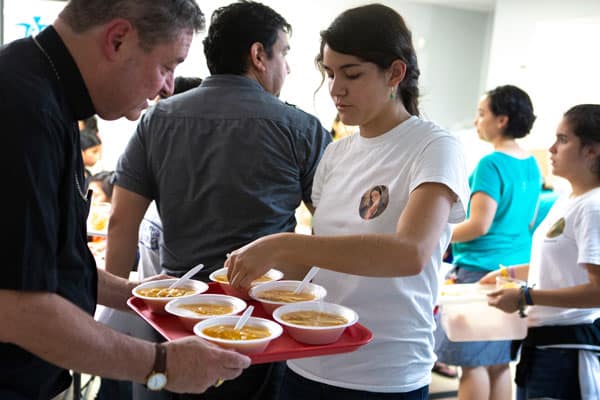 Help at the border: Bishop Robert J. Brennan, auxiliary bishop of Rockville Centre, N.Y., helps a volunteer at a Catholic Charities-run respite center. A delegation of U.S. bishops has traveled to the Diocese of Brownsville, Texas, to learn more about the detention of Central American immigrants at the U.S.-Mexican border. (CNS photo/Chaz Muth)

We assigned them numbered cots as their “home place.” We interviewed them for basic data. We telephoned their family or friends in the United States who were sponsoring their trip, requesting the purchase of bus or plane tickets to their destination. We took them into our storeroom of donated items to choose a change of clothes. We gave them towels and led them to a shower room. We provided them with simple medicine for headaches or coughs. We fed them breakfast, lunch and dinner (brought in by neighboring communities, usually church groups). We bedded them down at night and woke them in the morning.

We needed most refugees to move on in less than 36 hours because another large group would usually arrive the next day. We would drive them to the airport or bus station, depending on what their sponsoring relatives or friends had decided, providing them with a snack to carry on the bus or plane.

We offered the refugees and migrants compassion and kind words, and their worried, anxious faces took on smiles and gratitude. (Two Brazilian couples told us they had never been treated so well!) Their hearts began to hear “the chimes of freedom” as they felt respect and sensed dignity. These vulnerable people, served by us on their “unarmed road,” in turn became servants of one another (cleaning up after meals, mopping floors, etc.).

When I arrived in El Paso on the evening of February 26, I was picked up at the airport by Daron Mulligan, one of the coordinators of the refugee site in the pastoral center, part of a network of hospitality centers of Annunciation House. Since I had requested on-site residence, I was assigned to a simple room in the basement: no windows, heat or bathroom! It did have a not-too-comfortable bed and a space heater. I quickly discovered that the “discomforts” were not that important. I would be so tired at the end of each day that I’d go to bed at 9:30 p.m. and sleep soundly until 5:30 or 6 in the morning. That meant I was present when the refugees rose at 7.

The morning after my arrival, the bishops from both sides of the Texas-Mexico border celebrated their biannual get-together with a Eucharist and breakfast at the pastoral center. For the breakfast, the refugees were seated first and then the bishops sat down among them. It reminded me of my days with the Brazilian bishops of the 1970s and 1980s. The impression I got from the morning is that the refugees are calling the Catholic Church of the Southwest to conversion. After the Mass and at the meal, I had the opportunity to meet a number of bishops from both sides of the border. 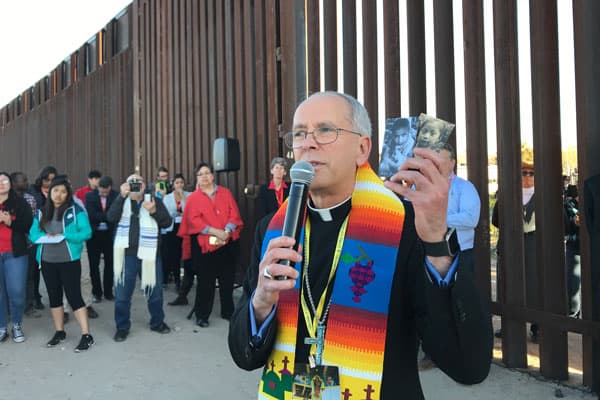 Bishop Mark J. Seitz of El Paso, Texas, holds photos of two migrant children who died in U.S. custody; he spoke during the Feb. 26 Interfaith Service for Justice and Mercy at the Border near Sunland Park, N.M. (CNS photo/David Agren)

In the afternoon I met Bishop Mark Seitz of El Paso. When he discovered I wasn’t very comfortable in my basement room, he invited me to stay at his house. I never accepted his invitation because I came to see the advantage of being with the refugees 24 hours a day. Eventually, I spent my last two nights with Father Fabian Marquez, who lives about a 10-minute walk from the pastoral center.

Even though I’d never seen them, I knew the refugees and migrants before they walked through our door. Though their regional accents were different, they were the peasant farmers of the cornfields of Yucatán, the under-employed of the vecindades of Mexico City, the inhabitants of the favelas of São Paulo, and the landless who occupy precarious tent settlements in northeast Brazil. But they also knew me, because I was their priest. Even evangelicals would ask me to bless them as they left us to travel.

On my second full day at the pastoral center, among the many migrants was a young father named Alex, shoeless, who had been carrying his 2-year-old son because the boy was sick. Alex had been separated from his wife at the border. Worn out physically and emotionally, he collapsed, weeping, into my arms. With his son looking on, Alex and I wept together. That night, lying in bed in my dark room, I heard Maryknoll Bishop James Edward Walsh’s voice: “I choose you and I dedicate myself to you … remind me everlastingly [of] magnificent people like you.” James Edward was speaking of a Chinese farmer boy; I was thinking of Alex. I again wept.

I’m not sure who I fell more in love with: the refugees and migrants or the volunteers I worked with. Though we loved much and worked to the point of exhaustion, neither I nor my fellow volunteers are heroes or martyrs. The heroes and martyrs are the refugees. We volunteers are simply people “stirred by a passion stronger than ourselves” to serve them in their painful steps on their vulnerable road to freedom and dignity.

I left El Paso on Ash Wednesday. There were no ashes, but during the week I was with them, both refugees and volunteers had shown me the meaning of life.

While I waited in the Dallas airport for my flight to St Louis, I felt relief. I could finally rest.

As I sat at the gate, my ears still carried the sounds of children crying and coughing in the early morning hours. I also still carried kisses on my cheek from two beautiful girls, aged 8 and 2, as I helped them and their Salvadoran mother board their plane out of Dallas for Washington, D.C.

I had said to one of the other volunteers that our work with the refugees was exhausting and at the same time invigorating. She had agreed. As I settled into my seat on the plane, I was tired but felt fulfilled.

Do I hope to return to El Paso? I do, James Edward, I do.

Featured Image: A migrant from Central America feeds his daughter at a shelter by the U.S.-Mexico border. (CNS photo/Jose Luis Gonzalez, Reuters)

James Hilgeman, M.M.
Father James Hilgeman, of St. Louis, Missouri, served the Mayan people in Mexico from 1965 to 1976, and later he served as a missioner in Brazil for nearly 20 years.

Reflection: With Asylum Seekers in McAllen

Reflection: With Asylum Seekers in McAllen