Father John Cuff’s missionary life officially began with his sailing to his mission with six other Maryknoll priests in 1969. “I remember taking that ship for 25 days without sight of land; it was a rite of baptism,” he recalls. “I was leaving one whole life behind me—going into the unknown.”

The ship landed in Singapore first and the missioners went to their assignments in the Philippines, Taiwan and Hong Kong, on the southern coast of China—where Father Cuff was headed.

Since then, the missioner from Chicago has served as pastor at five Hong Kong parishes, worked to establish small Christian communities, helped draft the evangelization document for the First Hong Kong Diocesan Convention, taught at universities in mainland China, and engaged in pro-life initiatives for the Birthright Society. 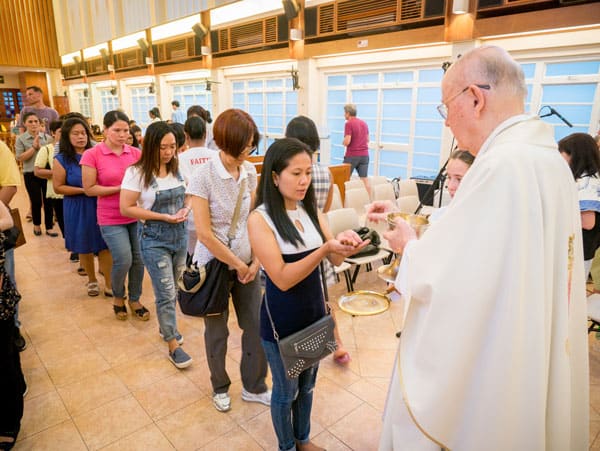 “I have been trying to plant the faith in the heart of the people,” Father Cuff says. “I was very blessed to be assigned to Hong Kong. Walking with people in Hong Kong, in this fast-paced society, makes me happy and keeps me young.”

One of Father Cuff’s first assignments was to a Maryknoll parish founded to serve refugee families who had come from China in the 1950s. Father Cuff fondly recalls his work with the Block 18 Center, a center that provided medical, educational and relief services for the community, as well as recreational activities for young people.

Young parishioners formed “God squads” to share the Good News. “We asked some youth to become missionaries with the priests and sisters, to go out into the (resettlement) buildings at night when people were coming back from factories,” he says.

From the beginning, Father Cuff focused on evangelization. As a young Maryknoller, he says he took new approaches to evangelization, inspired by the Vatican II missiology of “the Church as ‘sign and instrument’ and in a ‘servant role’ to the Kingdom.”

During the 1990s, Father Cuff worked at Immaculate Heart of Mary Church moderating a team of four priests and four sisters in Tai Po, a city with 800,000 residents. “It was a different ball game, young families moving with little kids. We took the Basic Christian Communities’ approach, going out to housing complexes, visiting homes, inviting non-Christian neighbors,” he says.

Much has changed in Hong Kong, says the 77-year-old priest, but the need for evangelization in the densely populated city remains. “I think the real mission is here in Hong Kong, where you have the challenge of wall-to-wall people who have not heard the Gospel yet,” he says of his mission field, which is home to almost 7.5 million people. “And a lot of them are very curious and they are hungry” to know about God, he adds.

Based on diocesan numbers, Father Cuff estimates that 3,000 to 3,500 are baptized every Easter. But, the priest adds, the diocese’s 400,000 Catholics need constant formation and catechumenate opportunities to deepen their faith. A shining example of these efforts is Our Lady of Mount Carmel, a church located on the bottom four floors of a 42-floor skyscraper, where he served for 13 years. (To read more, go to “Evangelizing Among Skyscrapers”.) 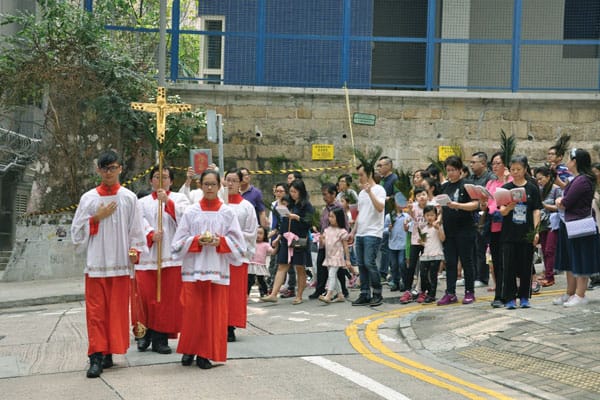 Our Lady of Mount Carmel parishioners share their Catholic faith in the streets of Hong Kong during Palm Sunday procession. (Courtesy of OLMC Church/Hong Kong)

In late 2017, Father Cuff was assigned to St. Anne’s parish in Stanley peninsula. “It has a tremendous history with Maryknoll. I am just the latest guy,” says Father Cuff, adding that he enjoys working alongside members of the cosmopolitan parish.

Long-time parishioner Jennie Li says they all remember the many Maryknollers who served in Stanley, including former pastor Father Elmer Wurth. She said the joy of the men of Maryknoll encouraged camaraderie, mutual support, spiritual guidance and a commitment to service. “They are truly missionaries … They really reach out to the people,” Li says. “Whenever someone was in the hospital or asked him to go for an anointing, Father Elmer would just jump to it.”

“A big proportion of parishioners are expatriates, so we have a sending-off ritual” when they travel back to their home countries, says Vivian Lee, who has been an active member of St. Anne’s for over 17 years. Maryknoll priests “would give them a cross, saying they are not leaving us, but going out to mission wherever they go,” she says.

Parishioners Mary Dee and John Mulligan, who are originally from the United States, say the Maryknollers they have met in Hong Kong have encouraged them to share their faith “in a very real way.” 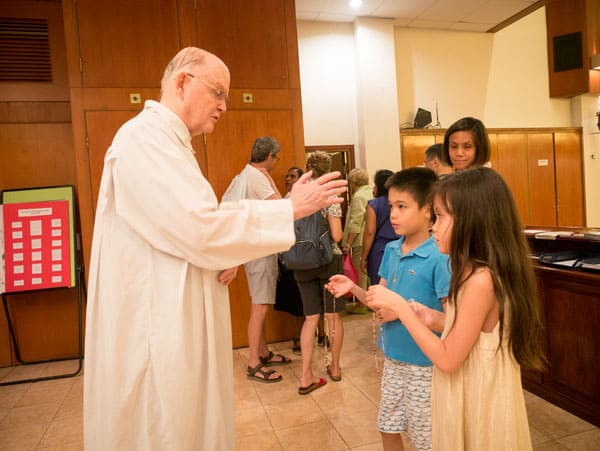 “The learning and growth in my faith that I received from all of the Maryknoll missioners and the sisters I met over the years—that wonderful joy they have and the piety and the service they do—it’s really been an inspiration for me to get out there and do service myself,” John says.

Father Cuff, who accompanies parishioners in visiting prisoners and people with disabilities, hopes to offer more opportunities for formation and service at St. Anne’s.

As he prepares to celebrate his 50th jubilee, Father Cuff says he feels fortunate for “planting my roots here in China and growing in the mission” of the Hong Kong diocese. “I’ve led a blessed life,” he says. “I’m very grateful for that and for Maryknoll, which has always put me in the right places.” 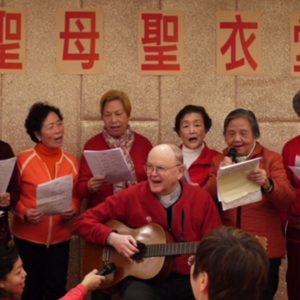 || For the business-minded Chinese, location is everything. As Catholics in the business of evangelization, this fact...