A Healing Ministry for Body and Soul

On the ground floor of the rectory of Transfiguration parish in Mwanza, Tanzania, 2-year-old Jordan, who suffers from cerebral palsy, smiles broadly as he struggles to walk between two low parallel bars. His aunt, Edita, helps hold his tiny hands to the blue bars.

A physical therapist assistant, Ana Petro, corrects the child’s grip and then pats a homemade ball in front of the boy, indicating he should kick it. “Goal,” she encourages him. “Goal!”

Nearby, Anne Kuijs, an occupational therapist from the Netherlands, coaxes Ester, a 1-year-old girl who also has cerebral palsy, to hold a rattle made from a round gourd on a thin stick. The child’s mother, Miriam, assists Kuijs and is learning ways to continue the therapy at home.

The treatment these two special needs children are getting is part of the Mabatini Public Health Center, a holistic ministry of the Maryknoll Society-founded parish in the crowded Mabatini neighborhood of Mwanza, the second-largest city in the East African nation. This public health ministry is at the heart of the parish team’s emphasis on healing, and, like the healing ministry of Jesus, extends to the physical, emotional and spiritual well-being of the community, whether or not those in need are parishioners.

Edita helps her 2-year-old nephew Jordan with physical therapy at the Mabatini Public Health Center, a ministry of Maryknoll-run Transfiguration parish in the Mabatini section of Mwanza, Tanzania.

The physical and occupational therapy that Ester and Jordan receive is part of the rehabilitation component of Transfiguration parish’s multi-pronged effort to foster greater awareness around health issues, and to empower local people individually and as a community to be participants in health care.

The rehabilitation pillar serves about 35 children with disabilities, both on-site in what was originally a garage bay for the rectory, and at the children’s homes, where parents and caregivers, such as Edita and Miriam, use skills learned at the Mabatini Public Health Center to continue the therapy the youngsters need.

The community-based health initiative includes dental and vision clinics that provide free or low-cost screenings, as well as seminars on serious health concerns in the community. The school-based health work involves teaching health education in six local primary schools, screening children for health issues and tracking their progress, as well as promoting inclusiveness and mainstreaming of children with special needs into the regular classroom where possible, Charles Petro says. 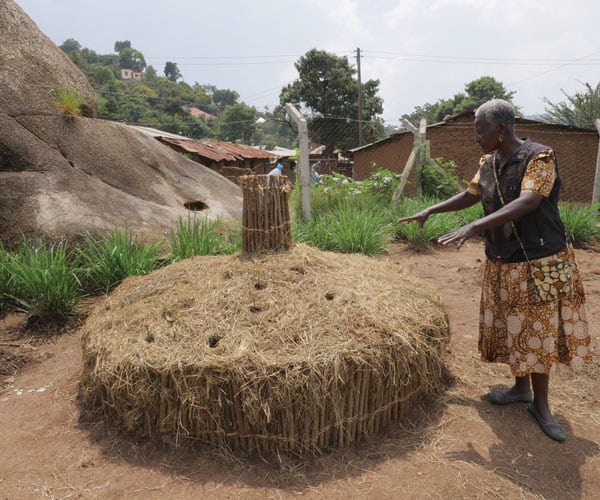 Natalia Kadio, director of Mabatini Public Health Center, a ministry of Transfiguration parish in Mwanza, Tanzania, shows a raised garden bed that was recently seeded with medicinal plants as part of efforts to promote health and well-being.

While the pastor, Maryknoll Father Lam Hua, is responsible overall for the parish ministries, the day-to-day oversight of the center is under the direction of Natalia Kadio, a nurse and midwife from the Mount Kilimanjaro region of Tanzania, who has served at the parish for 15 years.

Kadio is largely responsible for the health ministry’s emphasis on preventative health care and its holistic approach that includes an herbal medicine project in which medicinal plants are grown on the parish grounds and sold at cost to members of the community.

“The big aim here,” says Kadio, “is not that they think of this as a public health center where they can come and get served, but as a place where they can come and learn what we’re doing here and go back and use what they’ve learned.” The center provides local people with knowledge and opportunities to shift management of their health care and well-being into the community, she says.

Members of Transfiguration parish in the Mabatini section of Mwanza, Tanzania, help with planting medicinal plants as part of the parish’s holistic ministry of healing body, mind and soul.

“What I do is try to make sure that all of us are working together,” Kadio says. “We know what we are doing. We have a focus together.” She is an advocate for the needs of various groups in the community—youth, the elderly, women and men—and acts as a liaison between them and the parish and local government.

“We have cervical cancer and breast cancer, which are big health issues here, and there’s also high blood pressure and diabetes, and sometimes the community doesn’t know much about them,” she says. “So I try to talk to the doctors or the nurses or people who can shed more light on these health issues. So we organize together. We cooperate together and plan for what is needed in the community.”

Kadio sets the vision for what the team does, Petro says. “The vision and the projects that we have come from Natalia’s ideas of having talked with somebody or talked with this community group or talked with this leader and saying, ‘OK. We should do this’,” he says. “Then we sit down and we say, ‘How are we going to do this?’ And we develop a plan.”

As part of that parish team Maryknoll Father John Eybel, who is the assistant pastor at Transfiguration, works closely with the health center, not only providing spiritual guidance but most recently helping local people navigate the country’s national health insurance fund. 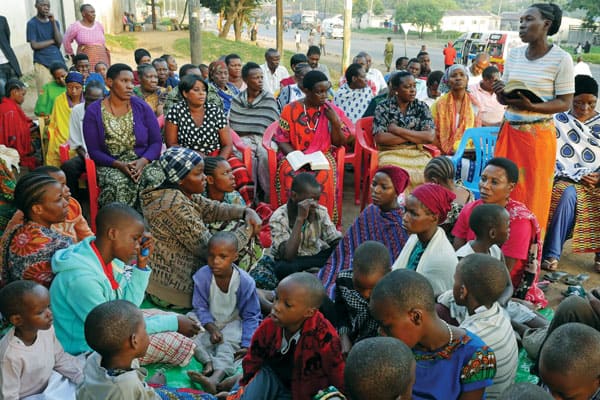 Members of several small Christian communities in the Mabatini neighborhood of Mwanza, Tanzania, gather outside some homes and shops one early morning for Scripture and prayer.

Father Eybel explains that he and the team spent about a year and a half learning how the national system works so they can help educate local Tanzanians to participate in the program. They need to be organized into groups to get the lowest insurance rates.

The biggest challenge, the priest from Oakland, Calif., says, is helping people understand how an insurance fund works. He has to explain that even though they pay into the fund at times when they are not getting sick and using the health insurance, they are helping others who need medical care now, just as they will need it later.

When the problems are less physical and more related to the stresses of daily life, both Father Eybel and Kadio, who are trained in counseling, find plenty of opportunities in Mabatini to listen and respond to those in distress. Father Eybel is also involved at the parish in Marriage Encounter, small Christian communities, youth ministry, and has long been involved in and taught Clinical Pastoral Education to other religious and health care professionals in Tanzania.

For Father Eybel, though, healing goes beyond the physical and emotional dimensions to the spiritual, which he describes as “breaking curses and finding God’s abundant blessings.” One place that is apparent is in the Catholic charismatic movement that is active at Transfiguration under Father Eybel’s auspices. 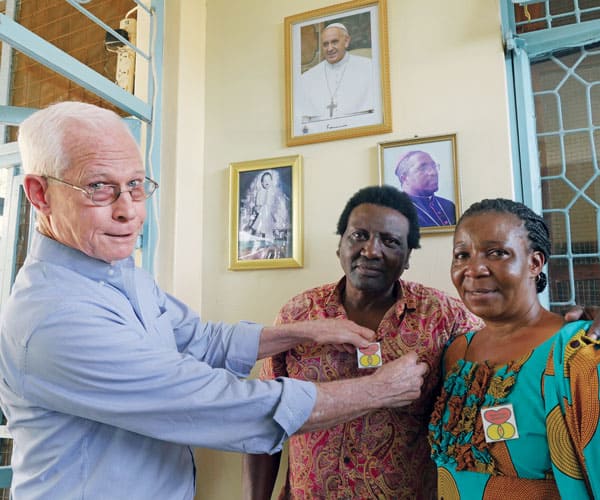 Maryknoll Father John Eybel awards pins to Anton and Eugenia Msafiri, who had completed a Marriage Encounter weekend to help them strengthen their relationship.

As a seminarian in the 1970s, Father Eybel became involved in the Catholic Charismatic Renewal, which had started at Duquesne University in Pittsburgh in the mid-1960s. He has found it alive and well in Tanzania.

“This is a valuable ministry because of the fruits,” Father Eybel says of the Catholic charismatic services held once a week at the parish, adding that the charismatic expression is effective in reaching a segment of the population that typical Catholicism is not reaching.

“People are flocking to this as an adjunct to being a Catholic because of the experiential nature of the singing, the dancing, the joy, the movements that help them shed their worries and find themselves surrendering to the Holy Spirit,” he says. “For them, that’s an experience of being safe, being secure in the church and among God’s people.” 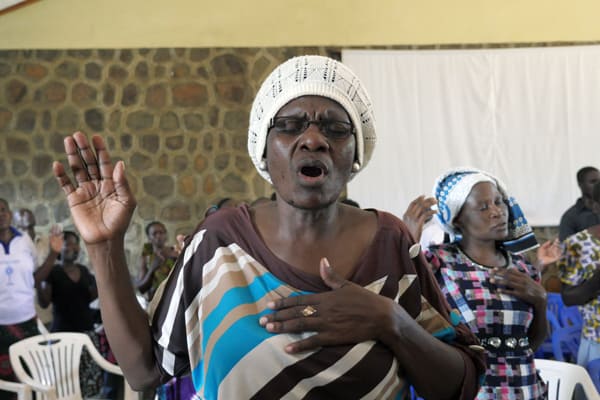 A woman prays at charismatic worship service at Transfiguration Church community center in the Mabatini neighborhood of Mwanza, Tanzania, one aspect of the holistic ministry at the Maryknoll-run parish.

Father Eybel eschews any personal credit for the healing that goes on at Mabatini’s Transfiguration parish. Rather, he talks instead of the “great, capable and effective women who do healing ministry” among the local Catholic community.

“There are women who know the cultural nooks and crannies of their souls,” the Maryknoll missioner says, “and get there in short order to find out where the despair is, where the hopelessness is, and where the hate is, and to find a way to touch that through God’s grace.”

Journey of Life and Death in Appalachia 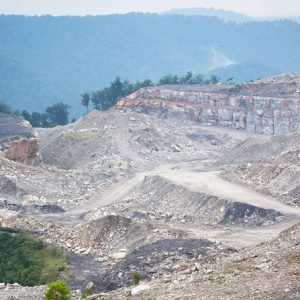 Journey of Life and Death in Appalachia