Last June, the Global Peace Index, through which the international Institute for Economics and Peace ranks 163 independent states and territories according to their level of peacefulness, declared 2017 to be the fourth successive year of deterioration in global peace. Noting that 92 countries had deteriorated, while 71 countries had improved, the report described a world in which “tensions, conflicts and crises that have emerged over the past decade remain unresolved, causing a gradual, sustained decline in global levels of peacefulness.”

We don’t know yet what the Global Peace Index will report this June, but we do know that violent conflicts continue, from South Sudan to Yemen to Afghanistan and beyond. According to the United Nations, between 2005 and 2017, the number of humanitarian crises receiving an internationally led response almost doubled, from 16 to 30, while the average length of a crisis rose from four to seven years.

Even though research gives evidence that prevention programs are effective in increasing security and ending conflict, only about 2 percent of aid to “fragile states” is spent on preventing conflict. The Organization for Economic Cooperation and Development (OECD) defines a country as fragile when its government is unable to perform basic functions in the areas of security, rule of law and basic social services.

The Global Fragility Act of 2019, a bipartisan bill now before Congress, sets out a strategic plan to prevent violence. This bill requires the United States government to collaborate with civil organizations and international partners to develop a 10-year strategy to reduce current levels of global violence by identifying the causes of conflict, developing strategies for prevention in vulnerable countries, and budgeting more resources to address the root causes of violence.

The Global Fragility Act would authorize the appropriation of funds from the Prevention and Stabilization Fund, administered by the U.S. Department of State and USAID, in order to prevent violence, stabilize conflict-affected areas and provide assistance to areas affected by terrorism and extremism. The act cites USAID as the “implementing agency” in developing programming and coordinating humanitarian efforts. While the bill would also authorize the Complex Crises Fund, it does not allow the use of this fund for “lethal assistance” (such as weapons or ammunition) or disaster relief. Rather, this fund is to be used to address unforeseen challenges and crises.

By passing the Global Fragility Act, the United States will be able to more effectively prevent violence and reduce its enormous cost on families around the world.

• Write to Congress to ask your representatives to support the Global Fragility Act of 2019 http://bit.ly/GFA2019

• Read and share the 2019 Global Peace Index report when it is released http://visionofhumanity.org/indexes/global-peace-index/

Featured Image: A Christian woman prays at a cemetery in Bhopal, India. The Global Peace Index ranked India 136 of 163 in 2018. Iceland ranked Number 1. The United States was 121. (CNS/S. Gupta/India)

Spirit of Mission: A Woman's Place 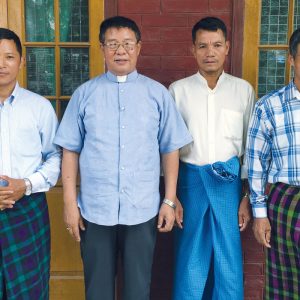