||
Text and photos by Sean Sprague

I’ve been a deacon for eight years and I think on this trip I’ve found out what being a deacon is all about,” said Joe Peters from Chicopee, Mass. He and his wife Jan along with several other U.S. deacons, their wives and other church leaders had just returned from a Maryknoll mission immersion trip to El Salvador. There they had spent five days visiting the sites of martyrs who had given their lives in the service of the Gospel during the country’s civil war between 1980 and 1992.

Deacon Mike Berstene of Tolland, Conn., a member of the Maryknoll Deacon Mission Partners, who was on the trip, explains why such a pilgrimage is especially important for deacons:

“At its very core, the diaconate is called to animate and lead the Church in bringing the mission of Christ into the world, especially to those who are poor, lost or forgotten,” he says. “A deacon whose heart has been touched in an immersion experience can bring that passion into the Church and is better prepared to bring the Church into the streets of his own community.” 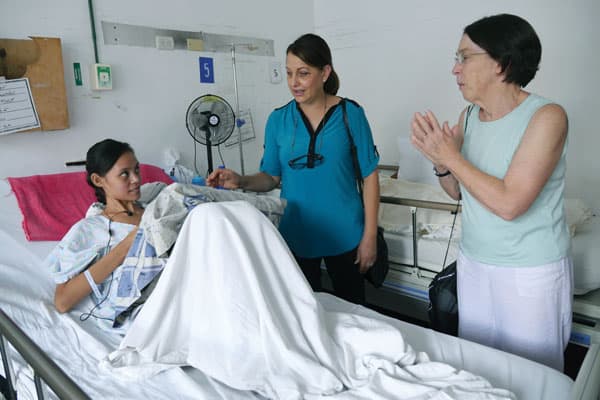 Jan Peters (r.) and Martha Moon visit a patient at the national hospital in San Salvador, while accompanying Maryknoll Father John Northrop and his pastoral care team on rounds during an immersion trip to Central America. Photo by S. Sprague/El Salvador

The murder of Salvadoran Archbishop Oscar Romero in 1980 by a single bullet from a death squad assassin while the archbishop celebrated Mass in a hospital chapel is perhaps the most notorious crime against the Church in El Salvador. With solemn respect the pilgrim group filed into the cathedral in downtown San Salvador to pay homage at the martyr’s tomb.

Celebrating Mass in the chapel where Oscar Romero was murdered was for Deacon Bill Toller of Springfield, Mass., “a sacred encounter I will never forget!”

“Romero’s commitment to the poor cost him his life and yet he stood in solidarity with his people despite the risks,” Deacon Toller said. “I pray that I can be a prophetic voice in my ministry, always standing with the poor!”

Archbishop Romero reportedly became a stronger voice for the voiceless after the assassination of his friend Father Rutilio Grande, who had encouraged base Christian communities to stand up for their rights against an oppressive minority of rich landowners. The visitors stopped at the church where Father Grande had served and met Father Hector Figueroa, who knew the martyr and described the military repression that led to his death and the deaths or disappearances of more than 75,000 people.

Although El Salvador is still a dangerous, gang-ridden country with one of the world’s highest murder rates, the sites of the atrocities of earlier decades are today sanctuaries of peace where visitors remember the martyrs and draw inspiration from their example. The pilgrimage included a visit to the Catholic University of Central America, where a garden commemorates six Jesuit teachers, their cook and her daughter, who were gunned down by soldiers falsely believing the university to be a “refuge of subversives.” 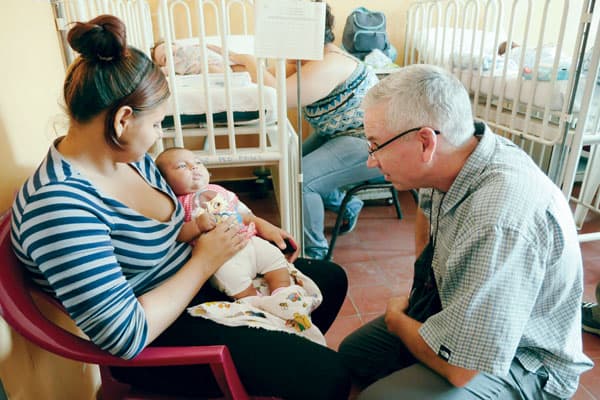 The group visited Santiago Nonualco, where four U.S. church women, including two Maryknoll sisters, were raped and murdered in 1980 for aiding the poor, also considered a subversive activity at the time. “Standing in a small field, in the shade of the trees where their bodies were found, was a deeply emotional experience,” Jan Peters said, adding that as the words of the four martyrs were read, “there was an almost tangible experience of their continued love and presence among the Salvadoran people.”

The group had lighter moments too, including observing veteran Maryknoll Lay Missioner Ann Greig making soy milk.
The pilgrims shared prayer every morning and reflections every evening. They celebrated the Sunday liturgy with parishioners at Cristo Salvador church, then crossed the road to visit the sick at a national hospital with Maryknoll Father John Northrop and members of his pastoral care group. Home visits with the poor and sick continued the following day, giving the pilgrims a peek into the lives and dwellings of a San Salvador neighborhood.

“I have learned from this trip that the treasure of every country is its people,” said Deacon Raymond Moon of Hemet, Calif. “The Salvadoran people are beautiful.”

Maryknoll Father John Spain, the group’s guide, who has lived in El Salvador for over 30 years, felt the immersion trip accomplished its goal. “The hope was to help give the group a sense of Salvadoran people, culture, church and history,” he said. “I was happy to share that. Maryknoll has a commitment to mission education and formation within the U.S. Church. We bring back information so that others can get excited about mission.”
The pilgrims go forth to light the fire. 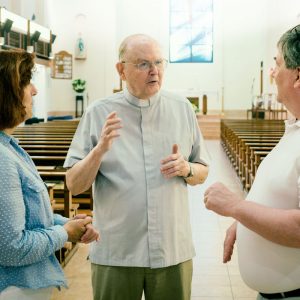