How I Became a Missionary Disciple

I first experienced being an outsider when I was in kindergarten in Amsterdam, N.Y. A classmate was a descendant of the Mayflower pilgrims and loved to remind us Italian-American kids that she considered us foreign intruders. But as the class put on costumes for Thanksgiving, I wore the feathered headdress of a chief and said, “Welcome to our country, paleface.” She never called us foreigners again!

Looking back, I see many moments where God was slowly forming me to become a missionary disciple who crosses borders of social class, race, religion, ethnicity and politics to find common ground in our humanity and stand in solidarity with the poor and oppressed—all in the name of Christ.

When I was in junior high, I sang in the choir of my Catholic parish for the Sunday morning Mass, and then ran two blocks with my friends to sing in the choir for the Presbyterian service. I was ecumenical before I’d ever heard the word.

Around that time, I skipped school one day in junior high to hear a campaign speech by young John F. Kennedy. When I was in detention for the absence, the vice principal sat with me and we discussed Kennedy’s speech. That man taught me justice with mercy. Inspired, I organized my friends into a two-block-long political parade with flags, posters and drums to support Kennedy’s candidacy.

In 1968, my friends and I attended the wake and funeral of Robert F. Kennedy. The local Presbyterian church offered us hospitality and I saw a Bible written in a strange language with circles and lines. “That’s Korean,” my friend explained. “I’d love to be able to read that,” I inadvertently prophesied.

That year, the first stirrings of a vocation inspired me to apply to the Franciscans. To my shock (and my parents’ relief) the Franciscans rejected me. Trying to discover the Lord’s will for me in the midst of failure was the most painful yet valuable experience and preparation for discipleship in my life.

I majored in Italian and German at Albany State, loving how languages opened up new ways of communicating and looking at the world. On March 19, 1970—St. Joseph’s Feast—I was one of 17 members of the War Resisters League to be arrested protesting the Vietnam War. The Quakers posted our $100 bond. Heading back to the dorm, we stopped to help a woman change her flat tire on the side of the road. She said, “It’s so nice to see young people like you, not like those troublemakers protesting the war.” God has a sense of humor.

After college, I joined the Peace Corps and taught English in Korea. There, I met my first Maryknoll missioner, Father Benedict Zweber. He seemed so full of life and joy as he selflessly served poor Korean fishing villagers that I was immediately drawn to Maryknoll. But how do you give your life to a group you hadn’t heard of 24 hours earlier? I tossed and turned all night. Finally, I prayed: “God, I will try to join Maryknoll. If it’s your will, help me. If not, stop me.” Peace filled my heart. I applied and, 40-plus years later, the rest is history.

God was preparing me for a life of missionary discipleship all along, and God continues to form and teach me every day of my life.

A Nonviolence Movement on the Border

Fruits of the V Encuentro 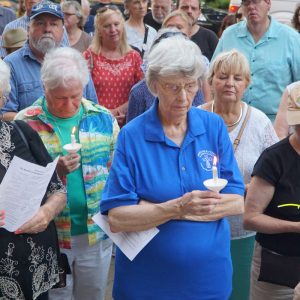 A Nonviolence Movement on the Border