Called to Fullness of Life

On a Wednesday morning, some 40 people crowd into the meeting room of Uzima Centre in the Ilemela neighborhood of Mwanza, Tanzania. It is time for the monthly meeting of a support group of neighbors living with HIV, and Joanne Miya, the center’s director, asks anyone who feels comfortable to share a bit of his/her story.

Monica is the first to speak up. When she first connected with Uzima Centre, she was weak and struggled with many secondary infections. Now, the center helps her obtain her medicines and she is part of its “Food by Prescription” program, which provides crucial targeted food assistance. “My health has improved a lot,” she says.

Monica has five children, three of whom are also HIV-positive and receive help at Uzima Centre. The center also helps pay for their school uniforms and supplies. “They are doing well in school,” Monica says proudly.

Johana says he is most grateful for Uzima Centre’s guidance about living with HIV. “That education has helped me to learn how to live with my condition, and the assistance with medicine has allowed me to stay healthy,” he says.

Uzima Centre has also taught him the importance of reaching out to others. “When you know someone who is in the same situation, the most important thing is to give them hope and to assure them that the diagnosis doesn’t mean they are going to die,” says Johana. “There is hope, and there is help. And most of all, I also tell them that God is there in their lives, that God is with them in all of this.” 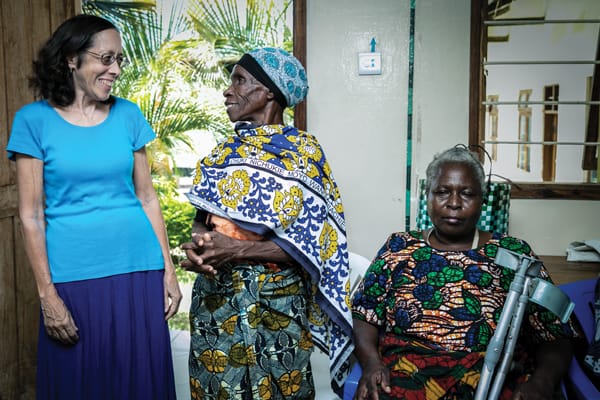 That kind of encouragement is what first brought Mary to Uzima Centre, after being invited by her neighbor. “I had no hope,” Mary says, “but now I am grateful that I have such a good neighbor.”

The center had its beginnings in 1997, when Maryknoll Sister Rosemarie Milazzo started meeting under a tree with a few women who were caring for sick relatives. Visiting their homes, she learned that most of the sick were suffering from AIDS. In 2005, as the program continued to grow, a small building—housing an office, a meeting room, a storeroom and a room for medical services—was constructed on the grounds of the Catholic church in Ilemela.

“We focus on providing hope, health and education,” says Miya, who has been the center’s director since 2006. “They are key both for our adults and the children because without hope, the rest doesn’t really matter. Without hope, you can provide all the education and medical care, but it’s not going to have real impact.”

At the core of Uzima’s approach are its support groups, which build community and solidarity among people living with HIV and become the place for peer counseling, sharing and mutual encouragement.

“Uzima in Swahili means fullness or wholeness of life,” Miya explains. “Our hope is that all our clients can have life to the fullest. That’s our dream. For each person, that would be different, but we are striving to help them individually be all that they can be in spite of the fact that they’re living with HIV.”

Today Uzima Centre provides services for about 300 people living with HIV—both adults and children. It also has a Saturday program for orphans and vulnerable children that assists another 100 children with educational support, activities and counseling and, for the secondary-school students, provides income-generating participation in its Bongo Beads craft production. 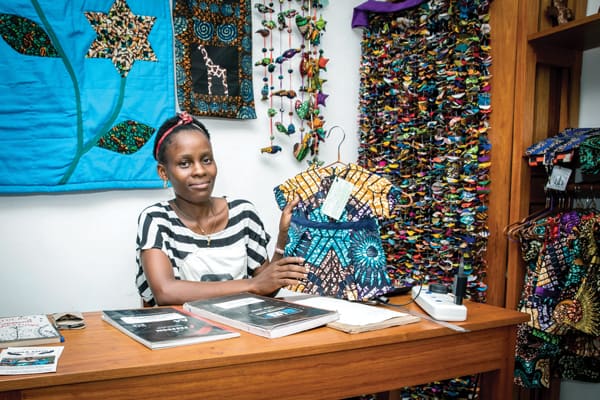 Beatrice shows the products made by people at Uzima Centre at the Vipaji Vyetu store in Mwanza. The store also sells crafts from other church-based charitable organizations. (J. Fleury/Tanzania)

However, during the support group meeting, a participant notes that because of a lack of resources, Uzima Centre currently can no longer register any additional adults living with HIV. He emphasizes that the need is great and many more people would love to join the program.

“It’s a challenge juggling what we do with what we have,” confirms Miya. And the progress that has been made in recent years with managing HIV infections is adding to that challenge.

“When I first joined this program, we had 30 adult clients who were HIV-positive.” Miya says. “Pretty much, it was a hospice program. We spent a lot of time going to funerals. The antiretroviral drugs were not yet available. Every month we’d register a few people, then a few people would pass away. The numbers stayed at around 30.”

Now the wide availability of antiretroviral drugs is keeping HIV-positive people alive. “Thank God the revolving door has stopped, but that has meant the numbers in our program just keep going up,” Miya says. “Now it is no longer about dying with dignity but about living your life to the fullest.”

Although, according to the United Nations, the prevalence of HIV/AIDS in Tanzania has gone down from almost 10 percent in 2000 to less than 5 percent in 2018, it still has the 13th highest rate of prevalence in the world.

“Here in Tanzania,” says Miya, “you won’t find a family that doesn’t have some member infected with HIV.” 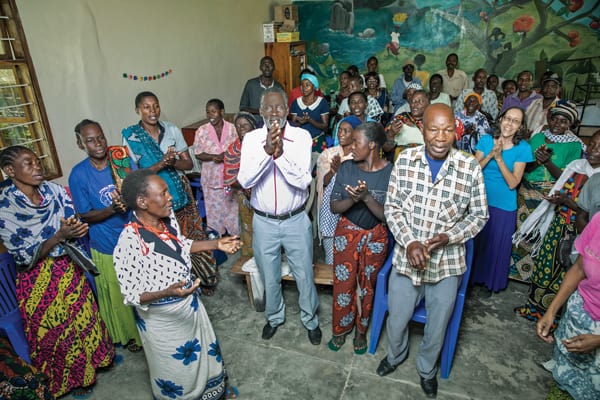 While the government has made free antiretroviral drugs widely available through government clinics, people still need help purchasing medications to treat secondary infections. Many can’t find adequate work to provide for their families’ basic needs. Miya is often reminded that people come to Uzima “not only because they’re HIV-positive, but also because they’re poor. Poverty is the root of many of their problems.”

Uzima Centre also has programs for children and young people, with ages ranging from 4 to 23, who were born HIV-positive and a prevention of mother-to-child transmission program that has been very successful.

Miya, who joined the Maryknoll Lay Missioners in 1983, is one of its longest-serving lay missioners. Reflecting on her many years in Tanzania—during which she raised four children, a stepson and an orphan—she says, “What keeps me here is knowing that even the smallest things I do make a difference.”

She adds that missioners are constantly learning from the people they serve and work with. “They become our teachers,” Miya says.

“Tanzanians tend to be extremely grateful and faithful. Their faith is very strong, which challenges me in my own faith,” she says. “They challenge me to trust in God in all things.”

Learn more:
For a video on the Uzima Centre, watch mklm.org/mklm-health-ministries-in-east-africa/

Jerry Fleury is a Los Angeles-based photographer. His website is imagesofthesoul.org. 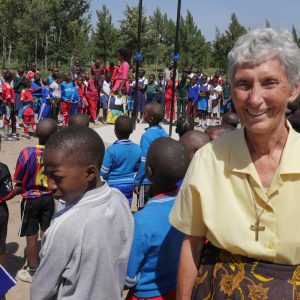 Maryknoll sister works to provide childhood education with a gentle and compassionate touch || When 6-year-old Agness...