Climate change is affecting food security globally through rising temperatures, changing precipitation patterns and greater frequency of extreme weather events, according to a new U.N. report. And, the report says, the situation is likely to get worse.

“Food security will be increasingly affected by future climate change through yield declines—especially in the tropics—increased prices, reduced nutrient quality and supply chain disruptions,” says Priyadarshi Shukla of India, a member of a working group that prepared the special report entitled “Climate Change and Land,” published in August by the U.N. Intergovernmental Panel on Climate Change (IPCC) in Geneva.

“We will see different effects in different countries, but there will be more drastic impacts on low-income countries in Africa, Asia, Latin America and the Caribbean,” Shukla says.

The U.S. Department of Agriculture estimates about 11 percent of U.S. households were food insecure in 2018 as a result of stagnant wages and other impediments to accessing healthy food. The USDA defines food security as “the ability to obtain and use sufficient amounts of safe and nutritious food.”

The new U.N. report says the impacts of climate change—including declining productivity, price shocks from extreme weather, and effects on food processing, storage and transportation—could lead to even lower levels of food security in the United States and worldwide.

The report highlights that climate change is affecting all four pillars of food security: availability, access, utilization and stability. Yet, the U.N. also says there are ways to reduce vulnerabilities, including adopting dietary changes and ensuring a variety of crops to prevent further land degradation and increase resilience to extreme weather.

The U.N. report estimates that about one-third of food produced is lost or wasted. Pope Francis includes this estimate in his encyclical Laudato Si’ and calls on us to remember that “whenever food is thrown out, it is as if it were stolen from the table of the poor.”

Faith in action:
• Read and share Chapter 5: Food Security of the UN IPCC report “Climate Change and Land.” https://www.ipcc.ch/report/srccl/.
• Explore the key findings of the Fourth National Climate Assessment, in particular Chapter 10: Agriculture and Rural Communities https://nca2018.globalchange.gov/
• Make a commitment to fasting once a month to raise awareness about food insecurity and pray and act for those in need. On the day of fasting, limit meal choices to climate-friendly, plant-based foods and limit spending to the amount allotted per day in the USDA Thrifty Food Plan for a family of your size. http://bit.ly/USDAFoodPlan 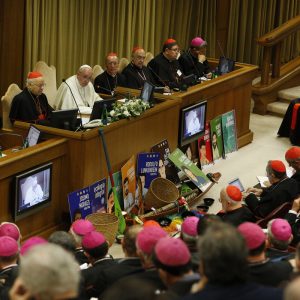 WEB-ONLY FEATURE: || The Synod of Bishops for the Amazon is a time of reflection, dialogue and listening to the needs...